Save the 2,008 proposals for reform to come before school board | News | Palo Alto Online |

Save the 2,008 proposals for reform to come before school board 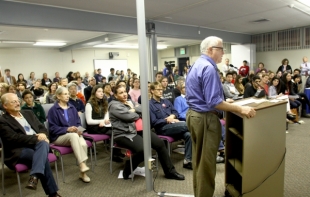 Former Gunn English teacher Marc Vincenti, co-founder of the "Save the 2,008" campaign, addresses the school board, parents, students and community members on Tuesday, Jan. 27, about the recent death of a Gunn High School student and the academic rigor students deal with on a daily basis. Photo by Veronica Weber.

1 person likes this
Posted by Paly Parent
a resident of Another Palo Alto neighborhood
on Sep 8, 2015 at 7:34 am

Some of these ideas are a good idea.

Question, how can the cell phone ban be implemented? Some teachers use cellphones in the classroom.

If they have to put them in a certain spot to ensure no usage during class, our Palo Alto students will have a second phone just to do that while they hold on to their main phone. I can't see that this is something that is worth spending time on.

Cheating is an important byproblem of phones in the classroom. But cheating doesn't appear to be the reason for attempting to ban them.

I applaud the efforts of Save the 2008. If this was around when I was in high school I would definitely of been involved in this group. I would urge Marc Vincenti to please rename "Six Steps to Sanity". Language like this is extremely ableist.

Report Objectionable Content
Email Town Square Moderator
8 people like this
Posted by We have a culture of impunity
a resident of Adobe-Meadow
on Sep 8, 2015 at 7:26 pm

44 Gunn students and 27 Paly students have signed up for five or more or APs.

This is a BROKEN system. Folks, that is insane.

Some students take APs because they are interested in those subjects, but even more take APs because of the weighted GPA rule created by UC. If the system won't change, the temptation to take as many AP and Honor classes as possible won't stop. It's getting worse since UC's admission rate for local students decrease dramatically in the past couple years (current high school parents can check the Naviance). When 6 out of 9 of UC campus have over 4.0 average GPA among admitted students, what does it mean to the students who are applying?

Since our schools generally do not allow taking APs in freshman or sophomore year (with very few exception of foreign language and math), and we all know the college application process starts in the beginning of senior year when there is no grade for classes taking in seniors yet, so our students are forced to pile up all APs in junior year to boost their GPAs and their chances for a good college (I mean UCs, not Ivies)! You think they want to drive themselves crazy? No! Our system forced them to do it!

Report Objectionable Content
Email Town Square Moderator
12 people like this
Posted by Better way
a resident of Gunn High School
on Sep 9, 2015 at 4:56 am

The saddest thing as far as I'm concerned is that most of what is learned that way is quickly forgotten. All that time and energy of these talented kids could instead be spent on building valuable real life educational experiences like answering a research question they pose themselves or building a business. Or spent volunteering after school, having friendships, being with their families. Speaking as someone who had no opportunity to even take an AP at my lousy small town high school, though I resented not having the opportunity at the time, I look back and was so better of for it. Instead, I had the chance (mostly out of boredom) to star in plays, travel regionally, experiment with teaching guitar (that was mostly a fail, but hey), attend outside youth group activities, go wilderness hiking and camping, learn several languages, commune with the desert, agitate for civic improvements, babysit, work in a research lab, garden, sing in choirs, run track, sew my own clothing, etc. i still got into a premier university and now I realize it was because all those things I did probably made me stand out. Was I behind my peers in college academically? Sure. But I caught up and even surpassed them, maybe because I was so motivated and not burned out. That is possible to do. What's not possible is to get that unique time and freedom back from high school years.

'Are they ready for fully innovative Indian food?' Ettan arrives in Palo Alto with chaat, caviar and a secret menu
By Elena Kadvany | 1 comment | 3,749 views

Flying: How to lower your impact
By Sherry Listgarten | 14 comments | 2,684 views