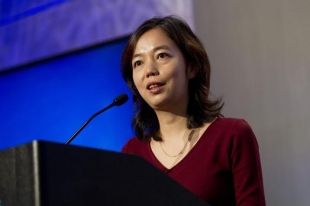 The "climate" smart car could invite a user when they start the car to use rapid transit as their destination can be readily served through rapid transit. The voice could be charming, and motivational like a work out coach. The climate smart car could communicate to transportation agencies and employers to help for on-the-fly ride sharing. The car suggests a stop to pick up a colleague - who knows the business might benefit through sharing ideas on the way to work.

The novelty of a self-driving car should be replaced by inventions that embrace a climate "smart car" to hep control climate impact by transportation. The Toyota/Stanford team can certainly develop the approaches, but their management needs to set a new goal for smart car systems to focus on controlling climate impact. That's a development that would clearly get some buzz.

Like this comment
Posted by Resident
a resident of Another Palo Alto neighborhood
on Sep 6, 2015 at 5:59 pm

We are quite used to seeing the Google self drive cars around Mountain View, but lately I have been seeing them venturing further afield and particularly in Palo Alto. I suppose we will soon be seeing these Toyota ones around Palo Alto also.

With all the increases in traffic, are these test vehicles going to help us all to drive better since they will be the ones obeying all the traffic laws without speeding, etc.?

Report Objectionable Content
Email Town Square Moderator
2 people like this
Posted by Joe
a resident of Another Palo Alto neighborhood
on Sep 6, 2015 at 9:03 pm

> In Palo Alto, at least 50% of our community climate impact is from transportation

"Climate impact" here in Palo Alto? What a joke! There are currently no metrics that can demonstrate any historic baselines for the "environment". What metrics are being monitored so that we can show that transporttion, or anything else for that matter, are "impacting Palo Alto, or the planet"!

Why not have the car refuse to start, and then chide the driver for owning a car, or living in Palo Alto!

Let's hope the Stanford/Toyota team realizes how many environmental zealots there are living in this towm, and ignores them all!

In another publication's article on this partnership, a Toyota spokesperson suggested that fully autonomous cars will not be available for a long time--which seems to be a view at odds with some other car manufacturers. Will be interesting to see just how long it takes for the first fully functioning self-driving car to take to the roadways!

What Local Teens are Saying
By Sherry Listgarten | 19 comments | 2,927 views