A 'structured and sane' reckoning with the end of life 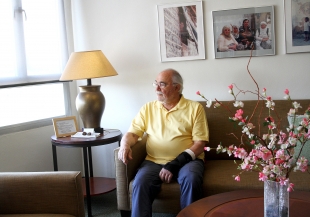 Peter Stangl sits in a lounge at Channing House that is used as a temporary library and bereavement room on Aug. 10, 2015. Stangl will be leading a six part end-of-life lecture series at Channing House in September. Photo by Veronica Weber.

Chris Kenrick is a contributing writer for the Palo Alto Weekly.

26 people like this
Posted by Some life experiences cannot be planned.
a resident of Greenmeadow
on Sep 7, 2015 at 11:30 am

Having just lost my beloved Dad after a two month stay in ICU, I can say that there is no planning for this. My father always planned for "no extraordinary measures.", but when the moment came, he wanted to fight for his life. We supported his choices and waited for him to tell us when he was ready to let go.

My family was thrown into heart-wrenching decision-making. As he failed, he was less able to communicate. It became harder to know what his wishes were. He broke through his medicated haze to finally give us a clear indication of his desire to let go--the saddest moment of my life to date. While he died our whole family was with him. I held his hand and felt his departure so fully. I cannot express how deeply I miss him. I don't regret letting him go, but I wish he had suffered less at the end. I miss him terribly every day.

I learned that, like most important life experiences, I really can't know what I might want to do until I am there. We did the best we could to honor his wishes. We will always always feel blessed to have shared a life with him. His memory will always be a blessing.

4 people like this
Posted by rational mind
a resident of another community
on Sep 7, 2015 at 3:58 pm

As our ability to keep the human body alive progresses we need to develop, as it is put in the title, a "sane" way of dealing with these critical issues. As a society we need a format or framework that will allow people to dictate, ahead of time, exactly how they want their care to be rendered as the end of life approaches. To a certain extent that can happen now with very well-crafted advance medical directives, but far too many people do no take the time to do this. I watched a dear friend pass slowly over a period of months after a critical injury in an accident - he never regained consciousness but his body was strong and it took a long time for his family to come to the decision to "pull the plug". In addition to the immense pain and grief caused to families and loved ones, this sort of care is incredibly expensive. Freakonomics recently did a great podcast about this: Web Link

It's something we should all give careful consideration to, and plan for.

Report Objectionable Content
Email Town Square Moderator
13 people like this
Posted by Craig Laughton
a resident of College Terrace
on Sep 7, 2015 at 5:01 pm

I would add that doctor-assisted suicide should be an option. Why not?

Report Objectionable Content
Email Town Square Moderator
3 people like this
Posted by Anneke
a resident of Professorville
on Sep 8, 2015 at 10:37 am

Death will come to all of us, and most of us will go through a terribly sad, grieving and unstable period when a person we deeply love passes away. Planning for this is nearly impossible. However, we can do much to help ourselves and each other by taking care of necessary actions beforehand, at a time when we are still healthy and can think clearly.

1. Set up a trust and/or will, and keep it updated (review it every three years.). Hire a good estate attorney, as the process is complicated. This is money well spent.

2. Identify an executor (we appointed our much trusted tax specialist, who is completely knowledgeable about our financial situation, since he has been with us for more than 25 years), and who is also a neutral person who will get things done. In addition, appoint a back-up person, who can be a long-term and trusted family member of friend. Meet with both and make sure they know all the ins-and-outs.

3. Execute a living will, which clearly states what you want when the time of dying has come. This does make it easier emotionally for family, friends, and doctors. File it with your primary care doctor, your executor and the back-up person. Also, discuss it in detail, so everyone is comfortable with it. If doctor-assisted suicide becomes legal in California, make your choice and write it in the living will.

4. In addition to dividing monetary assets, make a detailed list with pictures of all of your beloved physical assets, such as paintings, jewelry, china/silver, and assign each asset to a person you love. Sign it, date it, and review it every three years. Put it in your safety box and let your executor and back-up person know.

5. Make sure your pet or pets are included in your will, including monetary arrangements for their care.

6. Arrange your funeral/cremation arrangements and pay for everything in advance. (This was a difficult emotional experience for me, but we got it done.)

7. Write your obituary (together with a person you love.), put it in your safety deposit box, review it every three years, and let your executor and back-up person know.

8. Put a list together of all persons you would want to be notified. Include telephone numbers and addresses. Review and update it every three years.

9. Create a "bucket" list, and do a few things you really want to do when you are still healthy.

10. If possible, "give with the warm hand," an expression in Dutch, which means share your wealth with loved ones or organizations you believe in during your time of health. Learn to love giving, so you can enjoy the happiness it gives others. Remember, you will be buried or cremated with "empty pockets."

All of the above does not mean that emotionally it will be easier when time of dying comes. However, I strongly believe when your affairs are in order, it somehow may ease the dying process for everyone involved.


Report Objectionable Content
Email Town Square Moderator
Like this comment
Posted by questions for Anneke
a resident of Palo Alto High School
on Sep 8, 2015 at 4:28 pm

Thanks, Anneke, for your thoughtful and detailed list.
Questions:
How many people still have safe deposit boxes anymore? And who can access it and when after someone who owns one passes on?
What are typical fees for hiring a tax specialist to be an executor of an estate? It sounds like a good idea to me, I am just curious about the advance financial arrangement for the services.
Thank you.

To: Questions for Anneke

Thank you for your kind comments. Answers to your questions:

1. I know that most of our friends do have safety deposit boxes, specifically to store documents such as birth certificates, copies of passports, wills, etc. Renting one is very inexpensive and for us it is well worth it. The safety boxes are also protected from fire.

2. Our Estate attorney, executor and back-up all know about the safety deposit box and the specific location of the key, so they can open it. We have also written a signed letter that allows them to open the box.

3. Good question on the fee of the executor. I am sure it depends on the amount of work that is involved. Our tax accountant has always been very reasonable, so I expect the same for executing the trust and will. However, I will investigate and post another message. There may be an official charging rule.

4. We made all the pick-up, cremation and funeral arrangements with Alta Mesa. I suggest you meet with them. They have a choice of packages available, and, honestly, they will take care of everything. The costs, again, depend on your wishes. I believe our package was about $3,000 per person, which has already been paid and put into an interest bearing certificate. You get this money back in case you decide not to use the services of Alta Mesa.

It is so important to take care of all these items. If you don't, you add significantly to the grieve of the people you love, who may make the wrong decisions in this very time of instability.

I agree that physician-assisted end of life measures should be part of the discussion. And I hope that discussion includes terminology. Those facing wrenching end of life decisions while suffering from an incurable, debilitating disease hardly need to also cope with the guilt that is often associated with suicide.

'Are they ready for fully innovative Indian food?' Ettan arrives in Palo Alto with chaat, caviar and a secret menu
By Elena Kadvany | 0 comments | 3,572 views

Flying: How to lower your impact
By Sherry Listgarten | 10 comments | 2,520 views