Wildcats trap Stanford in Evanston, make off with 16-6 football win 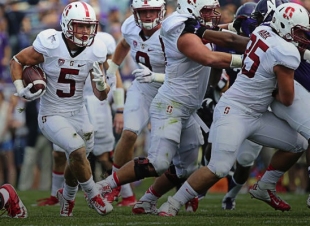 C'mon Shaw, we've been hearing these excuses for too long now. Get someone who knows how to call plays, get a QB that doesn't wind-up to throw, and get your troops in order!

3 people like this
Posted by sports fan
a resident of Another Palo Alto neighborhood
on Sep 5, 2015 at 9:38 pm

The conservative and predictable play calling in the 2014 Rose Bowl loss which persisted right to the end of the game which was simply inexplicable, and failure to respond to what was happening on the field,needed to be addressed.

Mike-Crescent Park is a registered user.


The truth is we really didn't do anything it takes to be a winning team in this game. Except punting and extra points. Unfortunately you can't build a winning season on kicking alone.

This is a return to the things that lost games last year except now it's all the failures occurring together, not spread randomly from game to game. Blocking, dropped passes, poor passing, porous secondary, play calling, penalties and weak defensive line.

We lived through the really dismal losing years a while back because our expectations were set low. Our expectations are high for this year but I think the smart thing to do is reset them much lower. That looks like what we have unless this team was inexplicable asleep at the wheel but will wake up for games from here on out.

I expected more of Shaw in ability to train and coach this team to play well. There was no playing well Saturday.

I have been a Stanford fan since the 70s-as fans winning is a lot more fun than losing. I think it is for them too.

Clearly a well played game by no one. Stanford laid one gigantic EGG on the farm. Enough to feed scrambled eggs to the entire student body. Well.....no problem.....Mr. Shaw will let his quarterback call the plays this next game against the Florida Tech bunch.....or what?.....oh it's not Florida Tech. Well.....anyway, maybe they can muster up a win. Stanford has given it's name to the ESPN Bottom Ten for future consideration.

Reminds me of the good old days of Coach Harris. this is absolutely the worst stanford has been (and not just with the ultra and ineffective play calling that we have seen over the past few years)--throughout the whole team since Navy visited Stanford on opening day of the new stadium. never have we seen the team as flat and unergized as that team over the past 40 years--until Saturday. that was an atrocious exhibition by the entire team. No energy. no desire. no effort. no play calling. no defense. no offense. AWFUL!!

Report Objectionable Content
Email Town Square Moderator
3 people like this
Posted by Shallow Alto
a resident of another community
on Sep 7, 2015 at 2:03 pm

What a shame UC Davis didn't play this year's version of the Stanfurd Cardinal...