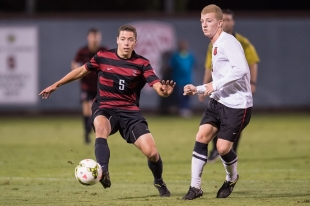 Slater Meehan’s late, first-half goal proved to be the difference in a dominant effort for the No. 16 Stanford men’s soccer team. Photo by David Bernal/isiphotos.com

Can you Pay to Reduce your Carbon Footprint?
By Sherry Listgarten | 8 comments | 2,117 views

You Can Help: Scents and Migraines
By Chandrama Anderson | 0 comments | 1,861 views