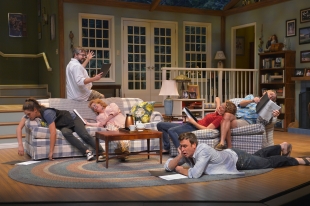 A reading of Uncle Elliot's debut play leaves the rest of the family exhausted in TheatreWorks' production of "The Country House." Photo by Kevin Berne.

Edward Syrett is a registered user.


A very good review of a most enjoyable production. One aspect I enjoyed, at the very end, was what happened after the cast took their bows. Rather than leaving the stage, they remained in character and withdrew to the "garden", visible, thanks to imaginative set design, from the living room where most of the action takes place. That added a "life goes on" touch to the drama. It reminded me of the Beatles' "sha-la-la-la life goes on" from Oh-Bladi-Blada.

What Local Teens are Saying
By Sherry Listgarten | 19 comments | 2,824 views