Vanjak rises to the occasion in Cardinal volleyball win 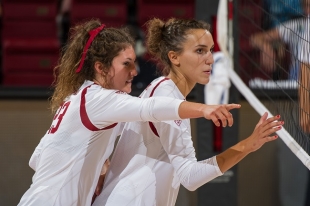 Stanford's women's volleyball team may be the only program in the nation that could survive the loss of a first team All-America middle blocker to injury. Losing two of them may have been too much to ask.

Redshirt sophomore Ivana Vanjak stepped into the middle-blocking role two weeks ago, after spending the past two years as a left side opposite. The 6-foot-4 German native recorded eight of the team's 20 block assists to more than hold her own in the absence of Inky Ajanaku, out for the year with a knee injury, and redshirt sophomore Merete Lutz, out for the time being with a finger injury.

"It was super awesome how Ivana was able to step up," Cardinal senior outside hitter Brittany Howard said. "You have to fill the gaps and she worked hard. I also credit Inky and Merete for helping her. They acted as two extra sets of eyes."

Stanford players learned Ajanaku would miss the season during the summer, giving them all a chance to make their own adjustments.

Lutz, who recorded a team-high 21 solo blocks and 143 overall last year, could miss Sunday's 1 p.m. match with visiting Minnesota but should return by the time the Cardinal travels to State College, PA for matches against No. 8 Illinois and defending national champion Penn State next weekend.

"She's athletic and solid," Stanford coach John Dunning said of Vanjak. "She's smart and has experience in our gym. She made the team better. It's not easy, not she was up to the task."

Howard and fellow seniors Jordan Burgess and Madi Bugg carried the bulk of the offense, combining for 29 of the 41 kills, 30 of the 39 assists and most of the blocks not credited to Vanjak.

"We've known each other and played with each other since we were 14 years old," Howard said. "We know each other so well. We didn't need to work on our connections. It was good to work with the younger players."

Stanford's starting lineup included three freshmen and a sophomore, with opposite Hayley Hodson playing more like the seniors than a freshman. Hodson, who recorded 10 kills and 11 digs, showed the poise of a veteran.

Two other freshmen, middle Tami Alade and libero Halland McKenna, made their collegiate debut in front of 1,617 fans, the Stanford band and in a match that was televised.

"I asked one of them earlier in the day how she felt," Dunning said. "She said 'nervous.' I thought, that's great to admit. They were showing poise."

"They got to a lot of balls," Dunning said. "Sarah is motivated from last year. She's skilled but didn't think the year went the way she liked. She wants this year to be different. She wants to be better."

These local restaurants are donating meals to Bay Area residents in need. Here's how to help.
By Elena Kadvany | 6 comments | 11,080 views

Coronavirus: Plan ahead now for a big outbreak
By Diana Diamond | 19 comments | 4,096 views