Who will benefit from Palo Alto's higher minimum wage? 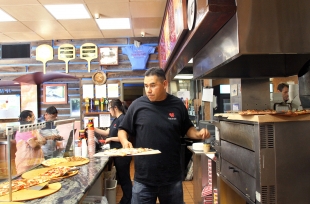 Jorge Garcia, a delivery driver and counter assistant at Pizza My Heart, warms up slices for customers during the lunchtime rush on Aug. 26. Pizza My Heart recently raised their base wage to over $10 an hour, and in turn raised their pizza prices to cover the costs. Photo by Veronica Weber.

It's all political cronyism. You can tell by the exemption of labor unions. Our CC follows LA lockstep. To the extent it has any economic effect, it only hurts the unskilled trying to start out.

The article asks, "Who will benefit from Palo Alto's higher minimum wage?"
The losers are people who desperately need jobs - people with no work history, no job skills, language difficulties, physical deformities, minorities, new immigrants, or just plain unattractive people. Palo Alto has hung out a sign that says, "If you are not worth at least $11/hour, there are no jobs here for you."
Obviously, unions are the big winners. They eliminate low-cost competition, and can collect the difference between the City minimum wage and the national minimum in dues.
Fast food restaurants will be winners, too. They use capital equipment to reduce their reliance on labor.
Consumers (all of us) are losers. We will pay more for goods and services, and the supply of goods and services will be reduced. Fewer shop clerks, fewer independent restaurants, higher prices everywhere.
We elected this City Council, and they serve us right.


I wonder how many of the people who voted for this pay all of their own domestic help $11/hr?

Report Objectionable Content
Email Town Square Moderator
12 people like this
Posted by Hard work, low pay has impacts
a resident of Another Palo Alto neighborhood
on Aug 28, 2015 at 11:22 am

To answer, "Where were they?" If folks are working for minimum wage in Silicon Valley, they are working two or three jobs to make ends barely meet. They are probably spending hours commuting because there is so little affordable housing here. Their days are filled with hard work and little rest. Getting to a public meeting to say, "thank you" is a low priority in their lives--appropriately. They get so little time with their kids, they need to get home when they can.

How do I know this? I used to teach inner city kids. Theirs is a VERY hard life. I admire them. I doubt the increase will help much, but I hope that this opens a broader discussion about how the 99% can be more properly compensated for what they contribute to our society.

Hmmm is a registered user.


Let's not forget that there are also mature, educated, experienced adults working second jobs for minimum or low wages.

Peter Carpenter - even with our budget, we've paid domestic help well beyond $11/hour - and we've provided meals and tips, too.

Sparty is a registered user.


I see more "temporary" workers in the future. I've seen temps who worked at the same place for almost 3 years....it was cheaper to pay $22-25/hr to their agency than it would have been to pay them for their entry level jobs + benefits. This was in Palo Alto at a place with 400 full/part time
employees

Report Objectionable Content
Email Town Square Moderator
2 people like this
Posted by SteveU
a resident of Barron Park
on Aug 29, 2015 at 10:36 am

SteveU is a registered user.


Why were none of these low paid jobs present at the city hall meeting?
<slap>
They were working a second job or lived out of town.

The whole USA Wage thing is out of whack. The typical Minimum wage worker needs to work 70-90 Hours a week just to rent 2 bedroom housing. It would take 90 hours just to pay the rent on the bungalow across the street. That is using 100% for the rent.

Report Objectionable Content
Email Town Square Moderator
2 people like this
Posted by BernieSanders2016
a resident of Midtown
on Aug 29, 2015 at 3:59 pm