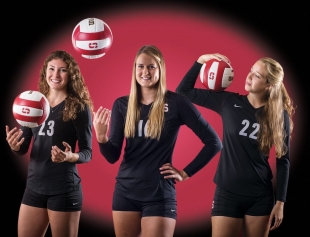 Seniors (L-R) Jordan Burgess, Brittany Howard and Madi Bugg were part of the nation's top recruiting class in 2012. They all return for Stanford, but they'll be missing senior teammate Inky Ajanku, who is sidelined for the season. Photos by John Todd/isiphotos.com (Photo illustration by Paul Llewellyn)

Like this comment
Posted by William Tomlinson
a resident of Palo Alto High School
on Aug 28, 2015 at 11:17 am

You are a PA student? Try reading again. Sigh

Like this comment
Posted by William Tomlinson
a resident of Palo Alto High School
on Aug 30, 2015 at 12:31 pm

Digital content can be easily edited by its creative source. When I read the article several hours before you did, the article indicated that Penn State and Stanford were tied with 6 women's NCAA volleyball titles. I should have cited the original statement.