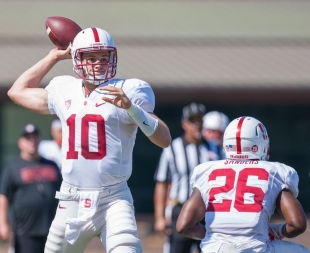 2 people like this
Posted by maddogsfavsnpiks
a resident of another community
on Aug 25, 2015 at 12:23 pm

According to my observations, some of which were from a less than ideal vantage point, at ground level clear across the field, the OL did a very good job of opening holes and lanes for the RBs :

Obviously the dazzling run by Bryce Love gave the above stat/avg a significant boost. He showed excellent vision and well-tuned cutting ability, ultimately eluding tru-frosh DB Quentin Meeks' flailing grasp, before he broke into the clear with an eye-popping burst of speed, outrunning everyone by at least 5 yards to the TD. The left side of the OL, got a great surge off the ball in the initial part of the play, and B. Love made an excellent cut to his right, then back to his left eluding Meeks, before dashing into the open. (At that time, as far as I could pick out the jersey numbers, the OL included Davidson, Bright, Burkett, Fanaika, & Hall).
As for the all-important D-Line, if you subtract that one run by B. Love, they had a respectable day against the run, allowing about 110 yds on 25 carries. Both Scarlett and Shittu got good penetration, blowing up several plays before they got started. Thorsten Rotto, tru-frosh Wesley Annan, and others all contributed stops along the way.
On passing plays I counted 6 or 7 virtual sacks (To protect the QBs, actual take-down sacks were not allowed).
IMO, both sides of the ball have significant work yet to do in order to be ready for the dangerous trip to the Cat House in Evanston on Sept. 5th, in just 10 days or so... not to mention the trip to Trojan Man's House of Ill-repute, on Sept 19th.

Flying: How to lower your impact
By Sherry Listgarten | 14 comments | 2,692 views