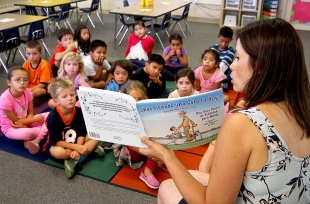 First-grade teacher Angelina Rodriguez reads to her students in Spanish in their Spanish immersion classroom at Escondido Elementary School on Aug. 19. Lessons are taught 90 percent in Spanish and 10 percent in English in first grade at the school. Photo by Veronica Weber.

It would be nice if the immersion programs are open to more students or at least SOME sort of second language classes open to ALL students beginning in kindergarten.

As a parent of the first immersion class, I agree wholeheartedly with your vision of more access to second language language acquisition starting in kindergarten. I recommend that if you are interested in growth of the PAUSD immersion programs or some sort of second language acquisition in K-5, work together with the PAUSD School Board to help them realize this vision. Parents and teachers of both the Spanish Immersion and Mandarin Immersion programs were cohesive groups that worked closely with the school district to brainstorm solutions, raise funds, educate the community, and advocate for the program.

Program is a waste of time and money. We need to have the children learn Science and Math [portion removed.] If kids study another language it should be Chinese because that is the future power nation on the planet.
Wasting time on these kinds of programs is why the Education system and children it graduates make the US 23rd in the world.

Report Objectionable Content
Email Town Square Moderator
5 people like this
Posted by @jerrey99
a resident of another community
on Aug 21, 2015 at 3:14 pm

"We need to have the children learn Science and Math [portion removed.]"

(1) Nothing keeps these kids from learning science and math while they are learning another language.

(2) Calling Spanish a "useless language"? Really? You have to go *there*?

Countries that appear high in world ratings spend more days and more hours in the classroom and spend time learning one, if not more, foreign language from a very young age.

The census bureau announced on July 6, 2015 that Hispanics outnumber Caucasians in CA. The only other state with more Hispanics than Caucasians is New Mexico. Does anyone know the percentage of Asians in PA. I bet it's around fifty percent.

Report Objectionable Content
Email Town Square Moderator
2 people like this
Posted by OPar
a resident of Duveneck/St. Francis
on Aug 21, 2015 at 9:23 pm

Nope. Asians were 27 percent of the Palo Alto population according to the 2010 census. I'm sure the percentage has gone up, but it's not 50 percent because there hasn't been that much population turnover or growth since the city's pretty built out.

Report Objectionable Content
Email Town Square Moderator
3 people like this
Posted by Molly K
a resident of Greenmeadow
on Aug 22, 2015 at 9:28 am

Hi jerrey99 -- Just want to note three things for you:

1) I'd agree that learning Mandarin is a really valuable skill in today's global economy. That's why Palo Alto established a Mandarin Immersion Program in 2007, in addition to the Spanish Immersion Program. Both programs have been very successful.

2) The language immersion programs in Palo Alto are revenue-neutral, so it's hard to argue that the program is a waste of money.

3) Students learn science, math, and all other subjects in Spanish (as well as English). They actually end up scoring higher on standardized tests across the board -- including in science and math.

Report Objectionable Content
Email Town Square Moderator
2 people like this
Posted by Hmmm
a resident of East Palo Alto
on Aug 22, 2015 at 9:47 am

Interesting to see the balanced comments responding to the ignorant comments. And people like to pretend that racism isn't a problem in Palo Alto! It's great that accurate information, once again, combats ignorance. But can it erode hatred and create respect?

Report Objectionable Content
Email Town Square Moderator
4 people like this
Posted by Resident
a resident of Another Palo Alto neighborhood
on Aug 22, 2015 at 11:56 am

The biggest problem with the immersion programs in Palo Alto is that they are for a few lucky lottery winners and nobody else gets anything. If FLES was available for Al. It would be more equitable. And this has nothing to do with racism