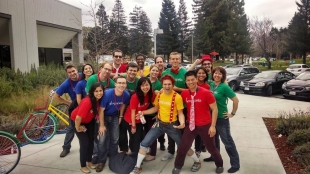 Members of Googlepella will be among the five a cappella groups -- all from Silicon Valley companies -- performing at a free Menlo College concert on Friday, Aug. 21, from 5-8 p.m. The concert takes place at 1000 El Camino Real, Atherton. Photo courtesy of Google.