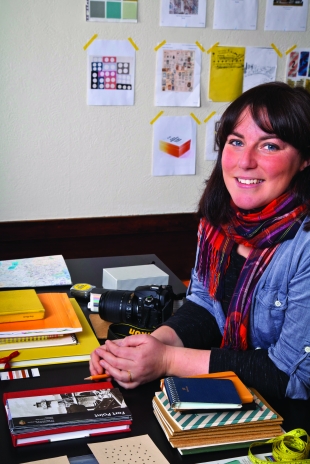 Artist Kate Pocrass is creating a happiness map of Palo Alto that will be available for free to the public. Photo by Stian Rasmussen.

What an incredible waste of money! I work hard to pay my taxes, and then the city blows that money on something stupid like this. If this map is such a good idea, find a private donor to fund it, not us taxpayers who have no say in the stupid projects the city does. Next time there's a tax increase on the ballot, I'll be thinking about the Happiness Map!

You want to conduct polygraph examinations on all Palo Alto high school students, and you complain about the cost of THIS?

Weren't there more comments here following the original Aug 20 upload of this article? Where'd they go?

I guess this republishing is publicity for next weekend's opening of the exhibition.

Report Objectionable Content
Email Town Square Moderator
4 people like this
Posted by HUTCH 7.62
a resident of Old Palo Alto
on Sep 12, 2015 at 8:52 am

Are there any happy places left in PA? Even Stanford is loosing it's once vast open space to sprawl. Out with the good and in with Gluten seems to be all the rage these days

ralphc is a registered user.


I grew up on Edgewood Drive and am pleased that someone posted a picture of the buckeye tree by the Newell bridge. In the '40s I considered it magic as you could drop a buckeye through an opening above and it would emerge near the bottom of the tree. How great that it is still there!

Report Objectionable Content
Email Town Square Moderator
2 people like this
Posted by Longtim resident
a resident of Another Palo Alto neighborhood
on Sep 22, 2015 at 2:07 pm

As I sit here today, the sounds of birds and the wind are drowned by traffic, nail guns going at a furious pace, aircraft, and other such unhappy noises. A quiet afternoon, with a cool breeze, birds singing, that is a happy place for me, which I find so infrequently here anymore.

I think it's a brilliant idea, though. I'm glad to take a copy of the map and find more happy places.

Why isn't there a photo of this map to accompany the story? To me this is inadequate reporting.


Great question, rhody. The map was not actually yet created at time of publication of this story (August 20). As of this week, the map is complete and available to the public as a hard copy. No digital version of the map has been made available yet, but we'll have it up on our site as soon as we've got it!

Even $5,000 to print this happiness map is too much. Why not just leave it online?

Why are city employees even spending time on this trivial project? It's akin to that other infamous Palo Alto project, the color of Palo Alto.

What city employee can we talk to to express our astonishment that city time and money is being spent on this outlandish effort?

You could contact either Karen Kienzle (director of the Palo Alto Art Center) or Claudia Keith (chief communications officer for the City of Palo Alto), both of whom are quoted in the above article. Karen Kienzle can be emailed at karen.kienzle@cityofpaloalto.org or reached at (650) 329-2366. Claudia Keith can be emailed at claudia.keith@cityofpaloalto.org or reached at (650) 329-2607.