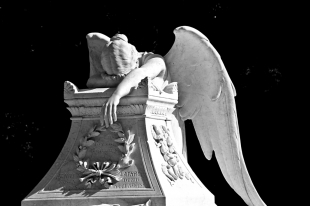 The Angel of Grief statue at Stanford University, prior to the most recent vandalization. The century-old statue's forearm was removed earlier this month. Photo courtesy of Elliot Margolies.

This is my favorite piece of art at Stanford - the Angle of Grief is a sublime work and touches me deeply. It is located in a quiet spot on campus and allows me to think of those I love and miss.

I am deeply saddened that someone would harm this statue.

Some people are just terrible. I love this statue and hope that those at fault are caught!

Jay Thorwaldson is a registered user.


This lovely statue has been vandalized in the past, losing its right forearm. In the 1960s when riding bikes with my sons we would go past the mutilated statue. Perhaps a reward for information leading to the whereabouts of the missing "trophy" arm might point to the culprits.

Report Objectionable Content
Email Town Square Moderator
6 people like this
Posted by moi
a resident of Another Palo Alto neighborhood
on Aug 19, 2015 at 7:12 pm

Senseless act by a senseless person.

Sounds to me that the statue needs to be moved to a more populated place - in the central quad. This brings to mine all of the ancient statuary that is being destroyed in the ancient lands - there is a whole mind-set at work that keeps wanting to destroy old, valued pieces of art.

Report Objectionable Content
Email Town Square Moderator
2 people like this
Posted by when
a resident of Old Palo Alto
on Aug 19, 2015 at 8:18 pm

When do fraternities pledge at Stanford? Just asking.

Report Objectionable Content
Email Town Square Moderator
4 people like this
Posted by Nayeli
a resident of Midtown
on Aug 20, 2015 at 10:31 am


Sometimes, I wish that individuals who are caught stealing, desecrating public or private property or hurting others could be sentenced to wearing mittens -- big fluffy pink polka dot mittens -- for the duration of their sentence. They should be so thick that a person has to eat a hamburger with a spoon.

I just wish that there was a way that they couldn't be removed. If these people have no shame for their crimes, then society should shame them. Apparently, this lack of shame and a moral compass is making it easy (and even proudly audacious) for them to commit senseless crimes.

If sex offenders can be registered by society, perhaps it is time to do the same with murderers, assailants, thieves and vandals too.

Report Objectionable Content
Email Town Square Moderator
Like this comment
Posted by when will they stop this chat
a resident of Green Acres
on Aug 20, 2015 at 8:24 pm

Report Objectionable Content
Email Town Square Moderator
2 people like this
Posted by Phyllis
a resident of Another Palo Alto neighborhood
on Aug 20, 2015 at 8:48 pm

This is probably theft, not vandalism. The theft of statuary has become a trend over the last few years. Bronze statuary is sold for scrap metal, if a buyer can't be found.