Whitney Dafoe: 'When I crash' 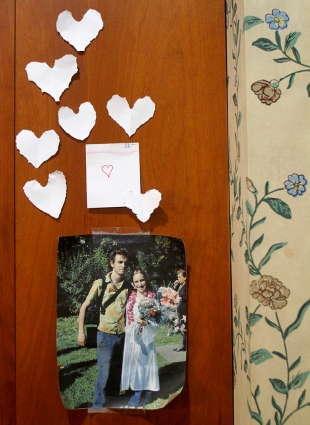 Torn paper hearts created by Whitney Dafoe are placed above a photo of Whitney and sister Ashley Davis in his family’s kitchen. Photo by Veronica Weber.

This is the precise problem with ME/CFS research in a nutshell. I also have been diagnosed with ME/CFS, possibly incorrectly as I had a gradual onset and a progressive disease course, but my PEM crashes are nothing like what Whitney describes. For me it feels like I got stomped on by a pissed off horse for weeks following physical exertion. My whole body hums for up to a week following strenuous (or even moderate) physical exertion and then it feels like someone let the air out of it and can take weeks or longer to recover. As long as patients like myself and Whitney are studied together as if we had the same disease, I think little progress will be made. Subgrouping patients into homogeneous cohorts is the key to the whole thing. Thank you so much to the Palo Alto Online for such a collection of sensitive articles and good luck, godspeed and thank you so much as well to Dr. Davis for his work.

I read this and cried in July and still thinking of Whitney and hoping that this article has led to some positive outcomes.

It is inspiring and extremely difficult to hear Whitney's story.
I'll share my story if it's of interest to anyone:
I have been an ME/CFS patient for 7 years and it has been an overwhelming journey. Initially, I was confronted with disbelief from doctors who told me I was a healthy 21 year old- possibly with anxiety, they proposed. This after I explained how difficult it was to move my arms and how I had lost most of my previous strength in the arms and legs after getting a bad flu-like virus that didn't improve. At its worst, I couldn't speak. And I was bed-ridden for about a year.
In 2009, I met a qigong master (from China) in Santa Barbara who was able to treat the illness with energy work. She explained to me that having such a deep illness for so long had caused many channels and meridians to become blocked. She was able to unblock the meridians with qigong healing. Essentially, she sent universal chi to the areas that had been most affected by the illness. During the session, I could actually feel the energy returning to areas of my body that had been sick. She described it as taking out "illness chi" and putting in "healthy chi". Within 3-4 months, through her treatments, I had recovered 70% of my health after being so sick that I never thought I would improve. When I was at my sickest and there was no improvement for over a year, I never would have thought I would find someone who could send energy to areas of my body and get it working again. I would definitely recommend that anyone with severe CFS find a qualified qigong master, but unfortunately they are very difficult to find and the results are not always as smooth as I had. But from my experience, that was the best treatment. I would recommend the teacher I went to, but I know she probably wouldn't like me to broadcast her name on a forum.
I still have a long road ahead with this illness, it has permanently changed my immune system and I probably won't ever to have a normal work life. But to go from how sick I was to where I am now has been very hopeful.

Thank you to Dr. Davis and the ongoing research on ME/CFS.

John, Whitney described his disease progression as progressive and gradual onset as well. Sounds like you have that in common.

There were to s of comments after this story that have just disappeared. Am I the only one who has noticed that hapoening on any number of threads lately? Weekly, have you been hacked again??

I became ill in December, 1987, with what was later diagnosed as Epstein-Barr virus. It is the same old story. Too, too tired; can't do anything; every body system affected; have used nutrition with many supplements, acupuncture, homeopathy, antivirals in addition to conventional medicine. Is there no end?

I have fibromyalgia probably since I can remember. I am 54 years old now. I have learned self energy healing from a meditation center whose URL is Web Link. There are 2 local locations in Milpitas (bigger) and San Francisco. 510-676-6185 and putisfo@gmail.com.

Until over 4 years ago, I had tried all sorts of main stream and alternative medicine approaches. Now I am in my 5th year of doing their therapeutic, standing or walking, meditations. Their methods beat all the other methods.

Over there, miracles are common. I know this sounds con-artist-ish. But I heard many miraculous testimonials there in person.

My own conditions have been steadily improving albeit slow. I guess half century of fibromyalgia is something. But again, their methods beat all the other methods. I do it one hour per day. I could not afford paying a healer $100 per hour every day.

Report Objectionable Content
Email Town Square Moderator
6 people like this
Posted by margot sis
a resident of Another Palo Alto neighborhood
on Oct 20, 2016 at 2:38 pm

I visit Palo Alto Online often, specifically to try to check up on how Whitney is doing. Unfortunately there hasn't been any new information for a long time... just the older stories & comments. It sure would be great if a PA Online reporter were assigned to write an occasional update, or even better: a regularly timed update.

There are many sympathetic well-wishers out here who have no access to that info, but who care so much for the young man, his family, and for other CFS/ME patients. Sharing Whitney's updates would provide help to other caregivers and might spark treatment options for other patients.

Best Wishes to Whitney and blessings to Dr. Davis and family.