Plane accident in 2010 cut electricity to Palo Alto for hours 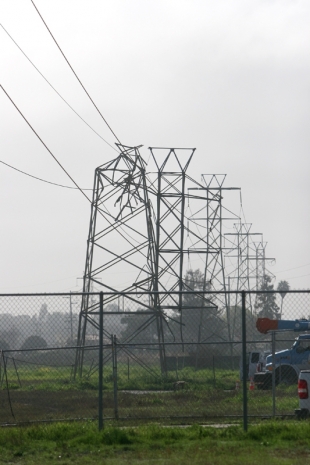 4 people like this
Posted by Resident
a resident of Another Palo Alto neighborhood
on Feb 13, 2015 at 8:23 am

Thank you for doing this article.

The fact that nothing has been done to prevent a similar occurrence is indeed astounding. It is not the possibility alone of another similar sort of accident, but what of deliberate sabotage? How easy it must be for someone who wanted to bring PA to a standstill to cause another day the Earth stood still is particularly worrying.

We have the President in town today - what a day it would be if we lost the power yet again!!!!

This is the same single set of power lines that crosses the Mings property, with a support tower in the parking lot. I'm sure the demolition and construction crews will be careful.

Report Objectionable Content
Email Town Square Moderator
3 people like this
Posted by Resident
a resident of Another Palo Alto neighborhood
on Feb 13, 2015 at 5:48 pm

Musical - Are you tempting fate?

Even five years later, I think we would be in a worse situation if the whole city lost power for the whole day. We have a lot more business infrastructure and many more housing and other buildings that have elevators. Apart from people getting stuck inside, the need for elevators in so many structures mean that some people would be stranded inside or outside.

Also, many of these new developments are windowless or have windowless rooms, particularly bathrooms. These rooms would be pitch dark without power.

Traffic is also a lot worse now and a lot more of our school buildings would be much too dark for the students to see the teachers or for the teachers to teach.

It is ridiculous that nothing has been done to improve the power situation here.

Despite losing our power the other night in the storm, the last outage we've had would have been the Tesla plane incident, which is a pretty decent track record.

The 230kV project seems like a non-starter as described here, given the enormous cost. For $200 million you put almost $10K worth of solar panels on every house in the city.

Flying: How to lower your impact
By Sherry Listgarten | 19 comments | 3,459 views

My angst about the disaster of these two debates
By Diana Diamond | 34 comments | 2,033 views