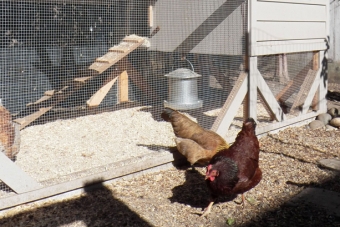 The self-guided tour of 12 coops and gardens will take place Saturday, Oct. 27, in Palo Alto, Los Altos and Los Altos Hills. Backyard urban homesteaders will share their experiences with cyclists and display their coops, bees and organic gardens.

Organizer Scott Vanderlip said he was inspired to start the Tour de Coop after learning about the Tour de Cluck, which has taken place in Davis for the past three years.

"You don't realize the amount of activities and fun things that are going on in people's backyards: urban homesteading, composting, vermiculture (worms). Chickens combine that loop. You get fresh eggs, poop, compost -- and it's a great way to connect with people," he said.

Vanderlip, a Los Altos Hills resident, has kept chickens for five years. He currently has five: Doodles, an Americauna; Mimi, a buff cochin; Rosie, a Rhode Island red golden sex-link; and two black Australorps, Feathers and Percy. Each comes with a distinct personality.

"One can be stubborn, and another can be really wild," he said.

Five Palo Alto coops will be on the tour, in addition to six in Los Altos and one in Los Altos Hills, he said.

Aside from the obvious perks of fresh eggs and an interesting new project, Palo Alto coop owner Anwyn Hurxthal said her family was drawn to the idea of having backyard chickens to deepen their ease with different species other than dogs and cats that live in an urban setting.

"It was our way of reaching, ever so slightly, past standard urban homemaking into the wider experience of our food chain. What started as a desire for freshly laid eggs and a cool coop has resulted in a deep respect and appreciation for these two individual birds, now feathered members of our little urban clan," she said.

Seven-year-old daughter Jessa Collins said: "When you get chicks they're really cute, but as they grow older they're even better because they actually love you back."

O'Malley Stouman's California Coop was designed by her architect husband, Jonathan. The tri-level structure has a pagoda-style roof and is made from recycled wood. A solid cinderblock floor keeps predators from digging underneath to get the chickens, she said. The birds also have an automatic feeder and water dispenser for when she is out of town, she said.

Stouman's chicken photos have become so popular with family and friends that she started a website, workdaychickenpictures.com, to give people a laugh each day before they set off for their jobs. She has 750 subscribers and a Facebook page, she said.

The chickens can easily rototill a new garden bed. The birds scratch and dig and peck out all of the snails and insects, she said.

Barron Park resident Debbie Nielsen built a deluxe coop that matches the color and architecture of her home. Before the coop was built, she found a chicken weathervane with a hen and chicks that is now affixed to the top of the shingled henhouse.

An interior designer, Nielsen's henhouse for six features hand-turned latches, shutters, a window and flowerbox, a nesting area and ceramic dishes on the wall for decoration and glass-board walls for easy cleaning. The house is earthquake-proof and bolted to a cement foundation.

Nielsen leads a busy life, and the henhouse is a place where she can go to slow down, she said. Vignette, Xenia, Gary, Portia, Gabby and Lynette happily devoured romaine lettuce leaves and an apple on Thursday morning.

Nielsen said she checked with her neighbors, and all have been supportive.

"There are a lot of chicken sisters here. Several ladies on the street have chickens," she said.

A sign over the coop proclaims it the "Bird Farm." She used the same name and font as that of the Illinois sausage company started by her grandfather and uncle, Bird Farm Sausage Co., she said. Trevor, her 16-year-old son, helped design the coop.

She admitted that she pulled out all the stops, but she wanted something to look out on that was pleasing from her kitchen window and dining room, where she spends much time studying.

"I'm from the Midwest, and they're like yard art," she said.

What if any rules are there about keeping poultry in our yards? Is there a limit to how many we can have, I think its a great idea.

Hi Naomi:
Palo Alto requires you to have a permit for your coop. You can have up to 6 hens, and no roosters. If your coop will be within 25 feet of any other property lines, then you have to have the written consent of your neighbors whose property is within that 25 foot mark. For more info contact animal control. You have to submit an application and fee, as well as a plan showing where your coop is located on your property and the distance to the neighbors' lots. Then animal control will come and inspect to ensure it meets those criteria and issue the permit.

Hope this helps. Chickens make great pets for kids, make excellent compost materials, and they give us great eggs too. Since getting chickens we have been composting and have a much improved garden as well as having kept nearly 1 ton of waste out of landfill.

Can you stay healthy without making more trash?
By Sherry Listgarten | 6 comments | 3,050 views

Think about helping others in our coronavirus-affected area
By Diana Diamond | 7 comments | 2,787 views

The University of California’s flexible policies during COVID-19
By John Raftrey and Lori McCormick | 5 comments | 1,104 views