﻿ Two degrees can do all that? | A New Shade of Green | Sherry Listgarten | Palo Alto Online |
Include Photos | Include Comments | Print this page | Close Window

Two degrees can do all that?

It’s hard to believe that if the temperature goes up by only two degrees, our world will change so much. When I walk outside, I can barely tell the temperature within five degrees. So how can it possibly be that, as scientists assure us, if the global temperature goes up just two degrees over pre-industrial levels (and we are already almost one degree over), then these things are likely to happen (1):
- Seas will rise by almost two feet by 2100
- Almost 200 million people will be exposed to severe drought, and 200 million more to water scarcity
- More than 15% of plants, insects, and invertebrates will lose over half their climatic range
- Arctic summers will be ice-free 16% of the time
- Rainfall extremes will go up 36%
- More than 99% of coral reefs will die
- Global losses from flood damage will reach nearly $12 trillion

The science is credible. In fact, we are already seeing changes in those directions. So how do I reconcile the science with my intuition that the temperature change is a rounding error, too small to matter? 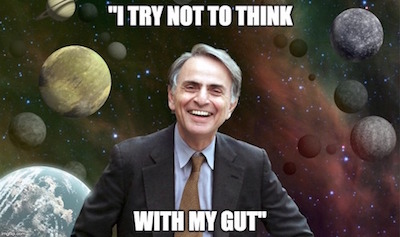 Here are some things that help me to understand the bigger picture.

1. It’s celsius.
Climate work is often done in metric units. The reports typically use Celsius degrees, each of which is 1.8 times a Fahrenheit degree. Those 2 degrees are 3.6 degrees in our system. 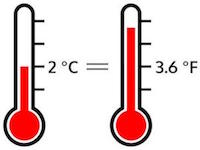 2. Warming is not uniform.
The two degree change refers to the average surface temperature across the globe, including the oceans, which warm more slowly. So when we reach a two-degree average, the average warming across drylands will be 3.2-4.0 °C (around 6-7 °F) -- nearly twice as high, and more intuitively noticeable. (1)

In addition, there is considerable variation on the land, which you can see here. Already in 2018, temperatures were four degrees warmer (Fahrenheit) in much of Alaska, northern Canada, Asia, and the Arctic. 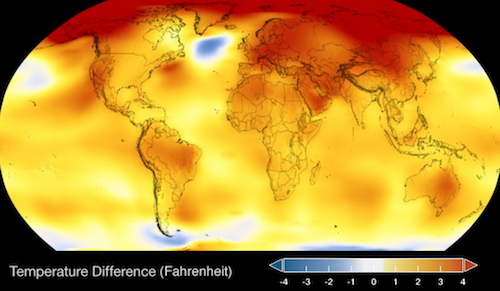 Know anyone who’s taken a summer vacation to Alaska this year? They probably experienced record warm temperatures there. Melting in the northern regions, especially Greenland and the Arctic, has an outsized impact on our climate. Which brings me to…

3. Small changes can have big impacts.
When certain thresholds are met, small changes can have an outsized impact. For example, as the Arctic ice cap melts, it reduces the planet’s reflectivity, the Earth absorbs more radiation, and we warm faster. Similarly, as permafrost thaws, it releases more greenhouse gases, so we warm faster. (2) And when vast ice sheets melt beyond a certain amount, they can cause a dramatic increase in sea level. So a small temperature difference between freezing and melting, for example, can have big impacts on warming, flooding, and availability of fresh water.

4. The climate is sensitive to temperature.
Think about the most recent ice age (aka the “last glacial maximum”), when much of North America was covered in feet of glaciers and wooly mammoths were roaming the planet. How much colder do you think it was then? 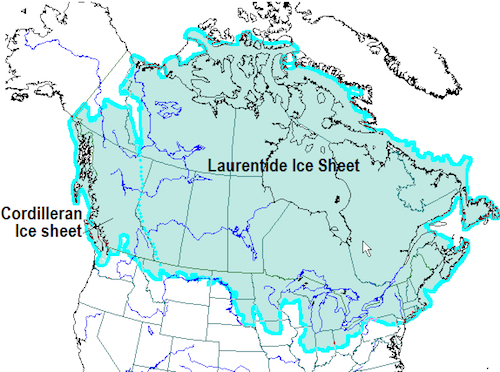 5. We don’t see most of the heat.
This is an amazing thing. If it weren’t for the ocean, our day-to-day would be much, much hotter already. The ocean has absorbed an astonishing 93% of the excess heat that our planet is trapping. Because the ocean is vast and deep, and because water heats up much more slowly than air, our ocean is capable of absorbing large amounts of heat. This heat will come back to us later -- the ocean is like a battery, storing heat that it will release in the future. But for now it is doing us a tremendous service, though fish populations are beginning to be impacted. 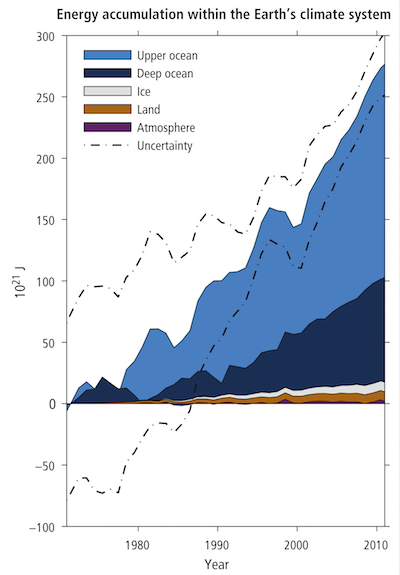 6. Climate change is more than warming.
There are effects from our emissions that are not related to warming. For example, the ocean has absorbed about one quarter of the carbon dioxide that we have emitted. When the carbon dioxide reacts with sea water, it ends up reducing the amount of carbonate that is available for corals and mollusks to build their shells. It’s like the ocean is acquiring a bad case of osteoporosis. (4) 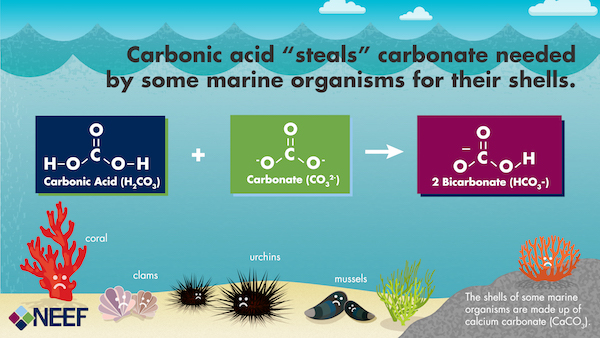 From the EPA page on ocean acidification

These points help me to better understand why the impacts of a few degrees (Celsius) are much bigger than our intuition leads us to think. Yoichi Shiga, a climate researcher at the Carnegie Institute for Science, suggested another way to think about why a few degrees can have such a big impact. When you think of the human body, the normal temperature is 98.6 °F. But a temperature of 105 °F is very dangerous, yet just a few degrees (3.5 °C) warmer than normal. Our ecosystems, like our bodies, are complex and quite sensitive to temperature. Our greenhouse gas emissions are pushing our planet quickly beyond the temperature norms that have been established for the last million years.

1. Carbon Brief has a nice summary of changes at 1.5 C and 2.0 C. The World Resources Institute has one that is more graphical but less complete, and has more emphasis on the difference between the two.

2. Yale Communications has made a short video about the impacts of permafrost thawing.

3. Wikipedia has a good amount of information about the last glacial maximum.

4. The NRDC has a good overview of ocean acidification, including the osteoporosis analogy. The EPA has some good information as well, with nice illustrations.

I hope that your contributions will be an important part of this blog. To keep the discussion productive, please adhere to these guidelines, or your comment may be moderated:
- Avoid disrespectful, disparaging, snide, angry, or ad hominem comments.
- Stay fact-based, and provide references (esp links) as helpful.
- Stay on topic.
- In general, maintain this as a welcoming space for all readers.