﻿ State Legislature on Housing: Getting the Demos out of Democracy & with it, Accountability | A Pragmatist's Take | Douglas Moran | Palo Alto Online |
Include Photos | Include Comments | Print this page | Close Window

State Legislature on Housing: Getting the Demos out of Democracy & with it, Accountability

The State Legislature is in the middle of its annual exercise of stripping political power from the citizenry (Demos in Greek = people) and putting it in the hands of remote bureaucrats and favored private interests. Last year it was SB35; this year it is the proposed SB50 and its siblings.
Apologies: The "e" in "Demos" should have a bar (macron) above it, but this platform supports only a very limited set of characters.

There is already extensive discussion of the details of the proposed bills, including a town hall meeting this Sunday (4-6:30 pm, Lucie Stern).(foot#1)(foot#2) Consequently, I am going to focus here on the politics behind these bills.

The housing crisis is continuing to be used as an excuse for stripping local control over zoning, at the expense of most citizens and to the benefit of developers and large property owners. Why shouldn't we believe the proponents of these bills that their intention is to increase affordable housing, and that their proposals will do just that? Because decades of expert economic analysis and real-world experience have shown that the advocated "solutions" lead to less affordable housing. Chicago implemented measures very similar to the ones proposed for California. A doctoral candidate in Urban Studies and Planning at MIT and former Project Manager in Chicago's Planning Council recently published a research paper on the current results. Unfortunately, that paper is behind a paywall. However, it has been discussed in the open literature. The most interesting was an article by Richard Florida who is (in)famous for arguing that economic health of cities required them to become substantially more dense to attract the "Creative Class". He has since acknowledged he was mistaken in this. Of this study, he wrote "A new study of zoning changes in Chicago finds that they led to higher, not lower, local home prices, while having no discernible impact on local housing supply."(foot#3)(foot#4)

The supporters of this legislation argue that increasing the supply of housing units will decrease the price. For decades, they have assiduously ignored that it is the limited supply of land that has been the determining factor: Changing the zoning to allow larger buildings makes the land more valuable. That, with the higher construction costs for taller buildings, has more effect on pricing than small increase in housing units.(foot#5)
"It is difficult to get a man to understand something when his salary depends on his not understanding it." - Upton Sinclair.
And for the experts and theoreticians shilling for this:
"There are some ideas so absurd that only an intellectual could believe them." - George Orwell.

Then there are the state and regional policies that are facilitating demand increasing faster than supply. The state government has a long-established philosophy of encouraging developers to provide relatively small amounts of housing by giving them building "bonuses" that allow them to add space for far, far more new jobs. Mayor Filseth mentioned one such example in his State of the City speech: SB35--the precursor to SB50--allowed the redevelopment of Cupertino's Vallco Mall

After his 1831 extended visit to the US, ^Alexis de Tocqueville^ famously praised the grassroots involvement in government and civic affairs, and attributed the strength of democracy in the US to its bottom-up nature in contrast to its fragility in France, where it was predominantly top-down and centralized. It's hard to get people to support a process and its decisions when they have little input, little understanding of why a particular decision was adopted and consequently little faith in the correctness of that decision.

Increased centralization requires a larger bureaucracy and larger set of rules to be administered. But those rules cannot keep up with the increasing complexity of reality, and the remoteness of the bureaucracy results in them having neither the knowledge nor flexibility to deal with the exceptions and difficult cases. But never mind -- one of the big advantages of such arrangements is to eliminate accountability. "When everyone is responsible, no one is responsible."

The more complex the rules, the easier it is for your elected representative to distance himself from responsibility. And he can excuse his vote for the enabling legislation by claiming that it had more good than bad.

An example of rules-are-rules from ^Wheatland^ in Yuba County. It is a built-out city -- as is Palo Alto -- with a population of 3700. The state says that they need to provide 343 new affordable housing units, which would require roughly 17 acres. The city's current median house value is $307K. Is there a need for these housing units? Would a developer be interesting in building them? Where would the construction workers come from -- there is a shortage that is already impeding rebuilding homes destroy by the recent wildfires.(foot#6)
Answer: Unknown and probably irrelevant.

I participated in one (two?) Citizens Advisory Committees for previous revisions of Palo Alto's Housing Element. There were no good choices for where to rezone for the amount of housing that the state (via ABAG) was requiring (search term: RHNA = Regional Housing Need Allocation). There were bad choices and worse choices. I came to view my role as differentiating the two by raising questions and concerns. It was too depressing, and I didn't apply for subsequent iterations.

Over the years, Palo Alto has been whipped around by the fickleness of the regional bureaucrats (ABAG/MTC). Because of Palo Alto's three Caltrain stations (The Crossings station in Mountain View is counted as being in Palo Alto):
- Palo Alto should be a job center for commuters from elsewhere, and rezone to allow more office space near the stations (Cal Ave is a "Priority Development Area").
- No wait. Palo Alto should have high-density housing for commuters to other cities.
- No wait. Palo Alto should have high density housing within walking distance of people work (disregard how such a pairing would be accomplished).
Also ignore Caltrain capacity issues: It is effectively operating at full capacity, and the projected additional capacity from electrification will not meet the needs of current and near-term developments. (Aside: BART has a similar problem). For the bureaucrats assigning housing quotas, transportation and other infrastructure is someone else's department, none of their concern.

There has been extensive research into what makes for "livable" cities and attractive cities. And research about how these attributes affect human health and sense of community. SB50 would encourage development contrary to this research.(foot#7)

I routinely hear the argument for unbridled building of more housing -- with the concomitant building of even more office space -- as "We need to build housing for everyone who wants to live here, and at a price they can afford.", but they reject that this involves various subsidies from those already living here, without being able to explain how that might happen.

SB50 calls focusing the requirements for new housing on cities that have good school. Of course, this is without regard to whether those school districts could handle the influx of that many new students. Not their department ...

There is a classic cartoon illustrating the difference between the terms "Equality" and "Equity": 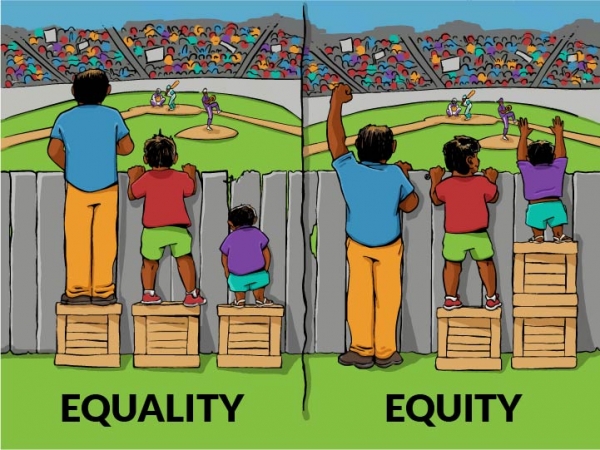 But the too common reality of what transpires has produced an alternative cartoon (attribution unknown to me):

Note: The fact that the three people looking over the ballpark fence hadn't purchased tickets apparently escaped the original cartoonist. Or possibly, he saw it as another illustration of "equity".

4. Richard Florida and the Creative Class:
His (former) theory has had a large influence on Urban Design for two decades.
My blog: "^The 'Creative Class' and 'superstar' cities^", 2017-07-08.

6. "^California puts Wheatland on notice for lack of affordable housing^", The Sacramento Bee.(^archived copy, if needed^).


----
An ^abbreviated index by topic and chronologically^ is available.


----Boilerplate on Commenting----
The ^Guidelines^ for comments on this blog are different from those on Town Square Forums. I am attempting to foster more civility and substantive comments by deleting violations of the guidelines.

I am particularly strict about misrepresenting what others have said (me or other commenters). If I judge your comment as likely to provoke a response of "That is not what was said", do not be surprised to have it deleted. My primary goal is to avoid unnecessary and undesirable back-and-forth, but such misrepresentations also indicate that the author is unwilling/unable to participate in a meaningful, respectful conversation on the topic.
A slur is not an argument. Neither are other forms of vilification of other participants.

If you behave like a ^Troll^, do not waste your time protesting when you get treated like one.