Q: What is the biggest piece of environmental and public health legislation before Congress this year?

A: The Farm Bill, released last month to the public.

We’re reading Dan Imhoff’s Food Fight, - The Citizen’s Guide to the Next Food and Farm Bill, reviewing the book and discussing the new 641-page bill as it travels the long road through Congress. Please join us. It’s time to learn more about this massive bill.

The first Farm Bill was written during the Great Depression and has since renewed every 5 – 7 years. The current bill was past in 2014 and expires September 30, 2018. The newly proposed draft by the House Majority released a Republican-only version of the farm bill that did not include Minority (Democratic) language. Historically, both parties of the Agriculture Committee have worked together to agree on the farm bill draft before it is released to Committee members.

1. Food stamp and nutrition programs, such as the Schools Lunch Program (72 percent of gross outlays)

2. Income and price supports / subsidies for commodity crops (about 22 percent)

It’s been a goal of mine to learn more about the Farm Bill, and the book is actually an enjoyable, easy read. Get a copy online for $5, read along with us, and offer your thoughts for discussion and change. We’ll be talking about it for the next few months. At the end of the read, the goal is to meet with our representatives and lobby for a better bill. Or if you prefer, just toast with some good wine, and cheer your motivation to learn about one of the most important bills in Congress that few of us know anything about.

Realizing that some of you probably did not do the first reading assignment of chapters 1-3… here’s the cliff notes:

Chapter 1: We Reap What We Sow

1. Farm Bill crop subsidies make junk food some of the cheapest calories in an America supermarket.

3. The amount of government intervention in large scale agricultural makes talk of “free markets” rhetorical. Conventional farmers stay afloat by farming the system, rather than growing what might best serve the land, or the community.

4. Farm Bill “direct payments” / subsidies send our tax dollars to large landowners based on historical harvest records of a property, regardless of whether the land is still being farmed or the owner has suffered income or yield loss.

6. Farm worker migration is one result when government subsidizes an overproduction of crops such as corn, and dumps it on another country. Since NAFTA in 1994, an estimated 1.3 – 2.3 million Mexican farmers have been forced to leave their lands and move elsewhere for work, because they can't compete with the artificially low prices created by the Farm Bill. (But we can’t stop whining about how China screws the U.S. with steel).

Chapter 2: Why the Farm Bill Matters

1. U.S. eaters think our food is cheap, but as a result of the Farm Bill, we pay for it at least four times: 1) at the checkout 2) in taxes to subsidize commodity crops, 3) in environmental cleanup from improper agriculture 4) in medical costs resulting from poor diets.

Researcher Charles Benbrook says if food is assessed by the cost per calorie produced, rather than as a percentage of disposable income, more than 20 countries enjoy cheaper food systems than the U. S.

2. The Farm Bill matters because it makes some mega-farms rich as it drives family farms out of business. It makes unhealthy ingredients cheap and abundant, and legalizes and supports polluting and destructive monoculture farming practices. It artificially sets prices benefiting business, not eaters.

Chapter 3: What is the Farm Bill? 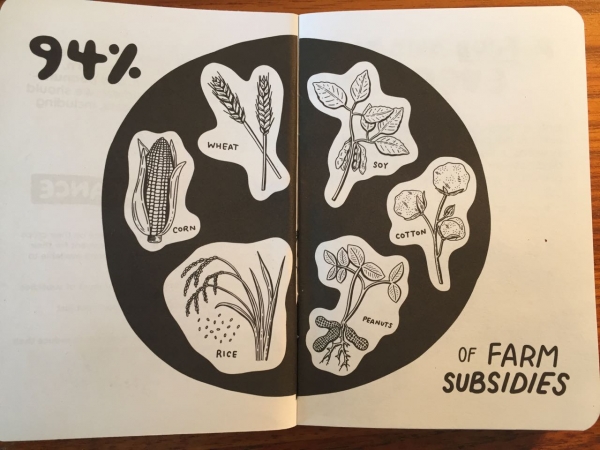 - from The Fight For Food, Congressman Earl Blumenaueur 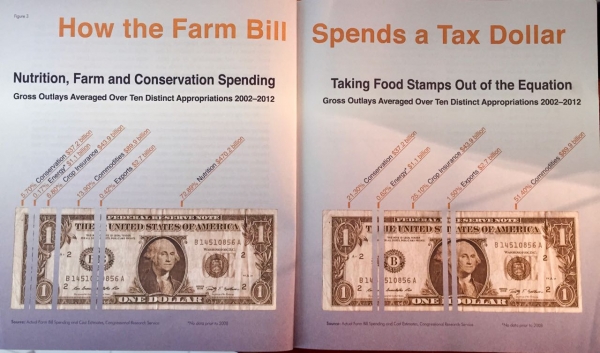 Learn more and get involved:

1. Read Food Fight - The Citizen’s Guide to the Next Food and Farm Bill

2. Read The Fight For Food (small pamphlet about The Farm Bill written by congressman Earl Blumenaueur

5. Read Maine Congressman’s Chellie Pingree’s review of the bill. “The Senate has pledged to work on a bipartisan bill that will be seemingly less controversial than what has come out of the House.”

6. Identify congress people who support the current House bill and ask them why.

7. List who in Congress get the most $$$upport from Big Ag / the commodity and agriculture industry.

9. Sign up to receive this blog weekly and participate in our book café and potluck discussion.


NEXT READING ASSIGNMENT: Chapters 4 - 6. We'll discuss in a few weeks.