From the moment I boarded the flight to Dulles I knew this would be an extraordinary weekend. The United flight departing SFO Friday morning was almost entirely filled with women heading to the Women’s March in Washington. Pink hats were the headgear of choice.

My usual travel routine of podcasts and catching up on a stack of magazines was abandoned in favor of chatting with my seatmates. What most of us had in common was that we had never been to a march before, so we traded details of the event and tips for marching that we had read on the internet. A woman across the aisle furiously crocheted pink bracelets for anyone requesting one. The camaraderie we shared reminded me of the bus to summer camp. Upon landing, the pilot welcomed everyone to DC, especially the marchers, and told us to “stay strong”. When my daughter met our plane, I was introducing her to my new friends!

Despite all the advice, I was completely unprepared for the experience of attending a gathering of so many hundreds of thousands of people. The first surprise was early Saturday morning when our group arrived at the Metro station in Bethesda, Maryland to catch the red line to the Capitol. Since Bethesda is not a community known for it’s activism, we were surprised to see a line for the subway that wrapped around the corner and stretched out for three long blocks, but the mood was jubilant and energetic and after about an hour we squeezed onto a train already crowded with marchers. The train passed over our intended stop because the platform was too full for us to disembark.

Walking to the mall from Union Station we were in a sea of marchers waving home-made signs and chanting slogans. At the already-crowded mall it was impossible to get anywhere near the stage or even hear the speakers. There was one over-sized screen barely visible in the distance. The turn-out clearly way exceeded anyone’s expectations. Lines for porta-potties were 50 people deep.

Folks were polite and considerate, but it was loud, confusing and chaotic, and after a while our group needed a bathroom and a break from standing, and since I am the tallest and could almost see over the crowd I had the task of leading us as we threaded our way slowly through the crowd and off the mall.

We retired to a nearby Starbucks and recuperated and re-caffeinated while receiving inspiring texts and pictures from friends and family at marches around the nation and the world. We then received word that our march was “cancelled” due to the fact that the entire route was packed with people.

Most of our group headed home, but my daughter and I wanted to see the monuments so we set off and met up unexpectedly with an offshoot of the march that had overflowed onto adjacent streets. We were amazed so many hours into the event to see thousands of folks still marching with determination for their cause. We joined in and then veered off to see the Washington Monument, World War II Memorial, Vietnam Memorial and Lincoln Memorial. At a time when our democratic institutions are being tested, we found reassurance in these awe-inspiring structures that honor so many who served and sacrificed.

We also stopped in at a church near the White House that was providing snacks, water, coffee and bathrooms for marchers. A church member assured us they planned to open their doors for the coming months to support activists.

Home again, I am reluctant to wash the mall mud off my boots or remove my pink bracelet. I want those visual reminders to march on. 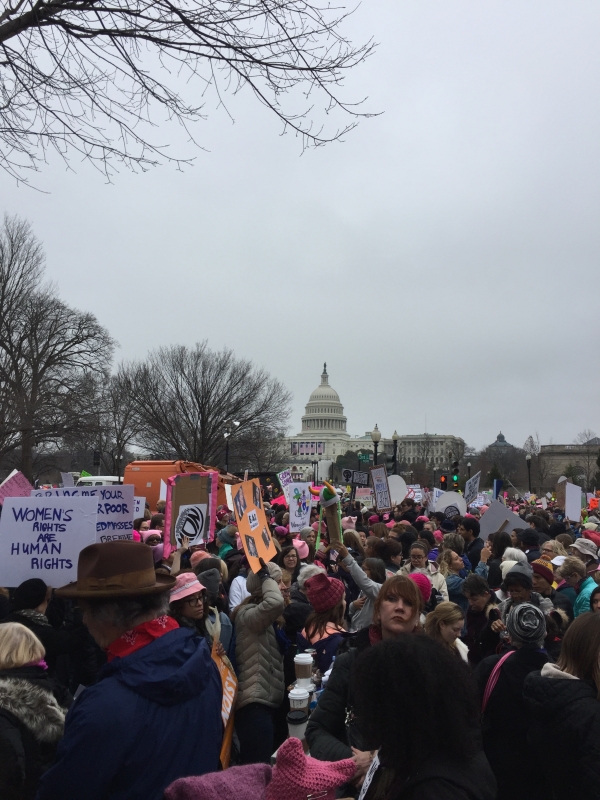