New traditions in an ancient land

Christmas is an important religious celebration in the Middle East. After all, Christianity originated there! In Beirut, nativity scenes are ubiquitous. Every public square and many businesses, including the corner gas station, display the holy family, the animals, the shepherds, the kings and the angels artfully arranged in a rocky grotto. Initially I found this depiction confusing, but it was explained to me that historically livestock were sheltered in caves, so if Jesus was born in the region it was more likely in a cave than in a barn.

This year we were surprised and delighted to see how the holiday celebrations in Beirut expanded from past years to include German traditions, like the Christmas market and brightly lit and decorated fir trees, the American version of jolly Santa Claus, and arrays of red poinsettias on balconies. Rows of garland-draped alpine huts sold foods and crafts with a distinctly Arab influence. Honey, jams, apple cider, pistachio, roasted chestnuts, zaatar-laden flat bread, and rose water-infused desserts were available as well as artisanal goods like hand-painted leather and wood decorative items, candles, hand-worked metal dishes and jewelry, soaps, and intricately embroidered cloth.

Children painted pottery or were photographed with Santa, who did not disappear back to the North Pole on Dec. 26th, but stayed to spread holiday cheer through the New Year. We were heartened to see families of multiple faiths gathered together and enjoying the festivities throughout the holiday season. 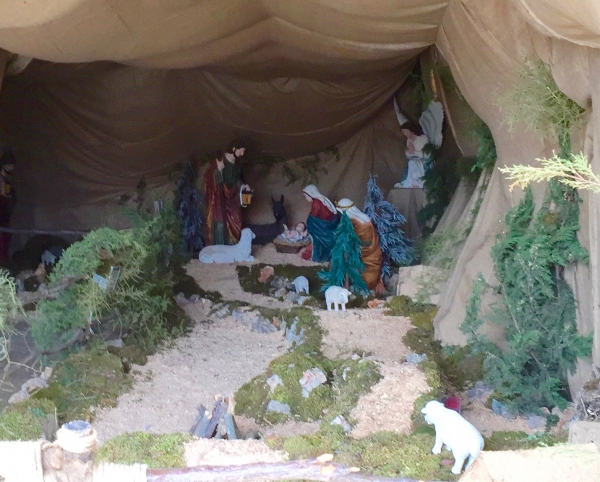