Always a good reminder, especially with our little transition going on. Hey, I’ll give anyone a shot, but do got a bad taste in my mouth about new food policy and the Feds.

When someone challenges you, you fight back, be brutal, be tough.

Hats off to the Obama administration for noble attempts in support of local family farms and regenerative food systems. Some met success - others not so much. Let’s review to consider what we’ve tried, and where we might be headed.

SUCCESS – NOT SO MUCH

The Obama Foodorama first came to town with that innocent White House organic garden which got high praise from Small Food supporters who felt they had died and gone to heaven. I know I did. But Big Food quickly stomped in and accused the effort of “blaming farmers for obesity and pollution,” and “giving conventional agriculture a bad name.” Then there was quite a strong push by the administration to give small producers & farmers a seat at the bargaining table with Big Beef, Big Chicken and all the good old boys. They wanted to hear how small food producers described their working agreements and contracts. It was a solid attempt to level the playing field, and the administration even put an antitrust measure into the 2008 Farm Bill, but hah! Big Farm came after them so hard, and the House Appropriations Committee defunded enforcement. And when E.P.A. tried to just count the nation’s CAFOs (Concentrated Animal Feeding Operations), that too was dropped like a dead carcass.

When I was in Fullerton, CA for Grow Local OC - the future of urban food systems, a couple weeks ago, I asked Karen Ross, Secretary of California’s Department of Food and Agriculture, what Small Food successes remained from the O Administration. She likes Know your Farmer, Know your Food, a strong, USDA program offering grants, loans, and resources to help local and regional farmers, ranchers and food businesses find new opportunities. I'll add the first substantial changes to the National School Lunch Program in over 30 years, the work on food safety inspection laws, improvements to nutrition fact labels, and Michelle Obama’s Chef’s Move to Schools program, which I have been honored to work on. It remains inspiring to see how good food, gardening, and cooking really resonates with, and excites our young.

So we can’t just sit around and complain for the next four years – Think Big! The hottest places in hell are reserved for those who, in times of great moral crisis, maintain their neutrality. (Dante, 1265 - 1321) I’m taking a cue from Whoddn’twin and doubling down. Great people of these United States, today I officially throw my name in the hat for your Secretary of Plate, and commit to watchdogging Washington food policies and regulations closer than ever, especially the progress of the 2018 Farm Bill. (Note of caution: the last time Republicans controlled the House, Senate, and White House during a farm bill year was 1954).

Who will join me?

Consciousness of the American eater is at an all time high. We are too smart and too connected to be proven powerless against returning attacks on the family farm, the National Schools Lunch Program, and the growing understanding that climate change negatively effects agriculture.

One of the most positive effects we can have on the environment, and I’ll throw in society at large, begins on our dinner plate. Food brings us together: with it we can transcend the urban / rural divide. Education and balance are key to that message however –if it ain’t fun, it don’t get done. So our platform is to have a good time while attracting eaters from all walks of life toward a tasty food revolution we want to be a part of. Let’s make America healthy again!

We are guaranteed to have an effect because food is power. In fact, food is more powerful and can have an even larger effect that politics can. It’s unfortunate that many of us don’t like politics (government actually, politics sucks)…but all of us like food. Not everyone votes, but everyone eats.

So let’s gather tonight in the kitchen and cook…shall we?

Together we can make a great meal – and a great difference. 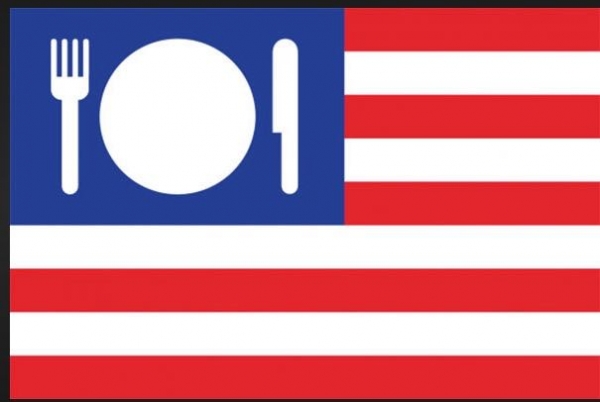 - graphic from the web

1) The National Association of Sustainable Agriculture

2) Center for Science in the Public Interest