There has long been widespread public dissatisfaction with what has been chosen as public art and the process behind those choices. This is good time to visit City Hall's public art policies because Council recently expanded the "Percent for Art" program (requirements)(foot#1) and Public Art Commission has three of its seven seats coming up for (re)appointment, with one currently vacant (application deadline March 3).(foot#2)

In assessing Palo Alto's public art program, recognize that it needs to represent the wide range of tastes in the community: Don't fall into the trap of judging it based on a single piece or a small group of pieces. Instead ask yourself a question such as which pieces you like, dislike and are ambivalent about. It can also be very revealing to ask this of people you know. There is a hidden component in that suggested question because it also reveals how many pieces the person has noticed and remembered. You can browse the City's Collection to see how many you got and missed (to narrow down to most of the pieces you would likely encounter while out-and-about around town, use Search By? on the Discipline of Mural and Sculpture).

If you have listened carefully to past debates, you will quickly detect the disconnect between the general public and the decision-makers. The former sees the goal of public art as enhancing the aesthetics of the community, whereas the latter routinely talks of "the collection" in the sense of a catalog. They talk of the importance of "collecting" certain artists and of having "destination pieces" (art that they believe that people will travel some distance to see). This philosophy of the purpose of public art is not uncommon, and occasionally causes embarrassment for the government. (foot#3)

Regarding a public art collection as a catalog creates additional problems. For example, you start with the artwork and then try to find a location to display it. You can make very different acquisition decisions if you start with the location and decide what would improve its aesthetics. For example, consider the sculpture at the driveway entrance to the Junior Museum and Zoo (which I didn't see listed as part of the public art collection). This enhances its location and is the sort of artwork that you would want there. But it would be silly in a wide range of other locations. On the other hand, one of my favorite artworks is the Sunflowers (Street View) in front of Country Sun Natural Foods at 440 California Avenue. Most people I know are unaware of these sculptures because they are so poorly sited: They need to be located where the public will be viewing them from above (the new Mitchell Park Library comes to mind).(foot#4)

One of the recurring problems with "Percent for Art" programs is not the intent, but the psychology that it creates: The funds can too easily be viewed as found/free money and be diverted to large purchases that would not have otherwise been made. Palo Alto saw this in connection with the Mitchell Park Library: The entire "Percent for Art" budget was spent on a single sculpture by an artist that the Public Art Commission had long been trying to collect (Beasley sculpture approved for Mitchell library: Council allocates $270,000 for new 'destination piece' for renovated library, PA Weekly 2009-10-27). When I and others raised the question "What about funding for art for the library and community center?" we were told that money was being transferred from other sections of the budget for that (which it was). But the obvious follow-up question of who was loser in this transfer got no answer. This, of course, was an improper/impolite question: The very reason for doing these sort of transfers is to obscure who is getting shortchanged.
Aside: When I ask people what they think of the new Mitchell Park Library, none has mentioned that sculpture. Even when prompted, they don't remember it. What they do remember (and largely like) are the Athenian Owl bollards "Whimsy and Wise".
More info on the Mitchell Park art can be founding by scrolling down on the City's homepage for Public Art, and in a Press Release: Art at the Mitchell Park Library and Community Center (2009-11-10).
Addendum: Google StreetViews of the Beasley sculpture (construction fencing still present in the photos, but good-enough): On Middlefield Road, going southeast, northwest and NW, but closer.

Recognize that the descriptions of public art acquisitions often obscure the criteria used to decide on it: Was it to collect that particular artist, have an example of that discipline, or a belief that that specific artwork was a good match to the location? One example for you to think about is currently highlighted further down on the City's homepage for Public Art: "Questions About Your City" by Anthony Discenza (copy of texts and map of locations of the signs with these questions). Although I have ruled out discussions of matters of taste (both this category of art and the questions themselves), there is the matter of siting: Is the intended audience for these signs likely to be passing by them? Are they likely to see these signs? Are they likely to stop read and ponder the questions? Are they likely to actually do anything as a result of having read these signs?
For me, this artwork failed for each of these questions: Likely many people from my end of town (southern Palo Alto), I rarely go to where the signs are displayed (University Avenue downtown). When I did, I didn't see the signs despite thinking I knew where to look (defeated by visual clutter?). And I wouldn't have had time to peruse them, nor follow-up.

In contrast, consider the Art of Greg Brown, a group of medium-sized Trompe d'Oeil (Fool the eye) murals scattered around much the same area. They are spotted, and enjoyed, by many passersby.(foot#5)

Palo Alto has a serious problem with its public art selections. Residents talk of it as being silly (in the wrong way), mundane, bland, unimaginative, and being badly sited (no artistic sense in how a piece of visual art is displayed). Residents complain that Palo Alto does much worse than other cities in the region ("Why can't we have something like ?"). And what they experience (and photograph) on business trips and vacation.

In writing this, I (re)read a number of descriptions of our public art. It was amusing (depressing?) that various of the descriptions displayed more creativity and imagination than the artwork itself (echoes of the Pet Rock fad of 1975). In particular, many descriptions talked of conveying motion, which was render even more absurd when those works are compared to this photo I had recently received of a sculpture in Singapore. 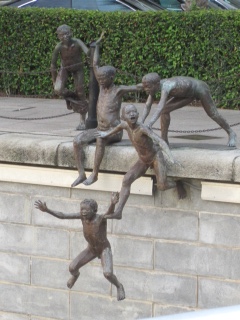 What can be done
If there is going to be a change of the philosophy about public art in Palo Alto, there needs to be a visible public sense that such a change should occur. It is not enough that people express to Council such a desire, because there need to be eligible and qualified candidates for the Public Art Commission who are interesting and willing to push such a change. And someone who knows much more than I do needs to advise Council members on how to distinguish the various approaches during their interviews of the candidates.

Reminder: Not for griping
Reminder that comments here are not for griping/shilling about individual pieces in the collection. My desire is to have commenters focus on what should be done to have an acquisitions policy more compatible with what residents want.

---- Footnotes ----
1. "Percent for Art" is a common requirement that 1% of the construction budget of various categories of projects be reserved/dedicated/? for art to enhance the aesthetics of that project. In January, Council expanded the existing program to cover more capital projects. This was considered by the Council's Policy and Services Committee in December (Palo Alto prepares to broaden public art requirements: Revised policy would make 'percent-for-art' policy applicable to more municipal projects) and approved on January 12 as Item 11 on the Consent Calendar (Staff Report: Municipal Public Art Ordinance) with the second (confirming) voting on February 2. Note: The "Consent Calendar" contains the items deemed ready for approval without further debate by Council. The debate/consideration on many of these items is deemed to have been completed at earlier meetings and/or at lower levels in City Hall (Staff and Commissions and Boards).

3. San Jose is my favorite example of a city being embarrassed by its decision that it was important to "collect" an artist without regard to the particular artwork. In 1994, San Jose commissioned a sculpture for the Plaza de Cesar Chavez. They chose (the late) Robert Graham who was famous for his monumental bronzes (Online Gallery). He proposed creating a soaring bronze sculpture of Quetzalcoatl, the feathered/plumed serpent deity (Aztec and earlier cultures in the Mexico City region). The sculpture would be open?you would be able to walk through it?and sunlight would play off the bronze. However, after he got the $500,000 commission, the artist declared that his proposed sculpture was impractical/too expensive, and the City of San Jose agreed to let him change this to a squat coiled snake of cast stone (a formulation of concrete that simulates stone). Picture and more pictures. The sculpture quickly acquired names such as "Dinosaur poop" (San Jose sculpture described as waste, 1995-04-14, SFGate). Many attributed this fiasco to a contractor using a change order to rip off a naïve, trusting, over-awed client. I like to think of it as a different piece of art than what the client expected: The artist realized that the politics of the situation would let him get away with "doing shit", so that became his artistic statement.
Apologies to the 1971 movie (and earlier play) "Little Murders" (IMDb).

4. Sunflowers: Siting problem details: They are easily missed when encountered where virtual everyone passes by them. They are stunning when seen from above when they are catching the sun, but the only time I have had that opportunity was during meetings in private offices in two of the taller buildings nearby. Even when the top of the Sunflowers are catching the sun, the undersides of the petals are shaded and consequently they register as furled, faded umbrellas (driven by context cues). The StreetView illustrates this: The picture is taken far enough above head level that you start to see the brilliance of the tops of the petals, but still mostly see the drab undersides. When I take visitors to lunch on California Avenue, I routinely ask them to tell me what they think of the various artworks without pointing out any?no one has yet spotted the Sunflowers.

5. Most people tend to underestimate the range of possibilities for murals. There are murals on the side of buildings (such as the one on Country Sun). There are murals on utility boxes (several examples in the City's Collection). There are ones for corridors and hallways. The Kansas City Public Library recently made a big splash with a parking structure as a bookshelf: Although there is an official site, you get far better pictures from a web search on "kansas city library book wall".

----
The Guidelines for comments on this blog are different from those on Town Square Forums. I am attempting to foster more civility and substantive comments by deleting violations of the guidelines.

I am particular strict about misrepresenting what others have said (me or other commenters). If I judge your comment as likely to provoke a response of "That is not what was said", don't be surprised to have it deleted. My primary goal is to avoid unnecessary and undesirable back-and-forth, but such misrepresentations also indicate that the author is unwilling/unable to participate in a meaningful, respectful conversation on the topic.

An abbreviated index by topic and chronologically is available.