﻿ It's the End of the World as We Know It: "Snowpiercer" | Off Hours | Anita Felicelli | Palo Alto Online |
Include Photos | Include Comments | Print this page | Close Window

It's the End of the World as We Know It: "Snowpiercer" 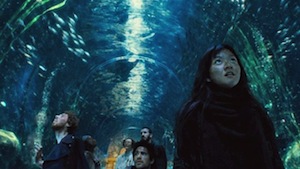 Back in the day, direct to video meant a movie was bad, but some excellent movies have been released for streaming VOD while still in the theaters over the past few years. Snowpiercer is one such film. While I don't agree that it is likely to be the absolute best movie of the year, as some critics have claimed, in many places it is breathtaking and it is certainly one of the best and most interesting action movies I've ever seen. Marked by the absurdity and weirdness that characterized Terry Gilliam's Brazil, Snowpiercer was directed by South Korean director Bong Joon Ho (The Host) and based on the French graphic novelLe Transperceneige by Jean-Marc Rochette.

In the film, the world as we know it has ended (right around now) due to a failed effort by humans to reverse global warming, which results in an Ice Age. In 2031, the last surviving humans are riding a long, long bullet train that circles the snowy and icy world once a year. In First Class at the front of the train, the 1% live luxurious lives while the poor proletariat lives in dark cars in the tail section, living on "protein blocks" that look like black Jello bricks and getting abused by armed guards. Their children are taken and seemingly, so are their limbs sometimes.

There have been past efforts made to unseat the privileged, but these efforts were unsuccessful. It's time for another effort at revolution. Leading the poor is Curtis (Chris Evans), who helps them fight car-by-car towards the sacred engine to get control of the train. Helping him is Edgar (Jamie Bell), Tanya, a mother (Octavia Spencer) trying to find her son who has been taken, and Namgoong Minsoo, a security expert and drug addict (Kang-ho Song). Curtis' mentor Gilliam is played by John Hurt. Meanwhile, Tilda Swinton does a wonderful job, as usual, in the role of the bureaucrat Mason who gives speeches on the social order in a Scottish accent. "Be the shoe," she instructs the poor, trying to keep them in their "preordained" position.

The train was designed by Wilford (Ed Harris), built up as an Oz-like figure who appears only towards the end of the movie. He explains, "The train is the world and we are the humanity." Each car features a strange spectacle?an aquarium, a disco, a sushi bar, a fascist kindergarten? that keeps the film from feeling unduly claustrophobic.

Although the plot twists and turns, the allegorical aspects of the film are not quite as surprising as some critics had led me to believe they would be, but in an era where action movies are mostly bubblegum violence and mindless experiences this one is the rare gem that is thought provoking. For those who would rather not stream this and want to see it in theaters?worthwhile because the visual style is one of the best things about the film?it is currently playing at AMC Mercado 20 in Santa Clara.