One of my New Year's resolutions this year was to eat out less and cook more. But when I got an email from Mountain View's treasured restaurant expert Max Hauser raving about a wonderful new tapas restaurant called Cijjo (pronounced "Sy - Jo"), I decided my resolution was made to be broken. I've been a huge fan of tapas ever since I took a trip to Spain in 2001 with two girlfriends and I love the trend of small plates dining establishments on Castro Street. Cijjo is far and away the best of these tapas restaurants, and certainly the one that most captures the magic of Barcelona and other travels abroad.

Located at 246 Castro Street, Cijjo is the brainchild of four partners. They are working professionals in Silicon Valley who are motivated by a passion for travel and culinary adventure. They hope to become a destination restaurant and it looks like they are well on their way.

Two of the partners, Trisha Pham and her husband, have been working on the concept and menu ideas for two years, cooking and testing at home and trying to recreate the dishes they've tried abroad before working with the chefs to make the dishes as sophisticated as they are at present. So far, Cijjo's diverse menu truly has something for everyone, invoking the cuisine of Barcelona, Paris, Shanghai, Sao Paolo, Morocco, Peru and more.

At most restaurants, attempting to do this much fails; inevitably, the chefs are much better at certain kinds of cuisines than others. However, Cijjo's kitchen is brilliant. Helmed by Executive Chef Ira Siegel and Chef TB Lewis, the kitchen's attention to interesting details is exceptional. This is a somewhat expensive dining experience, but the reason for the expense is quickly made clear: every aspect of the menu, including the tuile cones and the fried leek shavings, are made in the kitchen.

Pham and her husband have adopted a tech entrepreneur's approach in creating and executing the Cijjo menu. For example, they are considering having a separate section of the menu be titled "beta" versus the well-tested choices of the main menu. They try to incorporate well-intentioned customer feedback when possible and are attentive to dining out as both a culinary and a social experience - the servers are friendly and good at anticipating customer needs. The interior feels like it's taken a cue from Apple's designers, featuring a lot of white by day and very modern furniture. The effect that Pham and the others are trying to achieve is "cosmopolitan." I think it is quite successful in that regard, though the accents of the palette are a little cool (blues, purples) for my tastes.

Cijjo's hard opening is not until February 21, so Pham and the others are still experimenting, moving items around the menu, changing certain elements of presentation (including utensils) and working on some new recipes. They also plan to remodel the front of the restaurant, which at present does not signal how sophisticated the menu is. Noise levels were fine while I was there, but I anticipate it will get louder as people realize how good the food is. I ate there on three occasions and each time I was pleased by the service.

To start off a meal, the Kumamoto oyster shooters ($4 each) are exquisite. The liquid part is composed of sparkling sake, yuzu sauce, and quail egg. Another good opening to a meal are the flash roasted shishito peppers ($9) sprinkled with flakes of high-quality smoked sea salt and accompanied by a mild red pepper coulis. The peppers pair beautifully with the "thyme snow ale" ($8), a cocktail invented at Cijjo and made of Ireland White Ale, thyme, muddled cucumber, and lime juice.

A clear crowd-pleaser is the Alsatian tarte flambe ($12). Topped with finely diced Applewood smoked bacon, caramelized onions and a decadent fromage blanc cheese sauce, the flour-and-water crust is a little crunchier than puff pastry. Pham's husband told me that kids love this dish. Cijjo is kid and family-friendly ? a big plus for me because I usually feel awkward bringing my toddler to local restaurants. 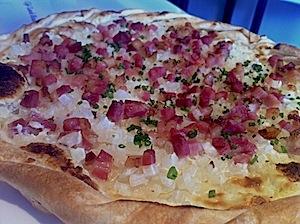 Currently offered only on the lunch menu, the Columbian pulled pork arepas ($10) is another stand out. The pulled pork is marinated overnight in a coffee and spice rub and then cooked slowly. It is heaped on tender corn cakes and topped with pickled onions that give the dish a sharp zesty quality.

One of the most popular items on the menu is the Spicy ahi tuna cone ($11). My friend and I loved these. The trio of tuile cones are made of Japanese red miso, baked in-house and rolled immediately. The cones are filled with tuna, wasabi, and daikon sprouts.

Another seafood standout is the Shrimp Bruschetta Romano ($11). I expected more bread, based on its name, but what I got was much better. Plump shrimp is poached in prosecco and butter and served over a flavorful tomato "vinaigrette," which is actually made of tomato and olive oil, but no vinegar. 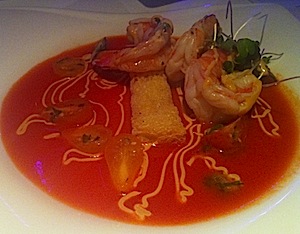 One of my favorite dishes was the gorgeously presented and unusual South American Passion Fruit Ceviche ($12). Unlike most restaurants, Cijjo brings in fresh seafood every day and takes care not to use yesterday's fish. 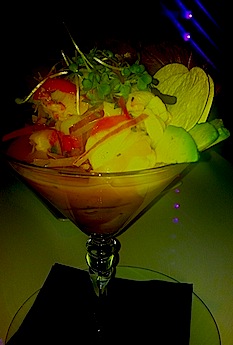 Compared to some of the more creative dishes, the Sao Paolo Hanger Steak ($14) may seem more straightforward, seasoned with smoked paprika and sherry vinegar and served with a Chimichurri sauce. But it is divine.

In contrast to Spanish tapas bars, you do not need to be a meat-eater to enjoy Cijjo, though the menu is currently slanted towards adventurous palates (those inclined towards roasted bone marrow, for example). I investigated vegetarian options because my husband is vegetarian.

The Vegetarian Tower ($12) is a lovely, small stack of meaty portobello mushrooms, a red pepper confit, eggplant, squash and zucchini. It is served with a miso-flavored corn and mushroom salsa strong in umami. It's topped with lightly fried leek shavings. There is also a delectable Humboldt Fog goat cheese sandwich with quince paste and honeycomb ($9), and a wide variety of salads.

To my surprise, the chefs can make the Alsatian Tarte Flambee vegetarian upon customer request by using mushrooms instead of bacon. I'm advised this is not quite as heavenly as the bacon version, but I'm very impressed at the chef and the owner's willingness to spontaneously accommodate dietary preferences at this caliber of restaurant.

The dessert menu is not quite as unique as the tapas menu. They are solid choices with unusual flourishes. For example, I tried a Chocolate-Cointreau Mousse Torte with a subtle, elegant crust. Chef Ira Siegel advised that the crust is made of ground pistachios and black currants. Another that was quite good was the Bahamian bread pudding, includes currants, coconut milk and caramel rum sauce.

My favorite, the Louisiana Style Beignets, are relatively plain, a set of three beignets served with chocolate, caramel and fruit sauces, but my friend and I both loved them. They were pretty close to the kinds you can get at Cafe Du Monde in New Orleans, but without quite as dizzying a cloud of powdered sugar.

The wine and beer list was created with the help of a sommelier and it has unusual entries, forgoing the standard California wines for exotic international labels. Every Wednesday night, Cijjo offers half off bottles of wine for those that dine-in.

There are currently three wine and beer-based "cocktails;" Cijjo does not have a liquor license and wants to focus on drinks that enhance the flavor of the food. Mission accomplished. The Cijjo Tonic ($9), made of Orange wine, Fever Tree Tonic Water, orange, rosemary and usually topped with edible flowers tasted like a faintly herbaceous gin and tonic. Quite refreshing.

To accompany the desserts, try the Neige Canadian, a crisp apple ice wine that blew my mind, or the fuller-bodied Blandy's 5 Year Old Alvada from Madeira Portugal, which called me back to a night drinking port and stargazing on a roof in Granada with my friends more than a decade ago. What sets Cijjo apart from its competitors is the evocative nature of its small plates: all of the dishes I've tried so far have had that Proustian ability to conjure fantastic culinary experiences I've had abroad, while putting a Northern California spin on them.