﻿ Lord of Misrule by Jaimy Gordon, and the debate over the National Book Award | On the Page | Nick Taylor | Palo Alto Online |
Include Photos | Include Comments | Print this page | Close Window

Lord of Misrule by Jaimy Gordon, and the debate over the National Book Award

Over the holidays I visited my 90-year-old grandmother in New York City. A widow for the last thirteen years, she lives alone in the apartment where she raised her two children. The apartment is mostly clean, but the back bedroom shows signs of hoarding, stocked as it is with enough cheap scotch and Campbell's soup to keep Grandma alive for several months after the apocalypse. She also keeps stacks of books back there, and every time I visit she encourages me to help myself. She prefers crime novels, and she has plenty of those, but I also sometimes find a few literary titles. This time around I picked up a novel called Lord of Misrule by Jaimy Gordon -- a book I knew about, because it had won the 2010 National Book Award, but had not yet read. I asked Grandma what she thought of it. "Garbage," she said. "Couldn't get through the first ten pages."

Like most of the literary fiction in Grandma's back room, Lord of Misrule was given to Grandma by my mother. My mom reads mostly serious fiction, with recommendations culled from NPR, the New York Times, and her public-library book club. She reads crime, too, but refuses to include only crime novels in the literary care packages she sends my grandmother. My mom sees it as her filial duty to make sure Grandma reads something "substantial" along with her pot boilers. So she sends Grandma books like Lord of Misrule -- which Grandma promptly adds to the reject pile.

In microcosm, my mother and grandmother are acting out one of the longest-running dramas in the publishing world. The phenomenon of handing out major awards to obscure or unheralded books is not new. Recently the debate has centered on the National Book Award, an annual literary prize created sixty years ago as an alternative to the Pulitzer Prize. The Award's genesis story, perhaps apocryphal, is that a group of literary types in the 1950s were appalled that William Faulkner had never won a Pulitzer, even though by that point he was a Nobel laureate. Laura Miller's 2011 essay, "How the National Book Awards Made Themselves Irrelevant" is a good place to start if you're interested in the debate. Miller argues that the National Book Award for fiction "often comes across as a Hail Mary pass for 'writer's writers', authors respected within a small community of literary devotees but largely unknown outside." The books that tend to win, she suggests, are "the literary equivalent of spinach."

I like spinach, and without questionLord of Misrule is a spinach type of book. The characters are complex and not especially likeable. The plot moves slowly, giving the setting time to seep into your skin. Gordon's subject is somewhat obscure by today's standards: the world of low-stakes horse racing. Once upon a time horse racing was a major theme in American life. Like boxing, which was the most popular sport in America for many years, "the track" has fallen out of favor with sports fans, who now prefer to watch (and wager on) teams of humans playing ball games. Gordon's book takes place in the near past in and around a third-rate West Virginia track called Indian Mound Downs. This is the last stop on the thoroughbred circuit -- the next destination for the horses who run at Indian Mounds is the knacker's. The story follows five characters associated with the track -- a "colored" groom, a reclusive bookmaker, a mannish female trainer, and a young couple (also trainers) who are new at Indian Downs. 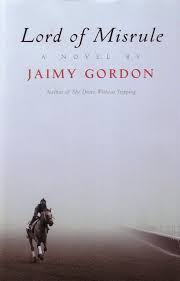 The novel is narrated in the third person, with the focus rotating by chapters among the five principal characters. Gordon employs a variant of what Flaubert called "free indirect discourse," that is, third-person narration that dips sometimes into the voice of the characters being described. Most contemporary third-person narration uses this technique to some extent, but Gordon takes it several steps further, narrating sometimes in full dialect (but still referring to the characters by their names, as you do in third-person). To my ear this sounds awkward, and I'm not totally convinced Gordon pulls it off. However as a fiction writer, I appreciate her willingness to stretch the limits of the free-indirect style, and I admire that she took risks with the narration. However I understand why my grandmother couldn't get through it. At times the narration-in-dialect functions as a barrier between the reader and the story, perhaps as a way of drawing our attention to the language used by these people. This is a classic postmodern move, but Grandma neither knew or cared to know -- she just wanted to read about horse racing. Indeed, my mother probably chose the book for her because she and my grandfather had once been fans of horse racing, but here's the problem: Lord of Misrule is only partially about horse racing; it's also about the style in which the author tells the story.

Grandma has no patience for stylistic experimentation, but the critics and writers who judge the National Book Award do. Last year I asked the Bay Area writer Yiyun Li, who served as a judge for the 2011 Awards, what it was like to be on the panel. She said it was gruelling; judges are asked to read something like three hundred books in a couple of months. You can imagine how, under those circumstances, a book with an innovative and compelling voice -- like Lord of Misrule or the 2011 winner, Salvage the Bones by Jesmyn Ward -- might capture the judges' attention. Without question the pool of worthy candidates in any given year is large, and it's hard to argue that the judges choose bad books. I can't think of a National Book Award winner that wasn't exceptional in multiple ways. The issue, it seems, is whether the judges of these awards ought to select books that readers less sophisticated than themselves might want to read -- or even enjoy.