The Academy's Snub of "Inside Llewyn Davis" 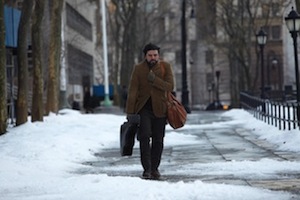 The Oscar nominations were recently announced, and who got snubbed seems to be a bigger deal than who was nominated. In particular, I noticed much disappointment and dismay that the Coen Brother's film about a second-rate folk singer Inside Llewyn Davis was not nominated for Best Picture. I had the exact opposite reaction. I felt nothing but relief that a well-made but not insightful movie failed to be put up for a major award. If that makes me a film Philistine, I'll embrace that title.

Llewyn Davis (Oscar Davis) is a second-rate folk singer whose partner has committed suicide. The film starts with the title character being summoned into a back alley to be kicked by a mysterious man. The rest of the movie tells us what happened in the days leading up to that point. We do learn why the man is kicking him, but the explanation is basically meaningless in the overall arc of the film.

We watch Llewyn crashing on couches, pissing people off, trying to carve out a solo career, learning that he got his friend's partner Jean (Carey Mulligan) pregnant, joining in a recording session for an amusing jingle that has all the makings of a top 100 song though it is not "art," and taking a road trip. There is little plot to speak of, though there are many events, many twists and turns.

Shot in grey and brown tones and featuring a lovely soundtrack of folk songs, Inside Llewyn Davis immediately tells us that we're supposed to interpret it as a "serious" work of art ? a "film," not a "movie." Never mind that it has nothing original to say about art or artists, never mind that its existential overtones are easy and on-the-nose. Perhaps the most annoying aspect of the movie from my perspective is that it uses visual and symbolic shortcuts to claim a meaning that the movie doesn't really earn. For example, down-on-his-luck Llewyn is sitting in a bathroom stall ?the graffiti (or literally "the writing on the wall") asks him something like "What are you doing?" that we are supposed to understand as meaningful.

I never got a sense that Llewyn was actually a working artist who was failing ? I saw instead that he was somebody who perceived himself as a musician, with all that entails. He cared more about performing the behaviors associated with deadbeat musicians, than actually making anything original and new.

Seriousness has become synonymous with bleak, and this film is definitely bleak. To its credit, however, it doesn't quite go all the way. It tantalizes us with other character's perspectives, suggesting a large world beyond Llewyn's limited vision. For example, when Llewyn calls Jean a "careerist," we see his point, but we also see hers. His sister says he should be more responsible even as he's trying (even though she is responsible for derailing his path towards responsibility).

I have been turning the movie over in my mind for a few days now. Not because of its substance, but because of the complaints about the Oscar snub. Most of the complaints seem to be that the movie is original. I have been thinking about whether it's original to make a "loser" the centerpiece of a movie. I suppose it is unusual to make a failure the star of a movie. We're more used to cinematic stories in the vein of A Star is Born.

What the Coen Brothers offer as an alternative, however, is simply the traditional perspective of parents who try to convince their children not to go to art school, become professional musicians or novelists or filmmakers. It's a hard, hard road they tell their kids, who often ignore them, particularly if they've never gone hungry or done embarrassing things for money. As a society, we are inclined to see the successes and avoid the many failures. The film is a dark cautionary tale: there is no hope for the vast majority of working artists. Most of us are mediocre. We can't even afford winter coats. This makes for a film with some truth behind it, but it doesn't make for a "best" film.

Do any adults actually need to be sold on the idea that the life on an artist is unrelentingly and sometimes unbearably hard and that most people don't make it, not because they're bad, but because they're just not good enough? At least the film had a great folk soundtrack and some beautiful visuals. I'm glad I saw it, but more glad I saw it for free.

Any thoughts about Inside Llewyn Davis or the Oscar nominations generally?