Champion of Choice by Cathleen Miller

I've been busy reading a fascinating new biography, Champion of Choice, about the Pakistani obstetrician and women's-rights activist Nafis Sadik. The biographer, Cathleen Miller, is a Bay Area local and a colleague of mine at San José State (and If it strikes you as a conflict of interest that I review books by authors I know, please read my explanation from a few posts back).

I know what you're thinking? Who is Nafis Sadik, and why does she deserve a 460-page biography? Why haven't I heard of her if she's so important? This strikes me as one of the fundamental problems with biographies: the ones that get the most attention (reviews in newspapers, plum placement in bookstores) tend to be about people we already know. Do we really need another biography of Abraham Lincoln? Probably not, but I'm sure there are plenty still to be written. In my mind, the truly valuable biographies bring to our attention people whose exemplary lives have somehow escaped public notice. Dr. Nafis Sadik is this sort of person, and Champion of Choice is this kind of book. 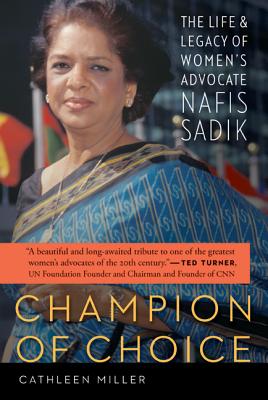 Nafis Sadik was born in 1929 to an unusual Muslim family in British India -- unusual because her father believed that it was important to educate girls, and he made sure his daughters received a proper education. At that time, women in most of the developing world were treated like livestock: girls were married off in their early teens, sometimes before they reached physical maturity, and women were expected to produce children continuously from their first period until menopause -- or until they died in childbirth. Growing up in India, Dr. Sadik saw all this first-hand, and when independence came in 1947 and the subcontinent was partitioned by faith, the young Muslim doctor found herself in a position of considerable influence in the new nation of Pakistan. She began a successful family-planning program, attracting attention from public-health officials all over the world, and was eventually lured the UN. She joined the fledgling UN Population Fund as its chief medical advisor and went on to become its director -- the first female head of a UN agency.

Biographer Miller argues, convincingly, that no person alive has done more to improve the quality of life on earth than Nafis Sadik. I know this is a big claim, but listen to these statistics: In 1970, just before Dr. Sadik joined the Population Fund, the average family size worldwide was six children. In 2000 it was three. During the same period, infant mortality in many countries dropped by four-fifths. Maternal mortality decreased by thirty-four percent. The study period coincides almost precisely with Dr. Sadik's tenure at the UN. Call it a coincidence if you dare, but read this book first.

One more item of note: Miller intersperses the chapters about Dr. Sadik with anecdotes from women around the world -- ordinary women whose lives exemplify the struggles Dr. Sadik has worked to address. We meet heroin-addicted Russian prostitutes, survivors of the genocide in Kosovo, girls brought from India to California as sex slaves, and many, many more. These stories provide color and texture but they also serve to place Dr. Sadik's story in context. They help us remember that although Dr. Sadik was by the end of her career one of the most powerful and influential women in the world, with a million frequent-flyer miles and a corner office in a New York skyscraper, she saw herself first and foremost as an obstetrician. She may be remembered with a plaque in Manhattan, but her real legacy will be written in the stories of women everywhere.