﻿ Is "American Hustle" the Best Movie of the Year? | Off Hours | Anita Felicelli | Palo Alto Online |
Include Photos | Include Comments | Print this page | Close Window

Is "American Hustle" the Best Movie of the Year? 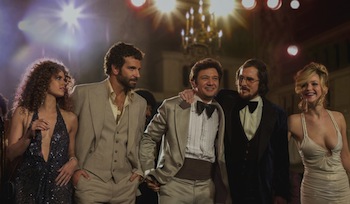 "Abscam" was a sting operation of 1978-1980, which resulted in the conviction of six corrupt members of the U.S House of Representatives, a U.S. senator, a New Jersey mayor and others. In that operation, con man Melvin Weinberg helped the FBI cook up the first major scheme to catch corrupt public officials. Melvin's story is very loosely captured in David O. Russell's phenomenal movie American Hustle, which opens with a placard that says "Some of this actually happened."

In the movie, a clever and complex con man Irving Rosenfeld (Christian Bale) falls in love with Sydney Prosser (Amy Adams), an ex-stripper who shares his love for Duke Ellington. Irving and Sydney develop Irving's cons by convincing desperate people that Sydney is an Englishwoman named Edith with London banking connections. Both are driven by the need to hide their shabby origins; both are masters of reinvention.

Caught by angsty and ambitious FBI agent Richie DiMaso (Bradley Cooper), Irving and Sydney are forced to work for the FBI to con powerful politicians and Mafioso. Irving comes up with a scheme in which various politicos will be offered bribes on behalf of a phony Arab sheik. In actuality, the Arab sheik is actually a Mexican FBI officer. The whole operation is threatened by Irving's psychologically unstable wife, Rosalyn (Jennifer Lawrence).

The "American hustle" of the title is not only Irving and Sydney's scams, but also the idea that Irving articulates: "we are all conning ourselves on way or another, just to get through life." This could have been just a fun, shiny, movie like Ocean's Eleven or Catch Me If You Can or a grim Martin Scorsese knock-off. Instead, both the comedy and the darkness have layers. Raw energy propels the audience headlong through a vulgar, decadent world. However, the screenplay is chockfull of cleverly phrased observations about survival and reinvention, and for all its hilarity, the movie is infused with an operatic sensibility.

All of the actors are terrific in their roles, which is essential for a character-driven ensemble piece like this one to succeed. Cooper's performance as DiMaso is perhaps a tad more convincing than he was in Silver Linings Playbook. Amy Adams gives an understated performance as Sydney Prosser, but the subtlety of her crucial role keeps the giddy story from spiraling out of control. Unsurprisingly, Christian Bale and Jennifer Lawrence, both of whom have won Oscars for past work in Russell movies, are both outstanding.

Christian Bale as Irving is paunchy, unattractive and still immensely enjoyable to watch. The movie opens on an excruciating scene of him trying to paste a toupee to his head. As a visionary who cooks up the con with the Arab sheik, Irving manages to maintain a strange balance between falling apart and thinking on his feet. He's a crook who cares about his responsibility to his adopted son.

Playing a troubled woman determined not to lose her husband, Jennifer Lawrence steals every scene she's in. Described in Irving's voiceover as the "Picasso of passive-aggressive karate," she has a sequence a little over two-thirds of the way into the movie in which she fluidly transitions between cheerful sadism, desperation, reproach, and matter of fact self-aggrandizement. She's absolutely riveting and hilarious.

Movies themselves can function like the best cons ? as Irving says, people believe what they want to believe. There are a couple of places where the plot doesn't feel as sharp as it could be, but I think to nitpick in this instance is to miss all the other pleasures this movie offers, to miss the pleasure of the con. This movie deserves to garner a lot of Oscar nominations, including Best Screenplay and Best Supporting Actress.

As in Russell's Silver Linings Playbook, there's a reveal (or reinvention) late in the movie, but I think Russell pulls it off much better in this one. From standout performances to smart, interesting writing, from period costumes to a perfect soundtrack, American Hustle is Russell's best movie and definitely the most entertaining movie I've seen in the theater this year.

If you've seen it, what did you think of American Hustle?