Why "The Desolation of Smaug" is So Disappointing 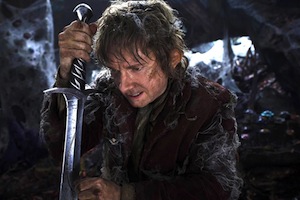 Peter Jackson's The Hobbit: The Desolation of Smaug isn't terrible, but it's not great either, at least not for those fans that preferred the well-paced children's classic adventure of J.R.R. Tolkien's The Hobbit to his somewhat ponderous and adult-oriented The Lord of the Rings. Jackson's decision to stretch a fun book out for three movies in order to embellish upon storytelling that's tight and well crafted plays out poorly.

To be sure, The Desolation of Smaug is more fun than An Unexpected Journey, the first movie in Jackson's The Hobbit trilogy. As the movie starts, Bilbo and the dwarves are making their way towards the mountain to recover the dwarves' treasure from the dragon Smaug. We're quickly thrown into their skirmishes with the interesting creatures of Middle-Earth. Watching in 3D makes all of these well-crafted pulse-pounding action sequences especially enjoyable (and partially justifies the obscene cost of going to the theater for a placeholder middle movie).

In particular, Jackson crafts a wonderful sequence in which Bilbo climbs to the top of some autumn trees to get a sense for how far they have left on the group's journey to the mountain and shakes out some beautiful blue butterflies. The serenity is disrupted by a riveting battle with giant forest spiders.

Another thing the movie does do well is its portrayal of Smaug, the intelligent but arrogant dragon that pillaged the dwarves' treasure. Voiced by Benedict Cumberbatch and gorgeously digital, Smaug and his interactions with Bilbo yield the most dynamic scenes of the movie.

The fun actions sequences are a marked improvement upon the first movie, but that's actually not saying much. Jackson adds an annoying and unnecessary romantic subplot between one of the dwarves and Tauriel, a girl elf warrior played by Evangeline Lilly. Lilly is okay in her role and I sympathize with the motivation for adding women to Tolkien's male-centric story, but this subplot and other efforts by Jackson to emphasize that this movie is the backstory for The Lord of the Rings detracts from rather than adds to the original.

I was also never sure whether all of the humor in the movie was intentional. Everyone speaks in that pompous breathy way that's meant to convey importance in fantasy movies and community theater Shakespeare productions. A scene in which the dwarves ride down the river in barrels is a true feat of technical genius, but it is also ridiculous.

Unlike Tolkien's The Lord of the Rings, Tolkien's The Hobbit is light-hearted, so sometimes the tonal choices make sense. On the other hand, Bilbo's personal growth ? his choice to be courageous and his journey towards heroism ? is part of what makes The Hobbit such a great story. There's some gravitas to that storyline in the book that gives depth to the humor. Actor Martin Freeman does an excellent job portraying Bilbo, but Jackson has surrounded him with too much farcical humor, too many drawn-out fight scenes and a painfully long run time to give this storyline its due.

Jackson's The Hobbit could have been a grand, stirring adventure, a story of how even the small, complacent and unimposing have the ability to become heroes. Instead this movie is just another bloated cookie-cutter action adventure fantasy with great CGI. This is all the more disappointing because Jackson's team did such a great job interpreting and trimming the fat from The Lord of the Rings.

Undoubtedly there are many Tolkien experts and fans of action/fantasy movies that will vehemently disagree with me. What did you think of the movie?