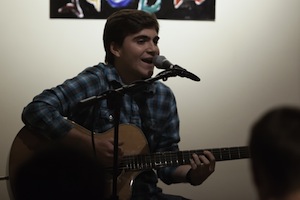 Unlike involvement in Habitat for Humanity or student government or sports, independent artistic pursuits aren't an automatic plus for college applications, which for me makes it particularly exciting when a young person is deeply involved with a craft. Although Silicon Valley is not an easy place for working artists, because of its great high school programs and many supportive parents that encourage their own and other people's kids, it can be an encouraging environment for artistically inclined teenagers. I wouldn't have had the stomach for the risk and uncertainty to pursue artistic ambitions as an adult were it not for the encouragement I received during my teenage years growing up in the Bay Area.

Zach Gospe is a talented 17-year-old Los Altos High School singer-songwriter who has been given the opportunity to record an EP with a successful music executive in Los Angeles. His diligent and personable best friend Riley Soward acts as his manager. Gospe and Soward are trying to raise $10,000 on Kickstarter in order to record the EP. With about two weeks to go, they have raised an impressive $7000. You can listen for free to Gospe's first EP Live at Midnight on SoundCloud.

Following is a lightly edited and condensed Q & A with Zach Gospe. (Photographs by Ian Mackey).

Anita: The first song on your last EP ("Follow Me Awake") is written in such a lovely, evocative way. Can you tell me a little bit about your process on that piece?

Zach: When I wrote "Follow Me Awake," I was at my grandparent's cabin in the Mendocino forest. The area has no cell phone connection, and the cabin had no internet and only limited access to electricity. Sitting in nature (distant in every way from the girl I wrote the song about) inspired the kind of classically romantic writing that shines through in parts of the song, heavy in metaphor and emotional imagery. With that particular song, the lyrics came first, more of a poem than anything else. I was then able to fit the words with the proper melody and guitar part.

Zach: Songwriting is a process that can take many forms, even for the same person. My most common structure for writing begins with an idea for a lyric, and then I build the music and lyrics at the same time from that idea. However, at any moment ? usually the moment when it is least expected ? inspiration can strike in the most unusual forms. Sometimes it is melody first, sometimes lyrics, sometimes both at once. The beauty of songwriting is that for every song it is slightly different.

Anita: Many of your songs appear to be love songs. What other themes inspire you?

Zach: Within my songs I often explore the intricacies of human connection. Love, of course, is the most prominent. I am often inspired by everyday interactions, from friendships to parent-child relationships. I aim to shed some light on these experiences.

Anita: What was the first song or artist that inspired you to want to write your own music?

Zach: I can say for certain that the first artist that inspired me to write my own music was John Mayer. Before that point, I had fiddled around with melodies. I thought on a grand scale of the arena rock of U2 or even the defining brilliance of the Beatles, but with Mayer, songwriting became accessible to me. That isn't to say that the songs are simple, but rather that they had a certain organic, passionate, man-and-his-guitar feel that I truly connected to emotionally. Just a boy with a guitar, I could attach myself to the style and began writing songs emulating his lyrical and melodic craft. 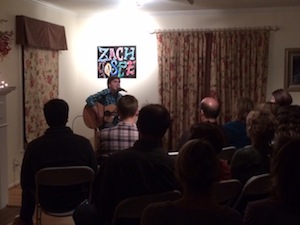 Anita: If your Kickstarter is successful, what is the timeline for your new EP? Any performances in your near future?

Zach: Currently I am working with our producer, Mark Mazzetti to finalize the songs that will be on the EP. If the Kickstarter succeeds, by February we will be ready to head to L.A. for the main recording session. The timeline for release of the E.P. is, of course, uncertain, but early summer would be a safe bet for release.

On the performance side, last Saturday I played at a house concert to raise money for the Kickstarter, and that was our biggest performance for a while. In the next couple of months, I will be playing at some open mics and hopefully a couple more house concerts.

Anita: What different genres have attracted your attention lately? Anything we would be surprised to know?

Recently, I have been exploring quite a few genres. In addition to what I normally listen to (for instance, John Mayer, Eric Clapton, and U2), I have been listening to more jazz influenced music, for instance Norah Jones. Additionally, I've been rediscovering the songs of Frank Sinatra. Although these songs have a much different feel than the songs I write, I have found many inspiring time-tested musical techniques within those songs that can be applied to any genre.

Anita: Do you enjoy writing or performing more at this stage?

Performance is a developing skill; crowds still rattle my nerves and I expect to an extent they always will. That being said, at a certain point in every performance I begin to get lost in the songs, and the experience becomes wonderfully rewarding and inspiring. The process of discovering a new song piques my creative curiosity to the extreme. Many of the best songs I have written I don't feel like I have written, but rather watched them develop on their own from a spark of inspiration.