A piece of cake: How a Sunnyvale woman launched a nonprofit that’s delivered 40,000 birthday cakes to underserved youth 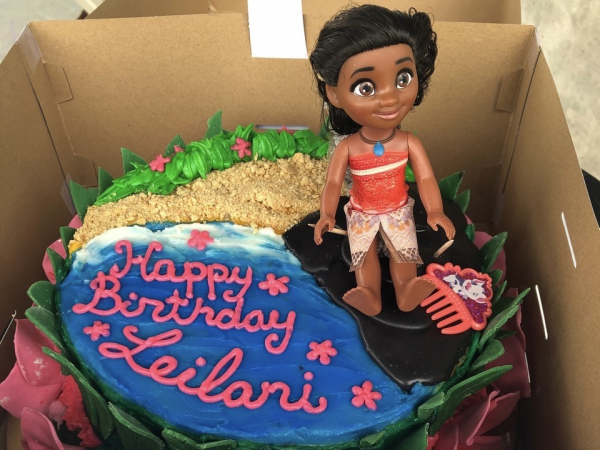 Twelve years after a Sunnyvale woman first decided to bake a few birthday cakes for a Los Altos nonprofit serving kids in foster care, Cake4Kids, now a national nonprofit, delivered its 40,000th cake to a youth in need this year.

It all started when Libby Gruender, a former program manager for satellite launches at Lockheed Martin, read an article in 2010 about a little girl in foster care whose foster mother made her a birthday cake. The girl burst into tears, and so the foster mother apologized, thinking she'd somehow hurt her feelings. But the girl told her she was crying because she'd never had a birthday cake before.

While that family was based in the Midwest, Gruender suspected there might be children in foster care in and around Sunnyvale who hadn't had birthday cakes. She had recently been diagnosed with melanoma and had decided to leave working in tech. She and a group of friends partnered with a foster care agency in Los Altos to bake cakes for the children it served, and the nonprofit effort expanded into Cake4Kids.

Gruender died from melanoma in 2013, but the organization she started lives on, inviting volunteers to bake personalized desserts for underserved kids in 21 regions nationwide, from Boston to Idaho, says Alison Bakewell, the organization's executive director and a resident of Santa Cruz County.

Today, Cake4Kids continues to serve local youth ages 1 to 24 who are in foster care or group homes, experienced domestic violence or human trafficking, who are without a parent or are experiencing poverty or homelessness. They coordinate with local nonprofits, including with East Palo Alto's Ecumenical Hunger Program and Menlo Park-based homeless services organization LifeMoves, to match volunteer bakers with children in need of cakes for birthdays and big milestones like graduations.

Bakewell says she took the helm of the organization earlier this year after working as director of operations for a number of years. Drawing on her IT background to help the nonprofit streamline its processes, she says that over time, the program expanded to other parts of the Bay Area and California before spreading to other states. This year, they're expanding to the Raleigh-Durham area in North Carolina, greater Madison in Wisconsin and the Hudson Valley area in New York.

But despite their national growth, there's still a significant need for bakers in Cake4Kids' home communities, Bakewell says. In September, Cake4Kids delivered 200 cakes just to youth in San Mateo and Santa Clara counties.

"And we're not even reaching all the social services agencies that are out there," she says. "There's definitely more kids out there we could be serving."

Delivered homemade children's birthday cakes are meeting a somewhat more niche need than larger-scale food aid or youth services nonprofits, and Bakewell admits it sometimes takes a lot of patience while working with other nonprofits, stretched thin meeting their clients' other needs, to get their support to coordinate cake handoffs to the kids they serve. And their program is rarely a top priority for grantmakers – only about 5% of their funding comes from grants, Bakewell says. The rest comes from private donations, including funds raised at a recent benefit dinner in Palo Alto.

Often when she tells people about the work that Cake4Kids does, people say "Oh, that's so sweet," Bakewell says.

But the underlying heart of the program is about more than donated desserts, she argues. "We're making an impact on youth, and we're setting them up for success," she says. "It's really important that we take care of these kids, and that we show them they're important, and that someone cares about them. … And, it is sweet."

"A lot of these kids feel let down by adults or by other people," Bakewell says. Sometimes, she adds, "the kids feel like they're left behind or they don't matter."

"When a perfect stranger bakes a cake for them, they feel like someone cares, and it really makes a huge impact on their self-esteem. They know someone else cares about them. They start caring about themselves and thinking that they can do more than what they thought they could before." 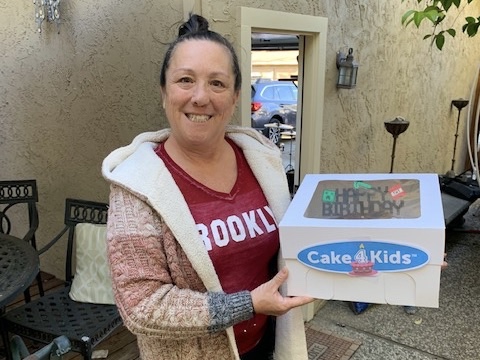 A baker with a cake she plans to deliver. (Photo courtesy Cake4Kids)

For home bakers, it's also a rewarding way to give back.

"As a baker, it feels fantastic to drop that cake off to know that you're impacting a child's life," Bakewell says. "We hear it over and over again, for the bakers, it just lights you up inside when you know you're making a child's day."

The bakers who participate are volunteers who have gone through a mandatory training and have been given instruction about packaging, allergens and food safety. Then they're given access to an online portal that tracks all of the needed desserts for the next month in each region. To preserve children's privacy and safety, deliveries are made to agency offices rather than directly to their recipients.

While some volunteers are professional bakers, most are home bakers looking for an outlet to give back to the community, Bakewell says. "The idea of a child going without a birthday cake just doesn't sound right to them."

Bakers can choose as many or as few assignments to take on as they'd like. Assignments vary depending on whether the child wants cupcakes, cookies, bars, brownies or a cake, and they may include additional requests about the flavor and theme, as well as whether there are any allergies. Bakers are required to deliver the desserts themselves and confirm their commitment to completing the assignment along the way – "we want to make sure that we never disappoint a child," Bakewell says.

Many volunteers also use their baking assignments to strengthen their cake-decorating skills as they go, taking baking classes or picking up techniques on YouTube as they work their way up to completing more complex requests, she says. "I think that being able to do cookies, bars, brownies or cupcakes is a good entry point for people who feel like maybe their skills aren't up to these beautiful cakes that they see."

And while they don't want any kid to get a messy, falling-apart cake, she says, they understand that the bakers aren't always perfect, either.

"I think people just are so engaged in the idea of making that child feel special that they put a lot of heart and soul in it. I mean, it might not be the prettiest cake on the face of the earth, but a lot of love went into the cake."

This barbecue business was kicked out of Belmont. Now it's a Sunday fixture in Redwood City.
By The Peninsula Foodist | 6 comments | 5,501 views

Can the Memphis police behavior ever happen here?
By Diana Diamond | 42 comments | 2,412 views