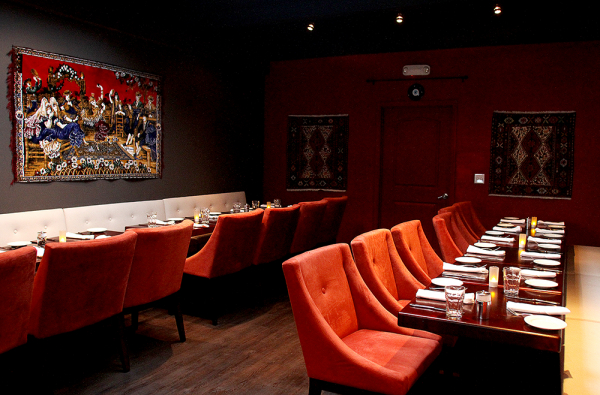 The bar and lounge at the former Anatolian Kitchen restaurant, offering dining space for large groups. Photo by Veronica Weber.

Anatolian Kitchen, a Kurdish and Turkish restaurant that operated for about a decade on Palo Alto's Birch Street before closing in 2021, is scheduled to reopen down the block in December, says owner Dino Tekdemir.

During the pandemic, Tekdemir decided to turn the former Anatolian Kitchen location at 2323 Birch St. into his second location of Naschmarkt, an Austrian restaurant. Naschmarkt's first location is in Campbell, and there were a number of cost-saving benefits that came with offering just one type of cuisine across two locations, he said in an Oct. 25 interview.

With just one type of cuisine, it was easier to transfer employees between locations and manage equipment and inventory.

But closing Anatolian Kitchen had saddened him, his family and his customers, he says.

When the COVID-19 pandemic hit, Tekdemir and his team donated meals through Anatolian Kitchen to the community, and since it's closed, they've heard from many customers about how much they miss it.

So when he got word that a space was opening up on California Avenue – the site of the Port of Peri Peri restaurant – he decided to take it.

The Port of Peri Peri opened in June 2020, offering Portuguese grilled chicken among other items in a fast-casual space, itself taking over the former Spice Kit restaurant location.

The new Anatolian Kitchen menu may have a few changes from the previous one, but it will highlight meats, kebabs, lamb, chicken, fish and vegetarian options.

Meanwhile, the interior will have undergo a "cosmetic touch-up" from its current setup, with a new chandelier, retiled bathrooms and marble tables, Tekdemir says.

He is also the owner behind Nemea Greek Taverna, an upscale Greek eatery in San Jose that was hit by a fire on Mother's Day in 2021. Reconstruction at the site is still happening, and Tekdemir has decided to transfer the liquor license from Nemea Greek Taverna to Anatolian Kitchen – a move that perhaps triggered the false report that he was opening a location of the Greek restaurant in Palo Alto.

Much of the dining demand in San Jose had come from office workers, conference attendees and hotel guests, who haven't returned as he'd hoped. As of now, he says they're not planning to renew the lease there. "It's really sad to let that kind of restaurant go."

Another benefit of reopening Anatolian Kitchen is that the fare is easier to cater and share than the Austrian fare offered at Naschmarkt, which means that it will be easier for them to donate meals in the community, he says. His daughters attend school in Palo Alto and they're already planning to bring an Anatolian Kitchen lunch to the teachers when the restaurant reopens the first or second week of December.

"It's going to be amazing. I can't wait," Tekdemir says.

CalAveLocal is a registered user.

Report Objectionable Content
Posted by Mondoman, a resident of Green Acres,
on Oct 29, 2022 at 2:06 pm
Mondoman is a registered user.


Yay for Anatolian Kitchen - we've enjoyed it over the years and will be glad to see its new incarnation.

Report Objectionable Content
Posted by Twentse, a resident of Menlo Park: Fair Oaks,
on Oct 31, 2022 at 3:40 pm
Twentse is a registered user.

This barbecue business was kicked out of Belmont. Now it's a Sunday fixture in Redwood City.
By The Peninsula Foodist | 6 comments | 5,498 views

Can the Memphis police behavior ever happen here?
By Diana Diamond | 42 comments | 2,411 views