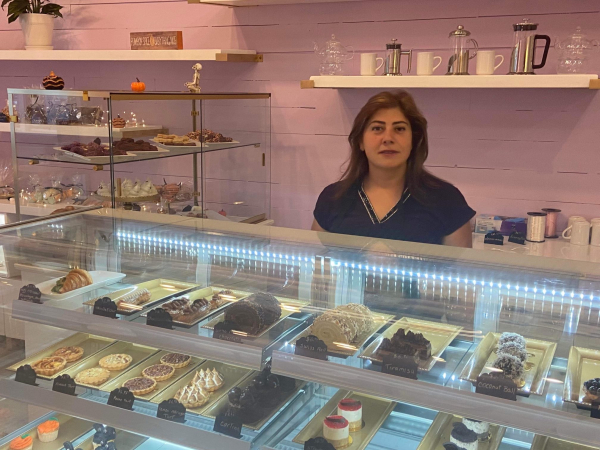 The bakery opened about two weeks ago, according to Joseph Petraki, who runs the patisserie with his parents, Lara Faddoul and Edgar Petraki. Edgar Petraki is a trained pastry chef who worked for the past couple of decades in various pastry shops and bakeries before he opened his own family patisserie in Montreal called Sprinkles. The family recently moved to California from Montreal, Joseph Petraki says.

The bakery offers French pastries, cookies, croissants, cakes, mousse, cupcakes, eclairs, tarts and petit fours – plus custom orders. For customers who eat in, the patisserie also serves French-press coffee and tea in teapots so that customers can serve themselves at their tables. 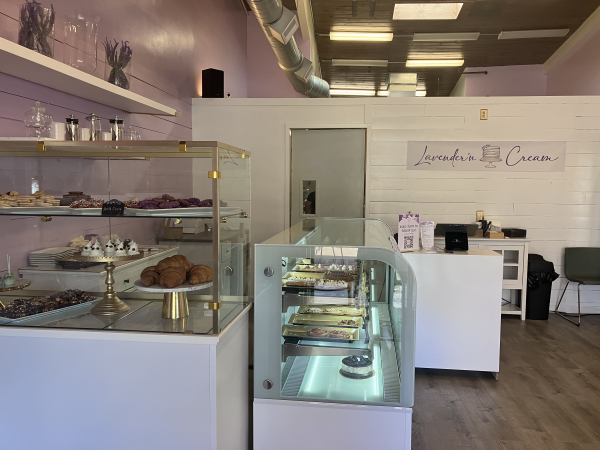 The interior of Lavender 'n Cream, a new patisserie in Redwood City. (Photo by Kate Bradshaw)

The menu includes items such as breakfast croissants with fillings like egg, ham and cheese, plus salads, sandwiches and Mediterranean pies stuffed with spinach, cheese or ground beef, according to Petraki.

Two specialty items that he expects to stand out to customers are a lavender-flavored cake and a Cortina cake, a chocolate cake with Diplomat cream. Also on offer are birthday kits, which include all the sweets one would need to celebrate a birthday like cake pops, Rice Krispies treats, cookies, macarons and cupcakes, he adds.

They also plan to have seasonal specialty items, such as a yule log or a tree made of cookies for Christmas and chocolate bunnies for Easter.

So far, the patisserie has earned positive feedback from the community, Petraki says. "They seem very enthusiastic to see what we have.”

This barbecue business was kicked out of Belmont. Now it's a Sunday fixture in Redwood City.
By The Peninsula Foodist | 6 comments | 5,504 views

Can the Memphis police behavior ever happen here?
By Diana Diamond | 43 comments | 2,424 views