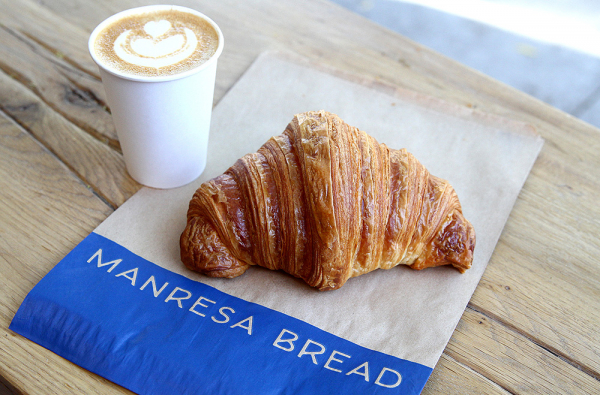 A latté and croissant at Manresa Bread in Los Altos. Photo by Veronica Weber.

Manresa Bread is expanding to a 1,400-square-foot flagship location in downtown Los Gatos, according to a spokesperson for the bakery.

The original bakery location, located at 276 N. Santa Cruz Ave. in Los Gatos, will be temporarily closed. More details are forthcoming about another concept for that location at the end of the year, the spokesperson said.

The new Los Gatos location will add hot items to its menu, offering items similar to what's on the menu at Manresa Bread's Campbell location, an all-day cafe with hot and grab-and-go sandwiches, quiches, Verve coffee and lemonade, plus the breads they're best known for.

Located next to The Lexington House restaurant, the new Manresa Bread location will offer both outdoor and indoor seating, something customers have said they want, the spokesperson said.

The opening date has not yet been announced, but the final inspection is planned for this week.

The local bakery is expanding on both sides of the Santa Cruz Mountains: It launched its Palo Alto location at the Town & Country shopping center this past April and plans to open a Santa Cruz location Nov. 7 at 300 Ingalls St. for pastries, breads and grab-and-go items.

This barbecue business was kicked out of Belmont. Now it's a Sunday fixture in Redwood City.
By The Peninsula Foodist | 6 comments | 5,505 views

Can the Memphis police behavior ever happen here?
By Diana Diamond | 43 comments | 2,427 views