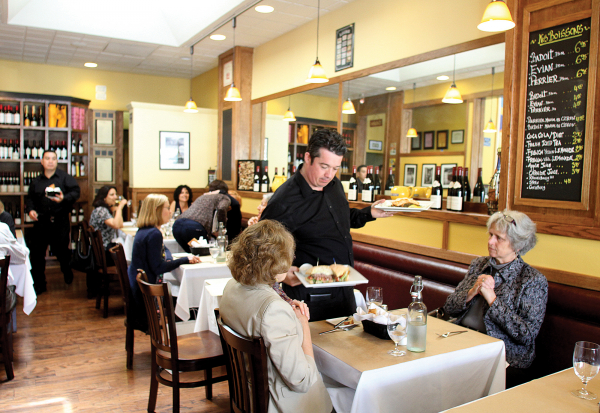 Max Rouccoule, co-owner of Pastis, brings out lunch to diners in the restaurant on April 17, 2012. Photo by Veronica Weber.

Supplies and items from the restaurant are now being sold on Facebook Marketplace.

Pastis, located at 447 California Ave., was first owned by Bernard Cartal and his nephew, Max Roucoule. By April 2020, it was owned by Serkan Karabacak, who also owned Palo Alto restaurants Cafe Brioche and Tuba.

At the time, he was holding on to all of the approximately 35 staff members he employed at his five restaurants (including two in San Francisco) while serving donated meals to around 120 seniors at Palo Alto's Stevenson House.

None of those three restaurants – Pastis, Cafe Brioche or Tuba – is open today. 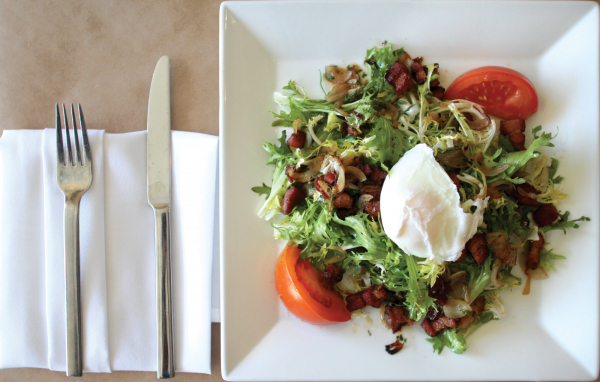 Pastis first opened in late 2011, taking over the spot that Joanie's Cafe had previously occupied.

The restaurant offered "possibly the most authentic casual French restaurant experience in the area," according to Palo Alto Weekly food critic Dale Bentson in a 2012 review.

"Pastis is a vibrant addition to the California Avenue corridor. It's French all right, from the waitstaff to the decor. And the food is bistro-worthy: tasty, filling and well-prepared, with prices that don't offend," Bentson wrote.

Pastis is the latest restaurant to shutter on California Avenue, with eateries including The Counter, Subway and Antonio’s Nut House shutting down during the pandemic. One longtime business owner told the Palo Alto Weekly last fall that she hadn’t seen such a spate of vacancies in nearly 30 years of operating in the district.


This story will be updated when more information is available.

Rebecca Eisenberg is a registered user.


Yet another loss to California Ave specifically, and Palo Alto generally.

Our city could adjust its policies and require the large employers on and near California Ave to pay their fair share for the traffic, noise, and congestion they create (through a progressive, rather than regressive, business tax for example) and revenues from that tax could be used to assist our struggling small businesses, including retail and restaurants. Mountain View used that strategy, and Castro Street flourished as a result.

I greatly enjoyed Pastis and wish the owners and staff the best in finding a soft landing. We will miss you on California Ave.!

Report Objectionable Content
Posted by Online Name, a resident of Embarcadero Oaks/Leland,
on Oct 18, 2022 at 11:12 am
Online Name is a registered user.


We've enjoyed Pastis greatly over the years but the last time we were there, both the food and service were severely lacking.

Otherwise I agree with Rebecca Eisenberg above re big businesses doing their fair share. I'd go a step further and say it's long overdue for City Council to bar big employers from having their own cafeterias, thus hurting nearby restaurants.

Let then go to St Michael's Alley, for example, and ask them what Palantir's cafeterias did to their lunch trade.

Report Objectionable Content
Posted by Ric Almond, a resident of Crescent Park,
on Oct 18, 2022 at 11:57 am
Ric Almond is a registered user.


My wife of 50 years and I "discovered" Pastis shortly after it opened, and it became our go-to place for casual dinners out. After she died, and I re-married, it was comfortable enough for me to bring my new partner there. It may sound corny, but the bustle of the waiters, their interest in one's food experience, and the ambiance took us to Paris for a couple of hours every time. Hopefully, there will be a rebirth.

Report Objectionable Content
Posted by Vin Ordinaire, a resident of College Terrace,
on Oct 19, 2022 at 7:50 am
Vin Ordinaire is a registered user.


Best wishes to Max. My husband and I had just moved to College Terrace the week before 9/11 and Max had just begun serving dinner at the old Joanie's spot (later to become Pastis). The food was very good , but the treasure was Max himself--attentive, funny, and clearly loved food and feeding people. We always called it Max's Place...

Report Objectionable Content
Posted by Chris K, a resident of another community,
on Nov 4, 2022 at 6:14 pm
Chris K is a registered user.


I first met Max when he and I were fixtures at Joanie's for Saturday morning breakfast - he running the place, me enjoying the walk from my rented house on Olive Avenue. We bonded over a shared love of old cars and Gallic shrugs. I was really happy for him when he finally got to run his own place his own way at Pastis - in the same location where we first met. He always had a smile for me and I was always glad to see him behind the bar, along with all the rest of the "French mafia" characters that I grew to know. I was sorry to see him leave that behind, and am sorry to see Pastis close.

Good luck to all.

Can the Memphis police behavior ever happen here?
By Diana Diamond | 42 comments | 2,409 views