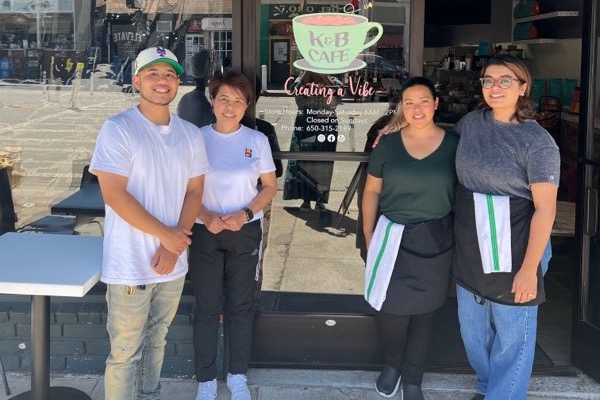 From left, Amiel and Myrna Baesa of Wyldflour and Bianca and Kamal Johal of K&B Cafe. Photo courtesy Amiel Baesa.

Sisters-in-law Kamal and Bianca Johal are bringing Indian and Filipino flavors with a California twist to their new San Mateo cafe, K&B Cafe. The eatery offers a range of Indian sweets made in-house, as well as Filipino pastries, breakfast foods and espresso drinks.

The family has a long history in the 25th Avenue neighborhood. Kamal says her mother-in-law retired from the post office on W. 25th Avenue, while her father-in-law previously ran a liquor store on the same street. Meanwhile, Bianca grew up just north in South San Francisco.

"There's a lot of family history here for us," Kamal Johal says.

One of their vendors is Wyldflour, a mother-son Filipino baking business that began during the pandemic. Amiel Baesa of Daly City says that after he graduated from culinary school at Le Cordon Bleu's Los Angeles campus, he started working with his mom, Myrna, who had influenced his cooking since he was a kid. They began to make empanadas together, which they sold to friends and family.

It wasn't until 2020, when Baesa decided to bake ube pandesal, that their business began to really take off. He posted a photo of the bread on Instagram and the next day, someone asked to buy 200 pieces of it. After that, they were booked with requests every day for six months, he says. From there, he and his mom started going to festivals, pop-ups and markets to spread the word. Now they've got their first gig as vendors, supplying K&B Cafe with Filipino pastries on Mondays, Wednesdays and Fridays.

The ube pandesals are made with three fillings – Nutella, cheese and matcha cream cheese, which are hard to find elsewhere, he says.

Their empanadas are filled with pork sisig and wagyu garlic beef. Their newest flavor is an ube empanada with Filipino sweet pork sausage, egg and papaya relish.

"It's cool to see that Filipino food is being more exposed to the national scene," he says. "Being Filipino, it's an awesome feeling. I'm happy that people are enjoying our food."

For Kamal Johal, Amiel and Myrna's family-oriented focus at Wyldflour resonated with her family business' mission at K&B Cafe.

K&B Cafe also offers Indian sweets including barfi, which, she says, has a fudge-like texture but is not as rich or sweet.

"It's a homey environment, all about the community, small businesses and helping each other out," she says.

Can the Memphis police behavior ever happen here?
By Diana Diamond | 42 comments | 2,409 views