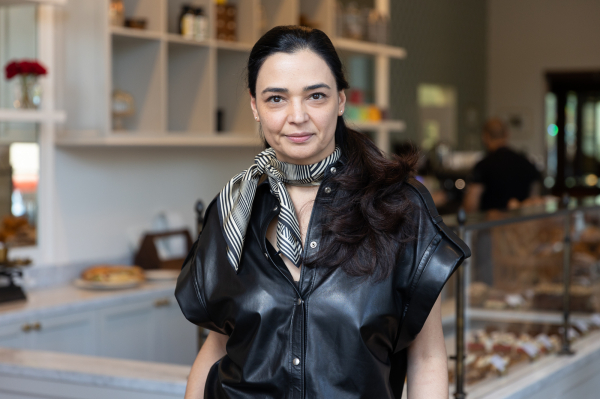 Debora Ferrand, owner of Mademoiselle Colette, at the cafe in Redwood City on May, 10, 2022. Photo by Magali Gauthier.

Atherton residents will have to wait a little longer to satiate their sweet tooths with the delay of a new cafe coming to town.

Local French patisserie Mademoiselle Colette owner Debora Ferrand had hoped for a fall opening of her latest cafe in Atherton's new library, but difficulty securing a contractor has pushed it back until January 2023.

Mademoiselle Colette, which operates cafes in Redwood City, Palo Alto and Menlo Park, along with a ghost kitchen in Mountain View, planned to begin making $151,000 in improvements to the 250-square-foot space at at 2 Dinkelspiel Station Lane in May or June, but work has not yet started.

"We have the same problem in everything right now," she said. "It's so hard to find people (to do the work). ... I'm disappointed. I receive emails every day about 'when are you open?' It's a new economy, a new reality. We need to be patient."

Ferrand said she is now waiting for final reports on electricity and plumbing. She will then apply for building permits with the town.

She said part of dealing with the "new reality" is an economy that has shipping delays and understaffing.

She is "a little sad" it won't be open in time for Christmas, but looks forward to serving La Galette des rois, or King's Cake, which typically has a small trinket or figurine prize hidden inside, to her customers in January. The cake is traditionally composed of two circles of puff pastry with frangipane (almond custard).

Although she won’t be able to serve the cake with a figurine, the French tradition is to serve the cake on the Epiphany, Jan. 6, which marks the arrival of the three wise men in Bethlehem who delivered gifts to the baby Jesus. Whoever finds the trinket is king or queen for the day and wears a golden crown. 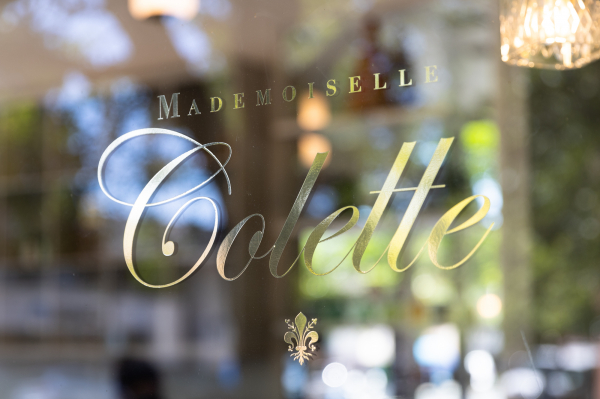 A decal reads "Mademoiselle Colette" at the Redwood City location of the café on May 10, 2022. Photo by Magali Gauthier.

Ferrand has called the cafe a "Baby Colette" or "little sister" to her other cafes. She's envisioning it having a younger look, swapping out her other cafes' ivy coloring for pastels and a wall with paper flowers.

"The overall look and design will be different; it will be a little more young and fresh," she said. "Because this space is so small, I want to create an ambience that's a little bit different."

The cafe is located in the $19.1 million, 10,000-square-foot new library. The library is part of the town's $32 million civic center project.

Ferrand opened the local company's first cafe on Santa Cruz Avenue in Menlo Park in 2015. Born in Brazil but raised in France, she attended Le Cordon Bleu and studied at the School of Alain Ducasse in France. 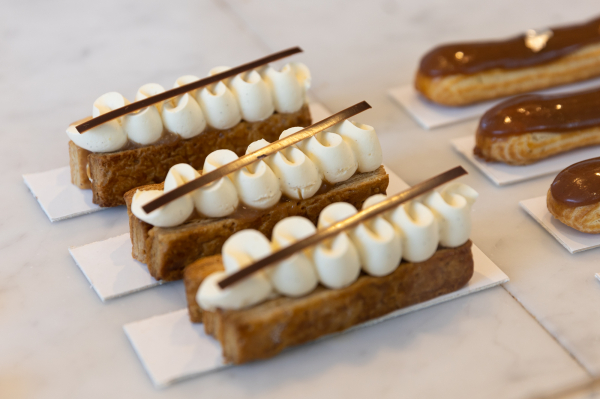 The vanilla mille-feuille at Mademoiselle Colette in Redwood City on May 10, 2022. The layers of puff pastry are sandwiched between vanilla bean cream. Photo by Magali Gauthier.

With no kitchen at the Atherton location, she will serve similar items but adapt them. For example, her avocado toast (which will be made on homemade sourdough bread with pomegranates, sesame seeds, onions, pickles and lime sauce) would come without a poached egg.

She plans to prepare food in the Menlo Park kitchen and reheat it in a countertop oven in Atherton. Proposed offerings include raspberry financiers, eclairs, a variety of salads and sandwiches (including croque monsieurs), along with warm beverages, according to her proposal to the town.

Some $30,000 of the planned renovations will go toward food equipment, according to the cafe's proposal. An approximately 2,000-square-foot deck and terrace fronts the cafe space.

Rent will be free for the cafe's first year of operations, then after it would pay 4% of the cafe's prior month's earnings, capped at $35,000 annually.

Mademoiselle Colette signed a five-year lease with the town, according to City Manager George Rodericks.

She hopes to bring a small ice cream and coffee cart to the Atherton cafe, along with a high tea service. Wine is also a possibility, if Ferrand can obtain a liquor license.

The Peninsula Foodist is a registered user.

This barbecue business was kicked out of Belmont. Now it's a Sunday fixture in Redwood City.
By The Peninsula Foodist | 2 comments | 4,629 views

Doing more with the natural spaces we have
By Sherry Listgarten | 8 comments | 3,275 views

Can the Memphis police behavior ever happen here?
By Diana Diamond | 24 comments | 1,497 views