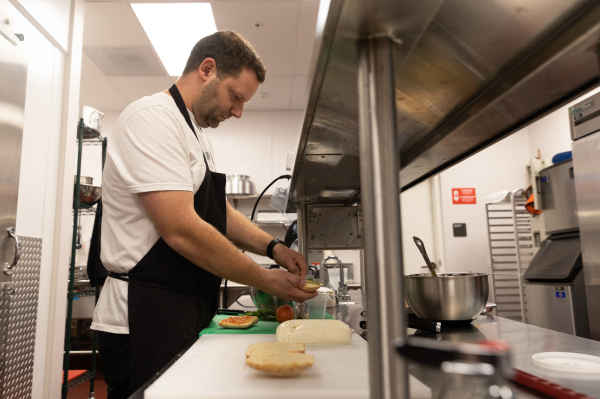 Chef Julien Cellier shows staff members how to make the prosciutto sandwich that will be for sale at The Redwood at Avenidas on Sept. 27. Photo by Magali Gauthier.

After a nearly three-year hiatus, The Redwood, a cafe at Avenidas in downtown Palo Alto, will open its doors starting Monday, Oct. 3. Led by chef Julien Cellier, the cafe will serve breakfast and lunch Monday through Friday.

This is the first cafe Cellier has ever run, a step that builds on a roughly 15 year-career in the industry following his graduation from the Vatel Institute in Paris.

Cellier, who is originally from Lyon, France, has spent years working in both France and the U.S., including in Wisconsin and Washington, D.C. Two years ago he launched a business offering catering, packaged meals and private chef services in Palo Alto. Even though information about his business spread only through word of mouth, he soon found himself in need of a larger kitchen and staff to fulfill the orders that were coming in, he says. His clients routinely told him they'd love to have a place where they can eat his culinary creations any time. 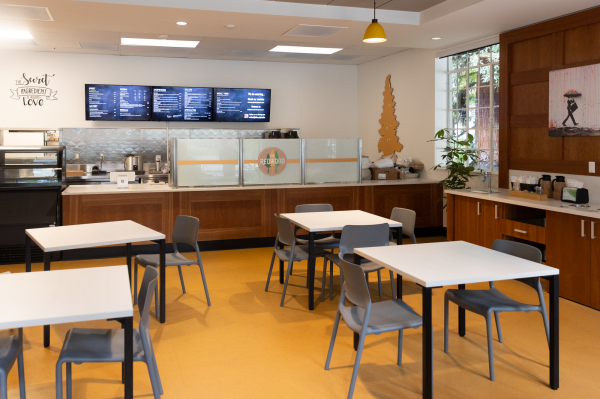 The interiors of The Redwood at Avenidas on Sept. 27. Photo by Magali Gauthier.

Eventually he connected with Avenidas, a nonprofit serving Peninsula senior citizens that had lost its previous cafe vendor when the pandemic hit. After an extensive interview process, Avenidas and Cellier decided to team up. Since then, Cellier says, he and his staff have been working hard to prepare the cafe menu and ready the space for customers.

Amy Yotopoulos, Avenidas' president and CEO, says that when she started in the role about a year ago, one of the first and most frequent questions she received was, “When is the cafe reopening?”

"It took some time, as things do these days, but it was worth the wait," she says.

Incorporating a cafe space into Avenidas was a concept that came about when the senior center was remodeled back in 2017 and 2018, she says. The idea was that in many homes, the kitchen and dining rooms are key household gathering places. And while senior centers are generally open to the public, sometimes people don't think there's anything there for them. That's a notion they hope to change by inviting the public into the new cafe.

One thing customers might notice are the very reasonable-by-Palo Alto-standards prices, she adds. Avenidas members will receive a 10% discount on all listed prices. Most lunch items are $11 to $12, with breakfast items $6 and under.

For Cellier, affordability is an important element of his approach to cuisine. "I've always tried to defend affordable food or gastronomy. I think that gastronomy should be for everyone, and not only for rich people," he says. 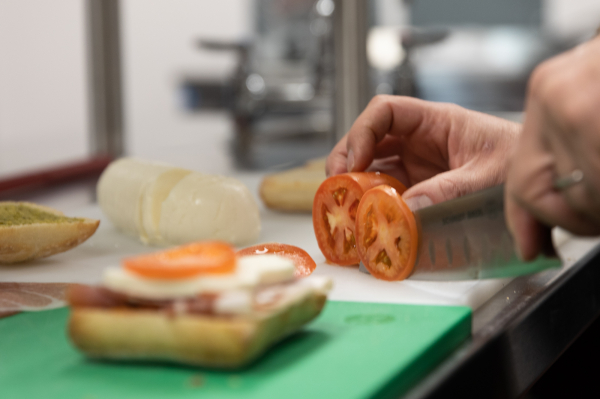 Chef Julien Cellier slices a tomato while making the prosciutto sandwich that will be for sale at The Redwood at Avenidas on Sept. 27. Photo by Magali Gauthier.

When asked whether there are any special menu considerations he's making for the older adults Avenidas serves, Cellier says he's eager to serve the same menu to all customers. He plans to change up the menu with some regularity based on what's in season, and wants to help customers of all ages discover new foods.

Many menu items have either a special ingredient or a subtle French touch. For instance, the prosciutto sandwich has a sauce with fire-roasted eggplant and red peppers, while the roast beef sandwich comes with a French bearnaise sauce flavored with shallots and tarragon. These offerings are in addition to more clearly French cafe staples, like the croque monsieur and the quiche Lorraine.

Cellier will continue to offer prepared meals, catering and private chef services, balancing the restaurant with work on weekends. His weekly specials are posted on his website and are available for pickup at Avenidas, with the latest dishes including pork stew, lasagna and chicken Basquaise.

"I don't feel like I'm working every day. I enjoy what I do, and I'm so passionate about it," Cellier says. "I spend a lot of time here in the kitchen, but I like it."

This barbecue business was kicked out of Belmont. Now it's a Sunday fixture in Redwood City.
By The Peninsula Foodist | 6 comments | 5,504 views

Can the Memphis police behavior ever happen here?
By Diana Diamond | 43 comments | 2,424 views