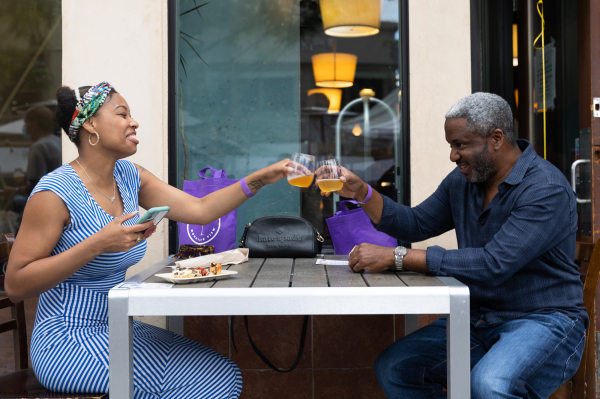 A line spilled out the door at Blue Line Pizza on June 22 as Taste of Mountain View event-goers waited to try the Castro Street restaurant's Chicago style deep-dish pizza. Eyes lit up as Blue Line Manager Eric Chan brought out a freshly made white pie, one of the restaurant's signature pizzas loaded with gooey mozzarella, feta, roasted zucchini and fresh tomatoes atop a garlic-infused olive oil base.

Blue Line Pizza was one of 19 Castro Street businesses that opened their doors to the community Wednesday evening, each offering bite-sized samplings of their most-loved menu items accompanied by local wine and beer vendors. The event, put on by the Mountain View Chamber of Commerce and the Mountain View Downtown Business Association, brought about 600 people into downtown to enjoy the second iteration of Taste of Mountain View. The food, wine and beer walk first started last November.
"The exposure is great," Chan said during the event. "We're talking to all kinds of people from different parts of the Bay Area, some people from out of town."

Restaurant bloggers Lala Mayjer and Michael Leadon came from San Jose to experience Mountain View's culinary scene, and after trying a bite from Asian Box next door, Blue Line was next on the list. Leadon said he's been before, so he already knew he was in for some delicious pizza.

Mayjer said she appreciated the attention to detail put into the Taste of Mountain View goodie bags. The mini purple tote bag came equipped with hand sanitizer, a set of utensils, a reusable plastic wine glass, compostable plate, a map of participating businesses and a raffle passport that patrons could get stamped at each stop and then turn in for a chance to win prizes.

"The goodie bag, the whole stamp passport thing, it's like a game. It's fun," Mayjer said after finishing off her pizza slice. 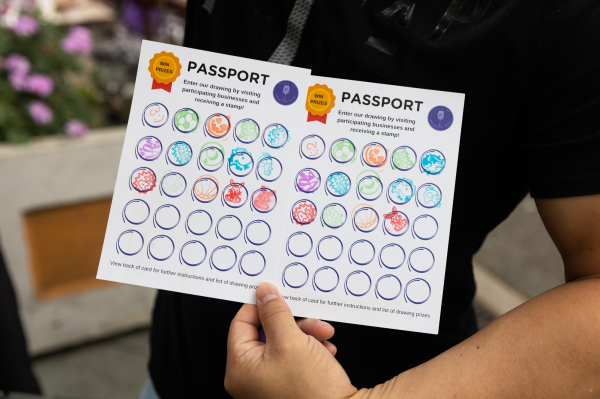 A Taste of Mountain View participant shows off all the passport stamps he has received during the event. Photo by Magali Gauthier.

Leadon, an avid foodie, has tried almost every restaurant on Castro Street, so he was surprised to discover a place he hadn't been to before: Rootstock Wine Bar.

"It's funny because I've driven over this street, and I've never seen that place," Mayjer added. "So now I know there's a wine place there."

Chamber CEO and President Peter Katz said that's the goal of the event: to help folks discover restaurants in Mountain View that they've either never heard of or just haven't had a chance to try yet. The event has no limit on how many food, wine and beer tastings ticket holders can try.

"The idea is really to get people inside the businesses' doorsteps so they can showcase what they do, be introduced to what the business is all about, and hopefully come back," Katz said. "A lot of the businesses said they would do special deals that night, which is good to get people back. I think that the real benefit of this is that it showcases Mountain View and showcases the small businesses, giving them a chance to shine and be in the spotlight." 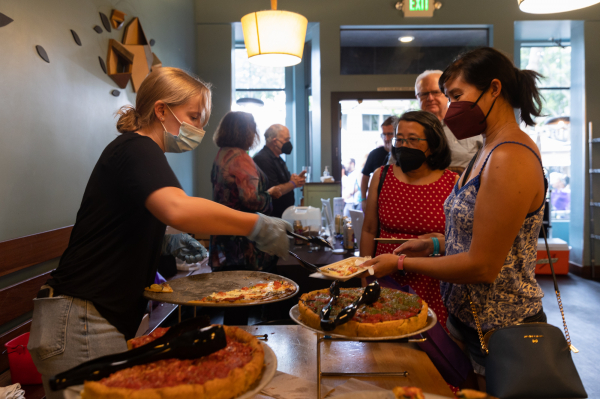 Casa Lupe co-owner Kevin Thompson, whose restaurant has served up Mexican comfort food for the last 24 years, said participating in the event last November "really did make an impact," so doing it for a second time was an easy choice.

"The community has been so good to us. It almost gets me emotional, because during COVID there were a lot of businesses that closed," Thompson said as event-goers stopped by to snag some chips and fresh salsa, Casa Lupe's offering for the night. "But our patrons came and supported us, did whatever they could to make sure that the doors stayed open. ... You get a lot of people that attend this that really aren't familiar with all the restaurants, so we have got a lot of new (patrons) just because they come to the Taste of Mountain View."

Retail store owners had the opportunity to open their doors too, offering small bites and drinks to bring people in and promote their small businesses. The chamber helps facilitate a partnership with a local restaurant, winery or brewery so that retail stores can "feel a part of this as much as everyone else," Katz said.

"It's not their product that people are eating or drinking but it is their products in their store that people are surrounded by," he said. "They look around and say, 'Oh my gosh, I never knew this was here.' A lot of them (business owners) report an increase in sales that night and in subsequent months."

The next Taste of Mountain View is scheduled for November.

"The Downtown Business Association, the chamber, and the city are all committed to looking for more events and more creative ways we can bring vitality and foot traffic and commerce to downtown and other areas of the city," Katz said. "It's likely we'll do something similar in other parts of the city in the future."

Our First Anniversary in my Husband’s Retirement
By Chandrama Anderson | 0 comments | 2,604 views