Say cheers to SF Beer Week at events throughout the Peninsula 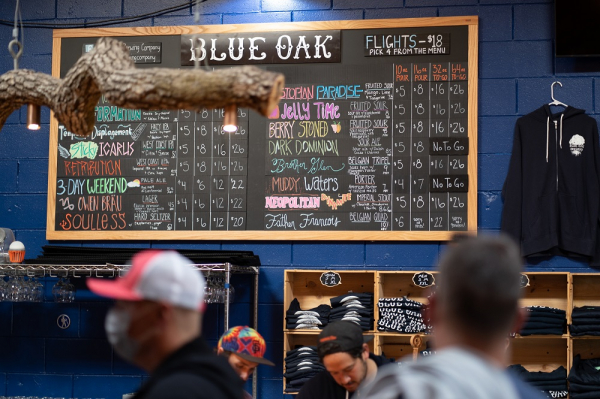 Grab a craft brew and a bite to eat at one of the many participating establishments in the 650.

San Francisco Beer Week is here. The festival, which is a collection of smaller events at participating venues throughout the San Francisco Bay Area, runs from Feb. 11 to 20 this year and includes a number of participants on the Peninsula.

In light of the pandemic, SF Beer Week has suspended its usually enormous opening gala at the Ferry Building in favor of five smaller kickoff events, including one at Off the Rails Brewing Co. in Sunnyvale.

Tickets to the kickoff, on Friday, Feb. 11, are available for $50 from SF Beer Week’s website and include access to an unlimited number of 4 ounce servings of any beer on tap, food, and a commemorative T-shirt. Available at the kickoff events will also be all five of this year’s SF Beer Week collaboration releases. The releases — one each from the San Francisco, California Coast, East Bay, Silicon Valley, and North Bay chapters of the Bay Area Brewers Guild — are made by three collaborating breweries from each chapter.

After the kickoff, participating venues are holding special events all week, from limited-edition beer releases to live music and food trucks, and even a Super Bowl party.

Check out these Peninsula bars and breweries participating this year, and head to SF Beer Week’s website to see the full list of events around the Bay Area.

The beer can’s design attracted some controversy this week when early images of it appeared to use San Francisco street artist fnnch’s popular stencils of a bear-shaped honey container without permission from the artist. According to a follow-up statement from fnnch on Instagram, SF Beer Week and the graphic design agency responsible, Barretto-Co., resolved the issue and apologized.

On Saturday from 2 to 5 p.m.,, Devil’s Canyon is inviting brewers from across the state to show off their canned beers at the West Coast Craft Can Invitational. The festival, now in its eighth year, includes canned selections from twenty-eight California breweries. Drinkers will also be able to vote in award polls for best label design, best new discovery and an overall best in show. Food at the event will be provided by JW Catering, with a menu of wood-fired flatbread pizzas, wings, pretzel sticks with pub cheese, and bacon cheddar potato skins.

Tickets are available for $45 on Devil’s Canyon’s website. Non-drinkers and designated drivers will be pleased to know that they can attend at a discounted price of $15, which includes an all-you-can-drink supply of Devil’s Canyon’s root beer.

If you’re a fan of the strong stuff, don’t miss the release of Belmont brewery Alpha Acid’s Barrel Constrictor series on Saturday, Feb. 12. The beer, a heady oatmeal imperial stout that clocks in at a whopping 15% ABV, is brewed with brown sugar and aged in used bourbon barrels. Alpha Acid will be pouring eight versions of Barrel Constrictor aged in different barrels. Thankfully, you won’t have to do all that drinking on an empty stomach, as Redwood City food truck Taqueria Rincón del Cielo will be there serving tacos.

On Feb. 12, Alpha Acid will be pouring a limited release of Tiki Girl, a sour beer made with pineapple and coconut, which you can sip alongside skewers provided by Singaporean food truck Satay by the Bay.

In Redwood City, Freewheel Brewing Company is hosting its sixth annual Firkin Friend Fest on Thursday, Feb. 17. The event’s name is a nod to Freewheel’s focus on English cask ales, which is unique in the Bay Area — a firkin is a vessel that holds cask-conditioned beers, similar to a keg. For the event, Freewheel is inviting 12 brewers from around the area to take over their taps (although for a cask ale, the tap is called a hand pull).

Freewheel describes cask ale as “like nitro but with slightly more bubbles,” and the event will bring diversity to what can otherwise be a very IPA-centric week of drinking. Order up a plate of fish and chips to have alongside your pint of ale if you want the full English pub experience.

On Friday, Feb. 18, Freewheel will also release a collaboration with East Palo Alto’s Brewing with Brothas. The breweries have teamed up to brew a maple coffee porter, which will be on offer at the bar. 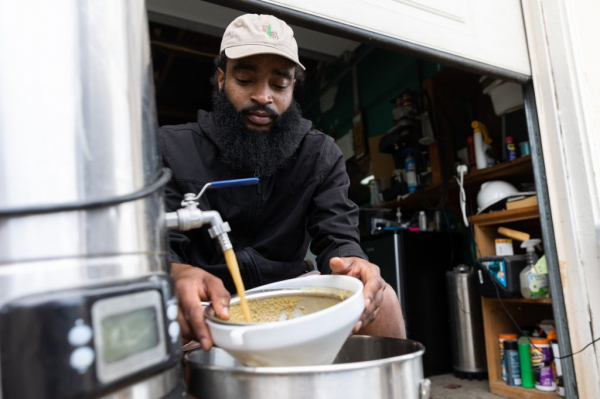 East Palo Alto’s Brewing with Brothas collaborated with Devil’s Canyon and ShaKa Brewing to produce the official beer of the Silicon Valley chapter of the Bay Area Brewer’s Guild. Photo by Magali Gauthier.

On Saturday, Blue Oak will celebrate its fifth anniversary with lots of beer, live music and the release of Father Francois, a barrel-aged quadruple Belgian ale that’s made in limited quantities and aged in bourbon barrels from Frey Ranch distillery in Nevada. “It’s gonna be a nice big party,” said Bryce Facchino, who works at Blue Oak.

To end the week, on Friday, Feb. 16, Blue Oak will release its limited edition Get Ready to Crumble, a tart and fruited sour beer reminiscent of a fruit crumble dessert. A limited number of canned four-packs will be available for sale at the brewery.

While you’re enjoying one of Blue Oak’s brews on their spacious back patio, grab food from one of the many food trucks that have taken up residence at the brewery. A full schedule is available on Blue Oak’s website.

Taplands in Santa Clara is hosting an event for breakfast (and breakfast beer) lovers on Saturday, Feb. 12. Stop by for a breakfast burger made with a glazed donut in place of a bun, and enjoy a “breakfast-inspired” beer such as Local Brewing Co.’s Belgian Bump, a strong ale with coffee, or New Glory Craft Brewery’s Breakfast Hustle, a golden stout that its brewers say tastes like “sweet cinnamon streusel coffee cake.”

On Feb. 19, Taplands is closing out SF Beer Week by handing over all of its taps to the 27 members of the Bay Area Brewers Guild’s Silicon Valley chapter. The event will be a great chance to sample offerings from some of the Peninsula’s smaller microbreweries, including Ghostwood Beer Company, Clandestine Brewing, Camino Brewing Co., S2 Alehouse & Brewery, Strike Brewing Company, and Taplands themselves.

Though Gourmet Haus Staudt in Redwood City may be best known for its Bavarian pretzel, sausage plates, schnitzel and liter steins of German lagers, the bar also pours an extremely well-curated list of craft beers and has a strong lineup of SF Beer Week events.

Most notably, Gourmet Haus Staudt is hosting a Lambic Extravaganza on Sunday, Feb. 13. During the event, the bar will pour beers from a number of cult favorite Belgian breweries such as Cantillon, including hard-to-find aged beer like a 1998 bottling from Drie Fonteinen brewery and a 2004 bottling of Iris, a beer brewed by Cantillon only once a year.

Throughout the week, Gourmet Haus Staudt will also be pouring beers in collaboration with Cellarmaker Brewing from San Francisco, Sante Adairius in Santa Cruz, and Russian River Brewing in Santa Rosa. 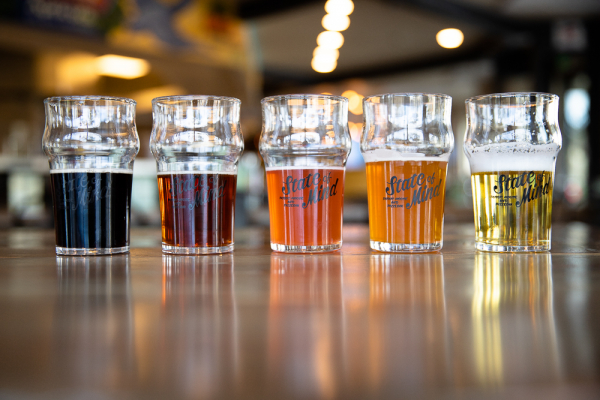 State of Mind’s beer list has something for everybody, from light lagers to deep, rich stouts, but IPA lovers will not want to miss their upcoming triple IPA takeover as part of SF Beer Week. Photo by Magali Gauthier.

Lovers of IPAs, football, or both will want to make their way to State of Mind Public House in Los Altos for a Super Bowl party and selection of triple IPAs on Sunday, Feb. 13 — strong, hoppy beers packed with flavor and character. State of Mind is advertising a “special surprise” of a mystery triple IPA from Russian River Brewing, but would not confirm whether this would be the brewery’s extremely coveted Pliny the Younger, which began shipping to bars this week. Though not as rare as Pliny the Younger, State of Mind’s Grandma Pie is also only available in limited quantities, so grab one if you can.

The following week, on Feb. 19, State of Mind will host a comparative blind tasting of two beer styles – West Coast IPA vs. Hazy IPA (also known as New England IPA). Customers can taste from a flight of six beers — two styles from three different breweries — before voting for their favorite beer of the night.

For SF Beer Week, The Refuge is diverting its usual focus on Belgian beers to make space for California craft breweries to try alongside their pastrami, cheesesteaks and burgers.

The Refuge’s sister locations in Menlo Park and San Mateo will also be participating in tap takeovers, so check out their Instagram post for details on what beers they’re pouring.

Hilbert is a registered user.

We need an audit of city spending
By Diana Diamond | 4 comments | 1,457 views