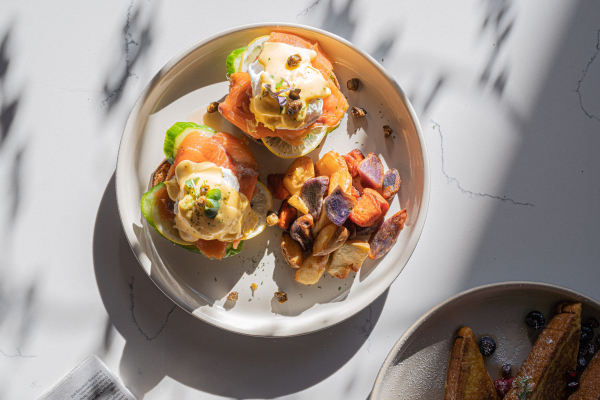 Walk down University Avenue and you might see a crowd forming in front of Palo Alto's newest brunch spot, Sweet Maple. The restaurant's original location opened in San Francisco in 2010, and images of their signature dishes still spread throughout social media. They hold a trademark on their most recognizable menu item: thick slabs of Millionaire's Bacon seasoned with brown sugar and cayenne.

Owner Steven Choi's restaurant group, which is best known for Asian-influenced brunch, is in the midst of expanding throughout the Bay Area from its roots in San Francisco, including upcoming locations in Cupertino and Mountain View. He even has a vision of opening locations across the country. Choi says that he picked University Avenue for this second location of Sweet Maple because he's always looking for "the most premium locations."

While many diners visit Sweet Maple for these creative dishes, Choi explains that his primary goal is to create a neighborhood restaurant that patrons can visit multiple times a week. "Maybe because of the decorations, because we care about the plating and presentation, people might think (our food) is trendy, but that's not what we're after," Choi says.

Alongside their Instagrammable creations, Sweet Maple serves breakfast classics like scrambles, eggs Benedict, and sandwiches. Choi hopes Bay Area residents can all find something familiar at his restaurants, and he credits his diverse staff for creating menu items that reflect many different cultures. Sweet Maple Palo Alto's head chef, Nick Yoon, has worked in kitchens preparing European, Japanese, Chinese, and Korean cuisines. Thanks to staff members like Yoon, Sweet Maple's offerings include fried rice made with the iconic Korean instant ramen Shin Ramyun alongside a version of huevos rancheros that stacks chicken breast on top of a poached egg, roasted salsa, and corn tortillas.

Sweet Maple is now open for breakfast and brunch and hopes to start serving dinner next month.

WhatAboutme is a registered user.


This restaurant sounds like something many will try -- I must why in the year 2022 why bacon is still 'a thing'.

Most everyone I know is either vegetarian or vegan.

Let's look at facts -- and I think may are aware of the horrible facts, what is it about BACON that human beings have to seem to succumb to eating an animal.


Eating bacon? It's in our genes and it tastes good.

Report Objectionable Content
Posted by ArtL, a resident of Barron Park,
on Feb 10, 2022 at 6:47 pm
ArtL is a registered user.


The menu items are creative, but the thought of bacon and even more, the smell of bacon is enough to keep me out of this place!

Report Objectionable Content
Posted by ArtL, a resident of Barron Park,
on Feb 10, 2022 at 6:47 pm
ArtL is a registered user.


The menu items are creative, but the thought of bacon and even more, the smell of bacon is enough to keep me out of this place!

Report Objectionable Content
Posted by Green Gables, a resident of Duveneck/St. Francis,
on Feb 10, 2022 at 7:01 pm
Green Gables is a registered user.


More bacon for me.

Report Objectionable Content
Posted by Moctod, a resident of University South,
on Feb 11, 2022 at 10:42 am
Moctod is a registered user.

I had lunch a few days ago at Sweet Maple with two friends. I had the BLT and it was very good. The fries on the side (yes, I know, they are not exactly the best thing to eat) were excellent- hot,thin and crunchy. Good fries are hard to find.

We ate outside at a sunny spot facing University. Good service and no smell of bacon in the air ;^)

Report Objectionable Content
Posted by Whatsit, a resident of Atherton: West of Alameda,
on Feb 16, 2022 at 2:00 pm
Whatsit is a registered user.