As the sun sank over Pillar Point Harbor on a recent Monday, the crowd grew in El Granada as people lined up at Breakwater Barbecue.

"It's my third time coming for this food," a fire chief said. "She's a genius at mixing flavors," a local business owner quipped. 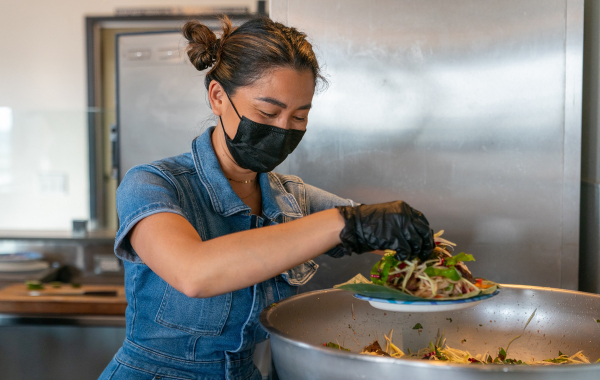 Sandy Thongsavat-Potter of Sandy's World of Eats prepares a papaya salad for a customer during her pop-up at Breakwater Barbecue in El Granada. (Photo by Adam Pardee)

The barbecue joint has indeed gained popularity for its craft barbecue across from Surfer's Beach, but Breakwater Barbecue's usual pulled pork and ribs weren't on the menu that day. Instead, the kitchen was the home base for a pop-up from Sandy's World of Eats, where Sandy Thongsavat-Potter and her team were spinning out paper plates covered with elegant green banana leaves, topped with papaya salad and Laotian-style sausage.

"It's a recipe I grew up with," Thongsavat-Potter says. But in her recent take on sai oua, she incorporated some original modifications. She teamed up with Breakwater Barbecue's pitmaster Wyatt Fields to stuff the sausages with pork butt, pork belly and brisket, as well as lemon grass, citrus, galangal and white pepper. Typically, sai oua might be grilled, Thongsavat-Potter says, but Fields suggested smoking it.

So they smoked 100 sausages, then briefly grilled them for a meaty bite that melts in the mouth. "It's a little sweet, a little heat, umami. It's a very unique taste." 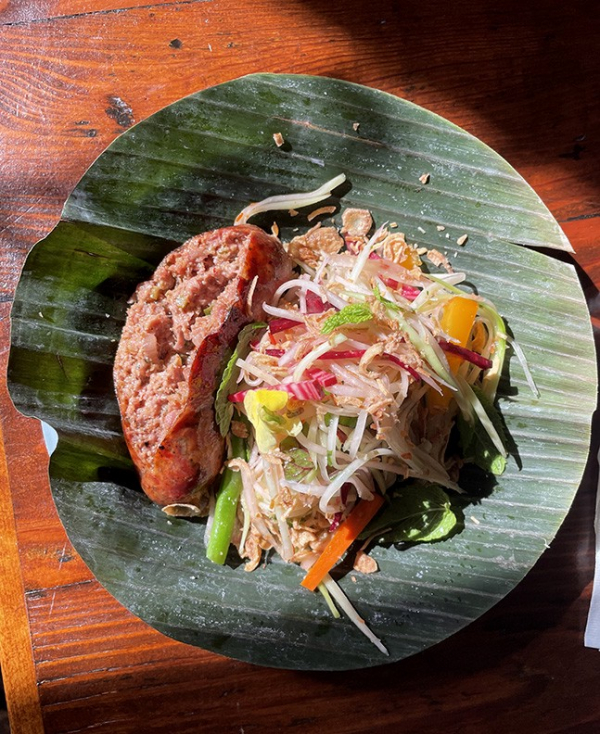 Bucking conventions like this has become part of Thongsavat-Potter's signature as a recipe developer. Last October, she launched her own food business during the pandemic. Since then, she's been introducing diners to Sandy's World of Eats, through pop-ups, pre-made meals and private events.

"I'm kind of a wild woman," she says. "I like to be out of the circle doing my own thing."

"Something I was born to do"
Thongsavat-Potter is no stranger to pivots. Before her independent food venture, she worked at Sutter Hill Ventures in Palo Alto, and then found a different calling at the Ritz-Carlton in Half Moon Bay.

"I took a little mosey, a little walk with my dog. I went into the Ritz and was like, 'Oh, I can deal with this,''' Thongsavat-Potter says. Over the course of almost seven years there, she worked at the luxury hotel as a hostess, oversaw food and beverage services, worked as a concierge and found an interest in guest services.

When her hours were cut back during the pandemic, she said, "I think I'm going to go after my passion, something I was born to do."

That something turned out to be sharing a love of food and Laotian culture. 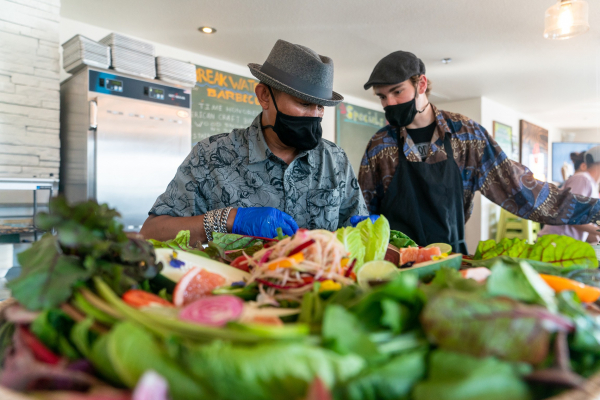 "It's humble beginnings. That's how my journey started with food. I don't have a professional culinary background," Thongsavat-Potter says. "It drives from being right next to my mom."

Distributing love, food and culture
Thongsavat-Potter was born in Thailand at a refugee camp in Nakhon Phanom. "My pops, Boun Senior, was in the Laotian army...His role was a (military) police officer. He fled the country to give Mama and I a better life due to communism and escaped a concentration camp," Thongsavat-Potter says, referring to repressive camps that forced "re-education" with communist indoctrination and imprisoned tens of thousands of people.

A sponsor family brought Thongsavat-Potter family to their first U.S. destination in Hereford, Texas, before they moved to California's Central Valley where her family sold homemade food in Merced and beyond.

Her parents converted a "Scooby Doo" style van into a mobile restaurant, taking it to different parks and neighborhoods. When they heard about food fairs happening, they'd register, pack up and travel up and down California to sell their fare for 50 cents or a dollar.

"My parents back in the day were slinging food out of that," Thongsavat-Potter says. Sometimes they'd take breaks from traveling and sell from home. "They'd take off the screens to the house, and people would pop up to the window and order papaya salads and noodle curry bowls." 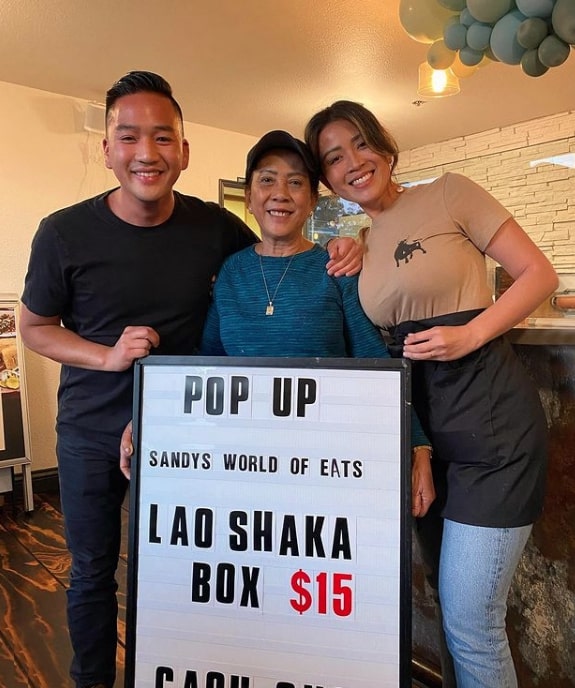 They shared khao poon with vermicelli, coconut milk, curry, mint, lime and cilantro, as well as nam van with coconut jelly, pandan, fresh fruits, coconut and maple date syrup. Everyone who came got fed; "It didn't matter what culture you were from," Thongsavat-Potter says.

Thongsavat-Potter recalls learning to cook with her mother, Somchanh. She stood on a wooden stool and learned how to make her first egg, chop and pack. She watched and learned as her mom made Laotian treats like sai oua, and helped stuff the sausages using the ends of recycled plastic bottles.

"We used to sit down on a Laotian saat mat because the tiles were coming off and the concrete was coming up. The woven mat made it feel like home. (My mom) laid that down, and we'd have a big pa kao dish and we'd hand stuff the sausages.

"Here I am, just chasing after it now," Thongsavat-Potter says. "Even without that much, what my mom did and poppa did, we always gave food to families. We always distributed the love and our food and our culture and shared it with other people."

Helping others, particularly those impacted by Vietnam War-era events in Laos, is something Thongsavat-Potter remains passionate about, including through the September 18 Legacies of War benefit event in Berkeley. "As a Laotian immigrant, and also first generation coming to the States, I hope to see more of the unexploded bombs cleared out of Laos and create a safer future for the next generation. I live here in the States, but Laos is my root," she says. 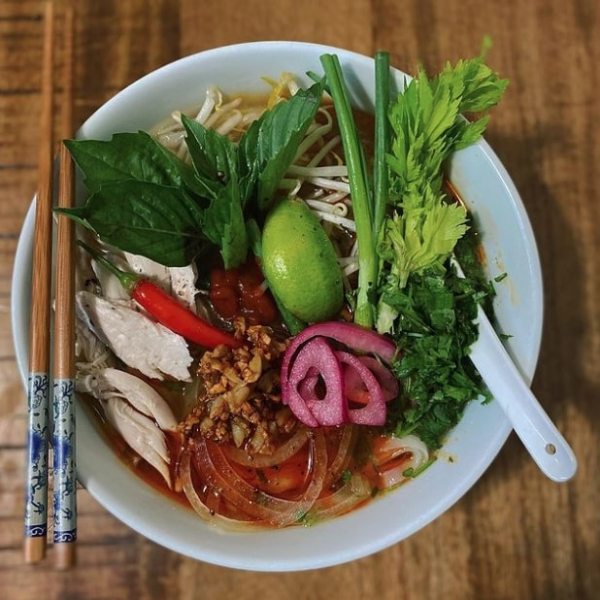 
She's also driven to support community through Sandy's World of Eats, which she's grown out of Half Moon Bay where she lives with her husband, Craig, and their two boys. She connects with other Coastside creators to source her ingredients and share her food.

"I'm a community person…It's a little rough right now for people, and human kindness is just so important. We all need to support each other," Thongsavat-Potter says.

A recipe for success
When she launched Sandy's World of Eats, Thongsavat-Potter reached out to friends, learning about their experiences with services like Blue Apron and pre-made meals. Then she started to make her own, making her dishes available through the Coastside's Rebyl Food market, and started to do private chef work for weddings, quinceañeras and other events. 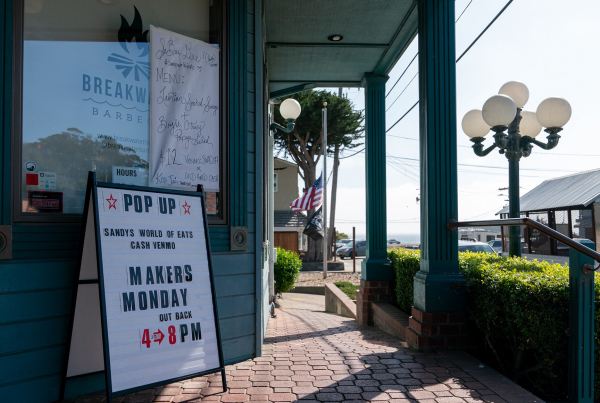 Sandy's World of Eats has popped up as part of the Makers Monday series at Breakwater Barbecue in El Granada. (Photo by Adam Pardee)

As Breakwater Barbecue was also getting established after it opened in 2020, Thongsavat-Potter would visit and drop off her Laotian-inspired dishes to Fields.

"It was always super amazing," Fields recalls. Like Thongsavat-Potter, he didn't come from a culinary school background. Remembering his start collecting different gigs, he invited her to use Breakwater Barbecue's kitchen. "I said, 'Why don't you do a pop-up here?'" Fields says.

Sandy's World of Eats kicked things off with smoked brisket pho, and has since drawn a following with dishes like pork belly, sticky rice, heavenly beef and pho with poached chicken.

"I feel very blessed that Wyatt believed in me and asked me to start doing pop-ups at his place," Thongsavat-Potter says. "The community is gold."

Thongsavat-Potter says that she's inspired by different cuisines and the tastes of her clients, treating her menus like canvases that people can add to from their own artistic palettes.

"I try to keep it very cultural. I cook everything from all around the world. I try to use the best of everything in the most resourceful way," Thongsavat-Potter says. "I literally eat everything — except baby corn. That's not my thing. No baby corn for me." This leaves her with a wide range of other ingredients to bring her visions to life. "I try to use different spices and flavors, and expand people's palates."

Whatever cuisine Thongsavat-Potter cooks, she adds her own influence. "I try to incorporate some Asian spices into there because I love my roots."

For a quinceañera, Thongsavat-Potter made horchata with pureed coconut, and a hibiscus agua fresca with chiles. For a pop-up at Breakwater Barbecue in June, she cooked up Laotian-inspired carnitas with eggplant puree, garlic fire-roasted tomatoes, Thai basil chimichurri, chili oil and shallots.

"A lot of love goes into this," she says.

Full circle
At her pop-up on August 30, Thongsavat-Potter's team kept up with a constant stream of customers, many of whom have become regulars.

Next to sleek stainless steel bowls was her family's woven bamboo pa kao, laden with a papaya salad dressed with tamarind, fish sauce, shallot, lime, palm sugar, chiles and "just a pinch of sea salt," another of her mother's recipes. 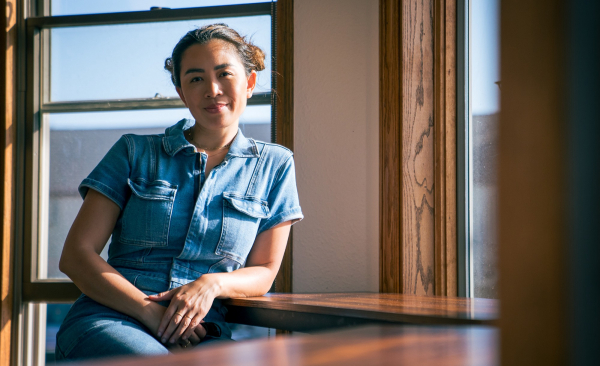 Sandy Thongsavat-Potter, founder of Sandy's World of Eats, poses for a photo at Breakwater Barbecue in El Granada. (Photo by Adam Pardee)

"She's the original papaya queen," Thongsavat-Potter says of her mom, who's celebrating 34 years in business as The Papaya Lady.

As Thongsavat-Potter dreams about her own food truck to take to Off the Grid or a restaurant where she can serve her own ramen or pho, she says she gets to do what she loves because of the community's support.

"It's humbling. I never thought I'd be doing a full circle back to how I grew up," Thongsavat-Potter says. "All I'm out here to do is to spread the passion of my food, connect people and make sure they're glowing and growing together."

Some of the best jobs around
By Sherry Listgarten | 4 comments | 2,425 views

People and Relationships Never Stop Being a Work in Progress
By Chandrama Anderson | 1 comment | 1,346 views