View all posts from Jessica Zang

Magical Bridge Foundation: a pillar of support during hard times

Magical Bridge Foundation, a nonprofit dedicated to inclusion and equity, has always recognized that each family’s unique situation is solely their own. Their mission is to provide all people, regardless of age or ability, with a place to play together. While physical playgrounds are now off limits, the organization has actively continued to work for their community, becoming a pillar of support for families with members who have disabilities as well as those without.

In 2015, CEO and founder of Magical Bridge, Olenka Villareal, and Executive Director and founder Jill Asher came together to build the very first Magical Bridge Playground in Palo Alto. Villareal came to the idea after observing the struggles firsthand when visiting playgrounds with her second daughter, Ava, who was born with an undiagnosed disability. She realized that conventional playgrounds had little to no accommodations for people of different ages and abilities, which led to isolation and discomfort in many public playspaces. The two founders strove to change that fact with Magical Bridge playgrounds, whose many features are intentionally designed to be universally accessible.

“We really want to underscore the fact that, in our playground, everybody belongs,” Villareal said, “When a person walks or rolls through the entrance, they know they’ve been considered, and in the end that’s all we hope for.”

One feature with intentional design, the signature fence that Magical Bridge installs around every playground, also happens to harbor benefits with the current social distancing restrictions.

“The fence is an expense that we as a foundation feel strongly about, because guests that have autism may run out of open playgrounds and get lost,” Villareal said. “Now, with COVID-19, we are aware of more benefits of having an enclosed space: limiting numbers and letting you count the visitors. The way that our designer has created these playgrounds is really ingenious, not only for including everybody but also designing for the unknown.”

Since the arrival of the coronavirus in March, Magical Bridge Playground has been off limits as a precaution to avoid large gatherings and potential transmission of the virus. As such, the signature summer concerts and weekend activities held at Magical Bridge were unable to continue. However, Magical Bridge refused to let social distancing measures take away the joy that frequent visitors experience during trips to the playground. In lieu of in-person events, Magical Bridge immediately organized their daily virtual concert series from March 21 through May 31, amassing thousands of views worldwide.

“It became very clear that a lot of our community, especially those with family members with disabilities, became more socially isolated after the coronavirus shut down our playground,” Asher said. “We know that music brings great joy to families, so we immediately started our virtual concert series: free, family friendly concerts every single day at noon.”

Another recently launched project was the Magical Bridge Diversity, Equity, and Inclusion (DEI) teen board, funded by a grant from the City of Palo Alto. The board, composed of teenagers with and without disabilities, researched different topics of diversity and inclusion, and members came out with their own projects and discoveries, which are now posted on Magical Bridge’s YouTube channel.

“We are excited that, when they go back to school, these teens can bring some of what they’ve learned to make their school and their community a more welcoming place for everyone at every stage of life,” Asher said.

Yet another project in progress is Magical Bridge Kindness Kits @ Home, a program in collaboration with Changing Perspectives, a nonprofit organization in Vermont. Changing Perspectives aims to teach children to view differences as something to celebrate, instilling values of inclusion and diversity at a younger age. The goal of the project is to create activities that inspire meaningful conversations about inclusion and kindness for children with developmental levels from pre-kindergarten to 5th grade.

“The Kindness Kits offer to the community something that inspires more inclusive thinking,” Villareal said. “We want to help individuals recognize that many people with disabilities live in every community around us, and that we can be inclusive in how we interact with people and everything that we do.”

In addition to all of the recent projects underway, Magical Bridge has continued to build playgrounds in many Bay Area towns, including Redwood City, Sunnyvale, Mountain View, Santa Clara, and more. They recently announced the groundbreaking of their second playground at Morgan Hill, and are excited to be working overseas on an international playground as well.

“These are things that we have to look forward to,” Asher said. “Maybe it will look a little different, but we will be together again. And that is going to be wonderful when we reopen our communities.”

Despite the special circumstances, Magical Bridge continues to move forward in becoming a helping hand for their community, and both founders have remained steadfast in their motivation and loyalty to the cause.

“Ava is the reason that I started this adventure, and she’s a reminder that one little person can really start something wonderful,” Villareal said. “We hope that with each playground, we can show by example what you can do if you really try to serve everyone.” 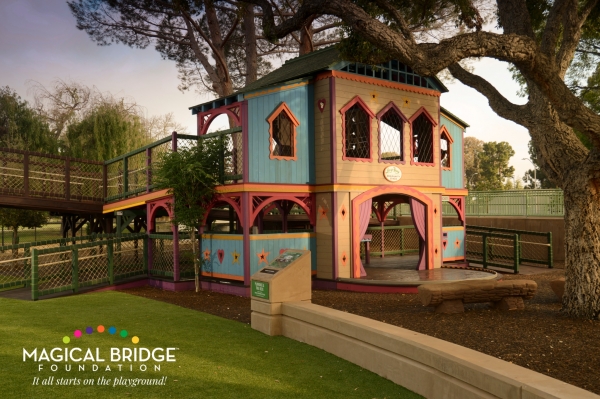 In these difficult times, it is so great to see young people believing in kindness!

Report Objectionable Content
+   13 people like this
Posted by Olenka Villarreal, a resident of Community Center,
on Jul 28, 2020 at 10:25 am
Olenka Villarreal is a registered user.


We thank Jessica for celebrating the work of Magical Bridge Foundation with this well-written blog.

Along with many other Kindness Ambassadors who volunteer with our foundation, we appreciate Jessica's passion for more inclusion and diversity in a community. She is a wonderful example of why I love working with our local teens, who give me great hope about the nation's future leaders!


I was deeply moved by what Magical Bridge Foundation has been doing during the current pandemic. We have been to its playground in Mitchell Park, and totally enjoyed the experience. Their Friday night concerts, with kids and adults from all over the neighborhood, and singers and volunteers, emitted sheer joy and harmony.

During a time of severe virus spread, racial conflicts and economical inequality, Magical Bridge's message and action of inclusion, equity and kindness are so welcomed and needed.

Thanks Jessica for writing a nice blog about this wonderful story.

Report Objectionable Content
+   6 people like this
Posted by joycerey, a resident of Crescent Park,
on Jul 29, 2020 at 2:50 pm
joycerey is a registered user.


Thank you Jessica for your lovely and informative article.

Our original Palo Alto Magical Bridge playground and its related programming are indeed a local treasure and serve as a model and an inspiration to other cities near and far as a kind and welcoming place for All Abilities...All Ages...All Sizes. And I hope that other cities build on the wonderful Kindness Ambassador program to which you and so many local teens have contributed their time and received so much satisfaction.

Dating/Dating Profile: Say What You Are Looking For
By Chandrama Anderson | 0 comments | 2,458 views