Uploaded: May 27, 2020
John Shelsta, whose flaky croissants, morning buns and ganache-filled kouign amann have drawn a loyal following for years, has finally found a semi-permanent home for his Love for Butter pop-up.

In the next few weeks, Shelsta will start selling his pastries out of downtown Palo Alto French restaurant Zola on a more regular basis through the end of the year. Zola often hosted his pop-ups in the past; Shelsta knows owner Guillame Bienamé from their time together in the kitchen at the now-closed Marché in Menlo Park. 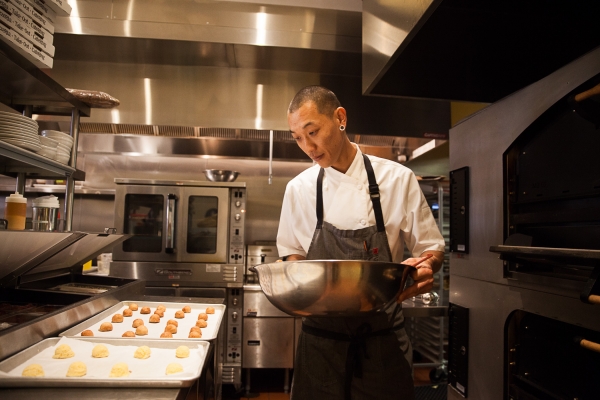 John Shelsta in the kitchen at Howie's Artisan Pizza in Redwood City in 2015. Photo by Michelle Le.

Shelsta, a self-taught chef who grew up in Menlo Park, has run Love for Butter sporadically for seven years. His resume includes time at Marché and Howie's Artisan Pizza in Redwood City and an apprenticeship with San Francisco pastry chef Belinda Leong of B. Patisserie. He most recently oversaw pastry at the Michelin-starred Mourad and Aziza in San Francisco.

This spring, though, Shelsta was planning a major life change. He was about to move to his native Korea when the coronavirus hit and upended his plans. During the first week or two of the shutdown, he started getting messages from old customers urging him to bake again. He wasn't sure that he would.

But the requests kept coming, so he decided to do one pop-up out of Howie's in Palo Alto for Easter weekend. It quickly sold out. So he did another, and another, and kept building on the menu, adding more pastries, meal kits and a CSA farm box option. He noted that pastries and bread shift easily to takeout, though he's had to adapt the pop-up to the times. He releases the menu through his newsletter, with online ordering, cashless transactions, scheduled pick-up times and social distancing reminders.

"For that two, three, four minutes of interaction we had, it was a little bit of normalcy for everyone," he said. "Even finding food has been a stressful point for people. Bread and pastry is something completely different. It's a complete indulgence.

"It really has been a form of comfort and a little bit of happiness and way to disconnect from what's going on," he added. 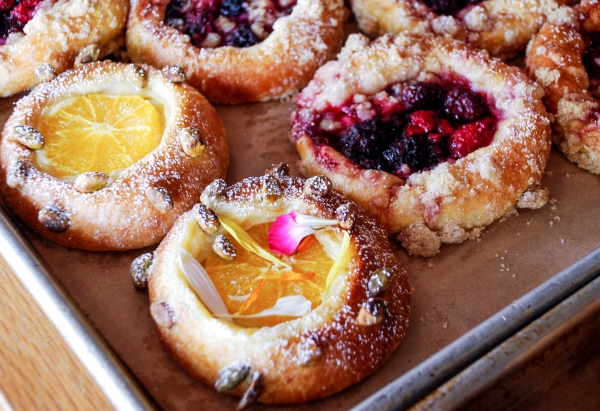 The shutdown has opened unexpected doors for Shelsta, who said he's working on collaborations with local restaurants and chefs (many of whom are out of work due to the shutdown). He sees community-driven partnerships as one key piece to the puzzle of restaurant recovery post-COVID-19.

"I do believe the only way right now that restaurants and small businesses are going to be able to survive is if we really come together and … figure out what the community needs," he said. "By supporting each other, it will help us all weather this storm."

Customers have asked Shelsta to open a brick-and-mortar bakery for years, but he's been careful — even wary — of growing too fast. For him, a short-term sublet at Zola is a safer investment than signing onto a costly, long-term lease for a full space. The restaurant space, which he'll have in the mornings, will also allow him to expand his offerings. (An egg McMuffin-esque breakfast sandwich on a sourdough English muffin and Korean fried chicken sandwich are in his, and our, future.)

"It's just a very unique time for the pop-up and the potential moving forward," he said. "The world's telling me that I've just got to give this a shot and go for it." 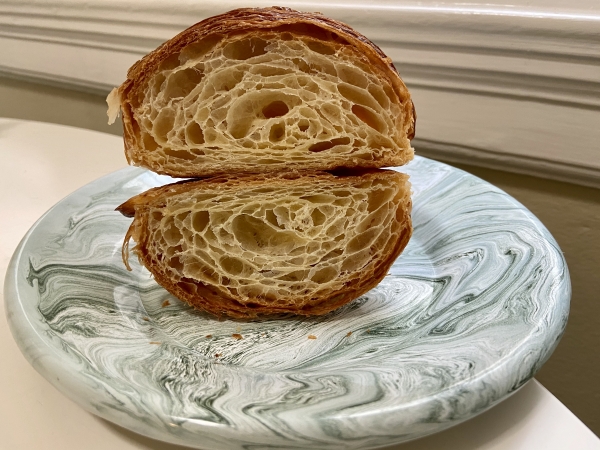 The honeycomb interior of a hand-rolled Love for Butter croissant. Photo by Elena Kadvany.

While he waits for all of his baking equipment to arrive at Zola, Shelsta will be selling smaller quantities of pastries over the next month or so. On Monday, for example, he offered kouign amann, banana fosters bread, Valrhona chocolate toffee cookies and a brioche tart filled with goat fromage blanc, strawberry, spiced pistachios and nasturtium.

To stay in the loop about these sales and Shelsta's schedule at Zola, email loveforbutter@gmail.com for his newsletter or follow his Instagram.

Report Objectionable Content
+   1 person likes this
Posted by Erich, a resident of Blossom Valley,
on May 27, 2020 at 2:31 pm
Erich is a registered user.


Web Link redirects to a password-protected page. Any other way to sign up for the newsletter? Thanks!

Report Objectionable Content
+   1 person likes this
Posted by MidtownMom, a resident of Midtown,
on May 27, 2020 at 3:37 pm
MidtownMom is a registered user.


Erich, one of his IG posts says to email loveforbutter@gmail dot com to get the newsletter


I am so excited that Jon is going to be baking on a regular basis! We missed his old pop-ups when he moved north and I was thrilled to see him back in the area!
I can't wait for the pastries especially his kouign amann!


Speaking of Shake shack, somewhere on your blast, or your bio, this reminds me that my first time at Shake shack was in New York where I was checking on the former Palo Alto weekly reporter and a former intern at Earthwise productions and in fact her band the babysitters club played in a miniseries i produced along with fittingly a band called spoon, Rachel Metz. Mazel tov to all the next generation Metz music marketing mavens in training. Actually I was impressed by an article Rachel Metz wrote about a band and she called their sound a tiramisu.

Report Objectionable Content
+   3 people like this
Posted by wander3r, a resident of Community Center,
on May 28, 2020 at 3:26 pm
wander3r is a registered user.


Ack! How did I not know about this man and his pastries?! OTOH, it's probably best that I didn't, otherwise the COVID 19 would have become the COVID 30.


Having attended some of the pop-ups in the past, I am looking forward to getting to enjoy these pastries more regularly! Also, you had me at Korean Fried Chicken sandwich!

The Nut House is back -- with a self-taught chef and Palo Alto native in the kitchen
By Elena Kadvany | 14 comments | 6,008 views

Some of your comments on nuclear energy
By Sherry Listgarten | 21 comments | 4,997 views

My bystander's experience with PAPD
By Jessica Zang | 29 comments | 3,041 views

Public statues: Up or down? But does the historical importance of the individuals represented matter?
By Diana Diamond | 31 comments | 2,904 views