Uploaded: Jan 15, 2020
The windows of Pluto's at 482 University Ave. are dark, and a sign posted to the front door says the longtime salad and sandwich eatery is "temporarily closed for a refresh."

It's not clear whether Pluto's will reopen. The owners did not respond to requests for comment. The restaurant's phone line has been disconnected and its website is down.

Other locations appear to have closed at the end of 2019, including the original Pluto's in San Francisco's Marina District and one at San Jose's Santana Row. Pluto's in Chico, Sacramento, Davis and Roseville also closed in recent years, according to news articles. 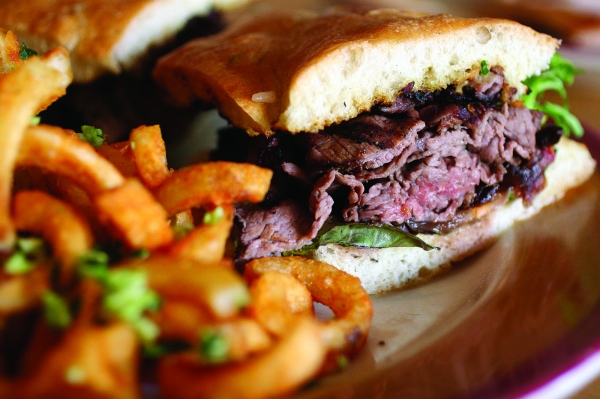 The grilled tri-tip sandwich at Pluto's in Palo Alto. Photo by Veronica Weber.

Louis Kimball and Gerry Bugas opened the first Pluto's in 1995. The create-your-own salads and sandwiches model, Pluto's said, filled "a much-needed niche in the vast nothingness between fast-food and full-service restaurants."

That "vast nothingness" is now overloaded with fast-casual dining options. In Palo Alto, Pluto's competed with Sprout Cafe and Sweet Green, plus counter-service eateries like Lemonade, Curry Up Now, Onigilly and Mendocino Farms.

Pluto's was in the ground floor of the President Hotel Apartments, whose new owner plans to convert the building into a luxury hotel.

Some customers lamented the closure online.

"This is very sad. Decent, comfort food that didn't cost an arm and a leg like most everything else around here," Alina S. posted on Pluto's Yelp page. "I've been coming here for 14 years and can't believe it's gone. It was one of the last mainstays on University."


Definitely will miss it. It was a fallback option whenever we decided we didn't want to cook at home, but didn't want to spend a lot for a decent healthy meal.


This is heartbreaking! I love their sandwiches and salads!


Alas ....restaurant endtimes.... come gather round people, wherever you roam and admit that the waters around you have grown... for the times they are a changin'


So so sad to see it go! I absolutely loved their turkey and salads!!! Lets hope they shall reopen!


I'm so sad about this. I went to UC Davis & lived in Sacramento then moved here. Throughout that journey the one constant, the one place I new I could get a spectacular turkey sandwich was Pluto's. If they need money I'd invest. God I love Pluto's. Time for PA to zone for restaurants like they zone against homes for people like me. Broken city of the elite.

Is this related? Web Link


This was my favorite place to eat on University Ave. Pretty much the last affordable place to eat. I hope they reopen soon


This is such sad news! They were my favorite for a casual lunch or dinner. I hope they reopen!


Extremely bummed, & will miss their salads & tritip sandwiches, have eaten there forever, & hope the staff land on their feet


I was also bummed to see the sign on the door Tuesday but thought it was actually temporary. I told my aunt we could meet at Plutos for lunch, a "very reasonably priced healthy place" and then we went and it was closed :(
What a shame. As another poster said, it was our go-to "I don't want to cook but don't want to spend $100" place since it first opened.


Thanks to Pluto's for so many delicious salads! I loved their creative salad toppings, especially the grilled fennel and the herb mix. The staff were also friendly and efficient--I got the impression that they enjoyed working there. Sorry to hear that they had trouble sustaining their business after so many years.

Report Objectionable Content
+   10 people like this
Posted by Singing Grandma, a resident of another community,
on Jan 16, 2020 at 3:20 pm


For many years when I worked at Shady Lane Gallery I would get a wonderful Pluto salad. Good quality and healthy and goodly quantity. Kept me going all day. It's sad that an affordable place with good workers has to close. We had to move 5 years ago and we are doing quite well in Sharon Heights Shopping Center. I hope Plutos will find another location as well.


I bet all the businesses on the ground floor of the President Hotel close.


I stopped going to Pluto's after I tried to tip a worker and he said "We aren't allowed to take tips". I responded with "It isn't like you are making $20/hr that you shouldn't take tips" to which he said "yeah". I know the workers were not making that much money and for the owner to forbid tip taking was just wrong.


It is always sad to see a good restaurant go. There are so many places to eat in Palo Alto, the city is hyperactive with them. Not only downtown, but the Town and Country, California Avenue, the Mall. Yes, some are expensive but there are places that offer delicious food at reasonable prices for most residents and visitors. I understand the mourning for Plutos but hang on a bit, another will pop up as Plutos did. When we first moved here from Boston, we found a downtown place that was a warren of little eating cubes (I forget the name) but it was a mecca of little eateries. (Maybe where the Apple store is now?) But next door is a tiny Thai restaurant that bucks the trend of $$$$. There will be others coming down the pike.


Well, my liberal friends... u all voted for more wages and benefits for workers than anyplace in the United states and a low density development real estate plan but you still want your low cost high quality food small business establishments... well... you are now getting what you asked for and deserved.... a world of very high priced fast food that you need to order from an app and clean up your own dishes.... welcome to the new World!!!

Report Objectionable Content
+   5 people like this
Posted by Waving Goodbye To Pluto's, a resident of College Terrace,
on Jan 21, 2020 at 4:21 pm


The 'newbies' will bemoan the closing of Pluto's...but older Palo Altans miss the times when it was 'Henry's' along with various other places like 42nd Street & Emerson Street Bar & Grill.

Same with California Avenue...the 'newbies' seem to love the Nut House but others miss the options of Talbot's & The Winery.


I'm not surprised to see the comment above that the owners didn't allow tips. I worked with a guy whose other job was at Pluto's. He told me they didn't get a discount on food, only a 1/2 off drinks. WOW. Even at fast food, most places give at least a 50% discount. Most restaurants will also have a family meal or allow workers to cook something to eat. At the very least they'd give you a free fountain drink which costs them a few cents.


One thing "newbies" won't be doing: installing neighborhood covenants that dictate "Whites Only." Clearly only those old-tyme, superior residents who can name drop closed businesses are able to come up with such atavistic principles.

As someone who has actually worked fast food (during high school). I've worked several minimum wage jobs in high school and college. Before that, I spent my childhood as a migrant farm working picking fields with my family.

I think that you do an injustice feeling sorry for people. We didn't pick fields because we HAD to. We actually CHOSE to do it. As difficult as they were, those were some of the best days of our lives.

Report Objectionable Content
+   8 people like this
Posted by Another resident, a resident of Old Mountain View,
on Jan 22, 2020 at 5:52 am

It would appear we have diminished the amount of fun that could be had if Palo Alto hadn't raised the minimum wage above Califorrnia's decree. Shame about that.

Clearly those who know how much they know should be aware of the temporary agencies who employ "undocumented" workers. The workers who are spread all over Palo Alto working for 4, 5, 10 years with a dollar raise. Meanwhile their charlatan boss charges $20-27/hour for them, depending on how long they have been at their contract site.

Everyone wins. The undocumented worker has a steady job. The company that normally would pay benefits to a 40 hour employee don't have to. Even paying $20+ an hour for these workers is cheaper than having them on board as a full time employee. Taxes, insurance, medical, being paid at the higher rate that actual employees get-those inconvenient costs sure ad up! ...

Equal pay would tarnish the best years of their lives. While we're at it, we should get all these cranky women to get on board and stop whining about being paid the "same" as a man. Certainly they also have made a choice to work--and stay--where they are employed

Report Objectionable Content
+   2 people like this
Posted by Nayeli, a resident of Midtown,
on Feb 20, 2020 at 4:07 pm
Nayeli is a registered user.

I'm not a "boomer." In fact, I'm probably not much older than you (and I might even be younger). You might want to take your ageist prejudice somewhere else.

The Nut House is back -- with a self-taught chef and Palo Alto native in the kitchen
By Elena Kadvany | 16 comments | 6,672 views

Some of your comments on nuclear energy
By Sherry Listgarten | 22 comments | 5,433 views

Public statues: Up or down? But does the historical importance of the individuals represented matter?
By Diana Diamond | 38 comments | 3,488 views

Stay Together or End the Relationship? Independence or Interdependence?
By Chandrama Anderson | 0 comments | 963 views