Maltz said she decided to close the 200 Hamilton Ave. shop "as the economics didn’t makes sense anymore," but did not provide further details. 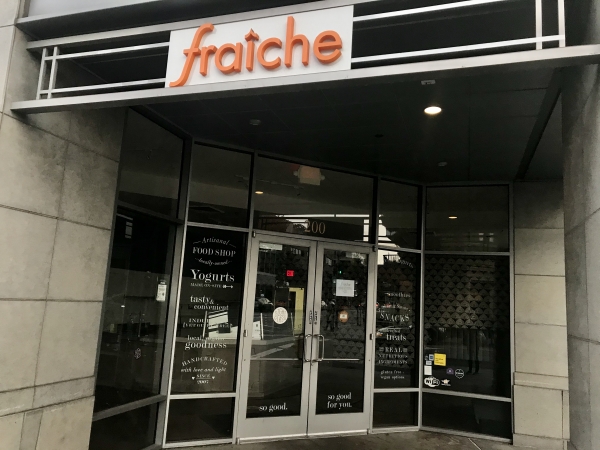 Fraiche went dark on Dec. 10, 2019, but will reopen next year in a new location. Photo by Elena Kadvany.

The original owners, Patama Roj and Jessica Gilmartin, opened Fraiche opened in 2007 on Emerson Street. The shop later moved to the larger space on Hamilton Avenue, where you could see the organic yogurt being pasteurized on site through a small window. Maltz has run the business since 2017, according to her LinkedIn page.

Fraiche's closure marks the end of a frozen yogurt era in downtown Palo Alto, which over the years was home to numerous fro-yo shops but is now dominated by ice cream.

The Stanford Hospital Fraiche has been over a year in the making, Maltz said. It will be similar to the Fraiche at the San Francisco International Airport, which serves frozen yogurt as well as smoothies, juices, salads, soups and other health food.

The new Fraiche will be located on a public promenade between the new and old hospitals. La Baguette, the nearby French patisserie at the Stanford Shopping Center, will also operate an eatery on the promenade, according to Stanford Health Care. Cafe Parisien will serve baguette sandwiches, soups, salads and pastries.

Business improvement district tax = $100 per employee. Parking tax = $720 per employee to park on city streets already built and maintained using gas taxes. Increase from minimum wage = $5 per hour x 2000 hours or $10,000 per employee. The net is that a 9 employee small business pays nearly $100,000 more, each year. That's why the "economics don't make sense". You have to sell a lot of frozen yogurt just to break even, and it makes it just about impossible to make a profit.

Report Objectionable Content
Posted by jUlie armitano, a resident of Downtown North,
on Dec 19, 2019 at 11:05 am


iT is really sad it close.
My Family liked that yorgurt place.
I will miss it.

Report Objectionable Content
Posted by Member, a resident of Downtown North,
on Dec 19, 2019 at 3:33 pm


I am livid.
This is my favorite yogurt place in the entire world.
I go here every single week.
I cannot believe this is happening to me. I am truly devastated - this is the ultimate tragedy.
I am in total shock. I am pissed.


Building on the corner with huge clocks that can't tell proper time?

Some of the best jobs around
By Sherry Listgarten | 5 comments | 3,625 views

Fewer Michelin stars awarded on the Peninsula this year
By The Peninsula Foodist | 7 comments | 3,131 views

People and Relationships Never Stop Being a Work in Progress
By Chandrama Anderson | 3 comments | 2,060 views