The last day of business for the 917 Main St. restaurant will be this Saturday, Sept. 28.

"We want to thank all of you for coming to The Striped Pig and supporting our venture," they wrote. "We don't know what the future brings, but we will let you know if we start something in a new location." 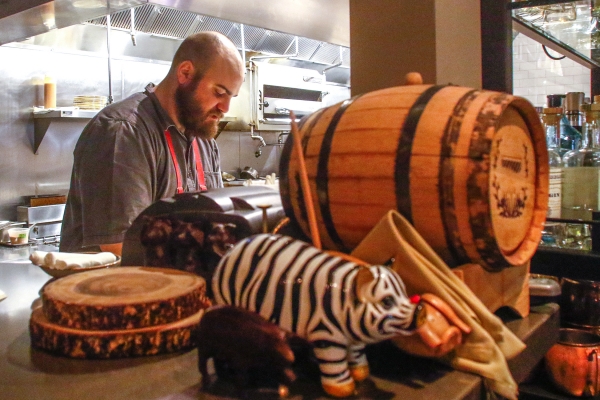 The Striped Pig Executive Chef Andrew Mitchell prepares a charcuterie plate in the kitchen, decorated with a statuette of the restaurant's namesake. Photo by Veronica Weber.

Andrew Mitchell and Al Pachecho lead the Striped Pig kitchen. Mitchell earned a degree at the California Culinary Academy in San Francisco and cooked locally at John Bentley’s in Redwood City, Kaygetsu in Menlo Park, the now-closed 231 Ellsworth in San Mateo and Station 1 in Woodside. Pacheco trained at Le Cordon Bleu in San Francisco and worked in Michelin-starred restaurants, including The Village Pub in Woodside and Madera in Menlo Park.

The Striped Pig's focus is on small plates and craft cocktails. It was named after a prohibition-era rum runner who sold tickets to see his striped pig by offering a free mug of rum.


@Elena, if you are "perpetually hungry", maybe you should consider eating some real food instead of kale salad 3x a day?

As to the restaurant and small store closings across the region: If you want to stop that, you first need to stop the subversive socialists letting CA go to hell with their stupid rules and taxes. Good luck!

Report Objectionable Content
+   7 people like this
Posted by Amused Socialist, a resident of Duveneck/St. Francis,
on Sep 28, 2019 at 1:57 pm


Real Food, really? Elena went into the Striped Pig for kale salad? Do you even know what a restaurant critic does?

However, I do so agree with you! If we just got rid of stupid rules and taxes, I'm sure landlords would stop gouging rents and developers would invest in small restaurants and stores!

I recommend that you read Gail Collins, who actually knows how to write humorously and well...


Really enjoyed the Striped Pig. Sad to see it closing.


RealFood, perhaps you're the one who needs to find new fare - pretty weird to randomly insult a journalist for the information she's providing you for free. Socialist indeed!

Report Objectionable Content
+   1 person likes this
Posted by Resident, a resident of Another Palo Alto neighborhood,
on Sep 30, 2019 at 8:31 am


I have never eaten at this restaurant, but I am getting very tired of hearing of popular places closing due to high rents, high staffing costs and the difficulty of getting staff. This is causing us, the public, less choices and more difficulties in getting adequate options for what should be a simple pleasure, eating away from home with family and friends.

In my own experience over the past few months I have found that dirty seating areas, unswept floors around tables that have not been wiped down, and condiment stations out of ketchup, napkins or other essentials. I don't mind bussing my own table, but having unkempt seating areas should not be what we expect.

Whether we are eating fast food, custom made sandwiches, or just a lite bite at an affordable restaurant, our standards and expectations are being lowered. We would not expect this type of service anywhere else in the country. Unfortunately we are being forced into it being thought of as the new normal in this area.


Woodside Deli also. This is so sad. But I do have to agree with resident. I am a local resident/home owner and visit many of these establishments during the week and occasionly on the weekend. What I have noticed over the years is untidy restaurants even in local coffee shops, spilled cream or spilled sugar, dirty seats, dirty floor ,employees standing behind the counter but the restaurant or the common area is not maintained. Hey I just paid 17 bucks for a sandwich and a drink and you can't make sure that my seat in my table or wiped down. ????? So I just do not go back . They keep this up, we all eventually will stay home and eat . I can barbecue and sit at a clean table for half the cost.

A Pragmatic Approach to A Trillion Trees
By Sherry Listgarten | 1 comment | 3,109 views

The University of California’s flexible policies during COVID-19
By John Raftrey and Lori McCormick | 6 comments | 2,227 views

Repairing a Disagreement with your Beloved & “Physical” vs. “Social” Distancing
By Chandrama Anderson | 1 comment | 1,894 views