Chocolate chip cookies from Manresa Bread in Los Gatos and Los Altos, for example, will be blended into Shake Shack’s popular frozen custard. The cookies — made with house-milled whole wheat flour and Valrhona chocolate chunks — wowed Shake Shack Culinary Director Mark Rosati on a trip to the Palo Alto area. 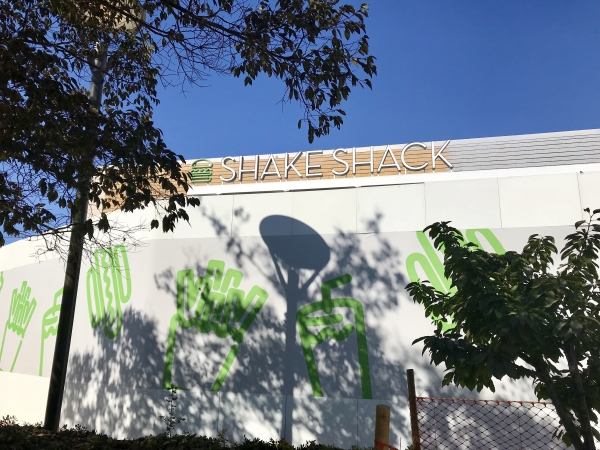 When Shake Shack decides to open in a new region, he said he sets out to explore with the question in mind: "If I moved here tomorrow, what would my daily routine be like?" Where would he get his morning coffee and pastries? Where would he go for a great glass of wine?

"When we go into a new city we try to find food that we get exited about," Rosati said in an interview.

Shake Shack will also use Dandelion Chocolate from San Francisco in an all-chocolate "concrete" dessert made with chocolate custard, fudge sauce, chocolate truffle cookie dough and chunks of chocolate, all topped off with chocolate sprinkles. There will also be a vanilla custard concrete made with pieces of seasonal pies from Pie Dreams Co. in Fremont. 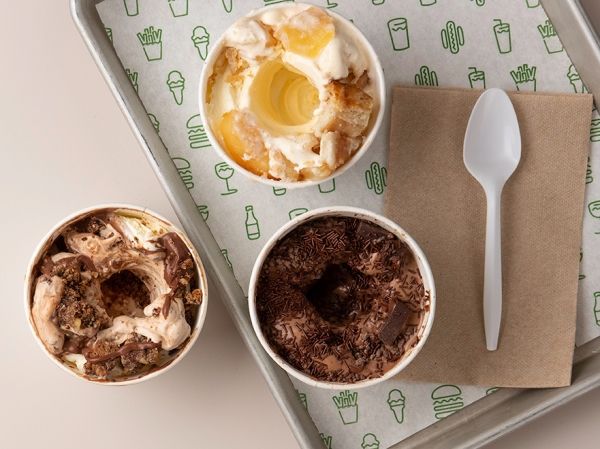 The Palo Alto location — Shake Shack’s first-ever in Northern California — will also have a special, brand-new burger created from local products: the "Golden State Double," with a patty made from Moraga-based Richards Grassfed Beef in partnership with Cream Co. Meats in Oakland, white cheddar, smoked garlic aioli and bread and butter pickles from McVicker Pickles, all on a sweet potato bun from Tartine Bakery in San Francisco. 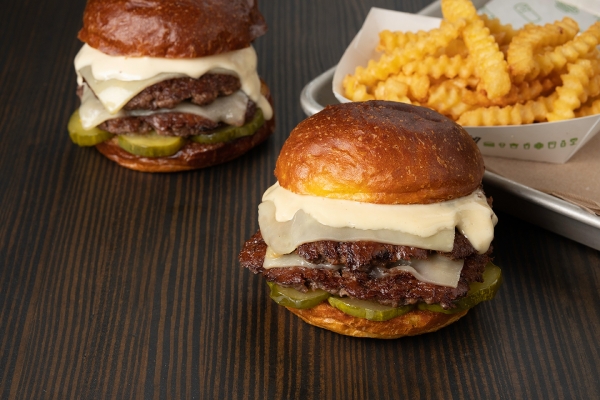 The "Golden State Double" burger will only be available at the Palo Alto Shake Shack. Photo courtesy Shake Shack.

"It's something very different than most people have seen from Shake Shack," Rosati said.

There will also be local beer and wine from "exclusive" partners, including from Fort Point Beer Co. in San Francisco, Broc Cellars in Berkeley, Brea Wine Co. in Colorado (a natural wine company) and Robert Sinskey Vineyards in Napa.

Rosati described the Bay Area’s food and wine culture as "feverish and unique." The ultimate goal with the Palo Alto menu, he said, is to offer the Shake Shack classics while also honoring that local culture.

"This is a very exciting opening for us, the entire company," Rosati said. "(We're) making sure the menu embraces all the classic food ... while at the same time taking a couple different directions that are going to feel like the Shake Shack ethos and DNA but expanding idea of what Shake Shack can be."

Shake Shack is currently under construction at the El Camino Real shopping center, in the former Well's Fargo space next to PF Chang's. It's set to open this fall.

Founder Danny Meyer, who opened the first Shake Shack in New York City more than a decade ago, is a renowned restaurateur and CEO of Union Square Hospitality Group in New York City.

We are excited! And if the SS management is reading, might we suggest some forays into vegetarian and vegan options?

Report Objectionable Content
Posted by DannyP, a resident of Another Palo Alto neighborhood,
on Sep 28, 2018 at 11:19 am
DannyP is a registered user.


Did you in fact know that Shake Shack's very FIRST store in Northern California was IN FACT in Campbell up until recently? Research it and see! Campbell shut them down within months of opening. They gave Shake Shack a hard time throughout the process. Yeah. Facts.

Report Objectionable Content
Posted by @DannyP, a resident of Another Mountain View Neighborhood,
on Sep 28, 2018 at 12:44 pm


The restaurant you're thinking about in Campbell was Steak & Shake, not Shake Shack. Research it and see!

Report Objectionable Content
Posted by Member, a resident of Barron Park,
on Sep 29, 2018 at 7:12 am


Thank you for regurgitating an article that SFgate and SFeater already wrote two weeks prior.


Can't wait for it to open. The burger options in Menlo Park are very underwhelming. I plan on heading to Stanford Shopping Center to give Shake Shack a try :)

Report Objectionable Content
Posted by More Fast Food Options, a resident of Adobe-Meadow,
on Oct 2, 2018 at 10:01 am


Enjoy, but don't think it's got any less saturated fat and salt as any other fast food place. It's on the upper end of quality, but still should be enjoyed in moderation. It's a place that will make you fat and unhealthy if you go there too much.


Report Objectionable Content
Posted by Robert, a resident of another community,
on Oct 4, 2018 at 12:20 pm


Those fries look like the kind you get out of the frozen foods section of your supermarket - hope they taste better than they look!

Report Objectionable Content
Posted by Shake Shack Love, a resident of Stanford,
on Oct 9, 2018 at 5:12 pm


I've eaten at 10 different Shake Shack locations. Its the only burger I eat now adays. So when business or personal travel takes me near one, the anticipation of getting a treat is so worth it. Single shack with cheese and a concrete, flavor of the month. Cant wait for this one to open.


any update on the opening date?


Today, October 30, 2018, I went to the Shake Shack location at the Stanford Mall. It was totally hollowed out and looked like it won't be up and running for at least a couple more months. Maybe a Christmas grand opening? Until then, I'm still happy with the burgers and shakes at Gott's.

Report Objectionable Content
Posted by Hank Lawrence, a resident of Menlo Park,
on Nov 5, 2018 at 1:04 pm


The best burgers in the world are just outside the Arizona State University Campus at a little hole in the wall place called the Chuck Box. Their Mesquite broiled burgers are the gold standard and you can get them with cheddar cheese. Best tasting burgers period.

Arya Steakhouse, a standby for steaks and Persian cuisine, moves to downtown Palo Alto
By The Peninsula Foodist | 0 comments | 2,664 views